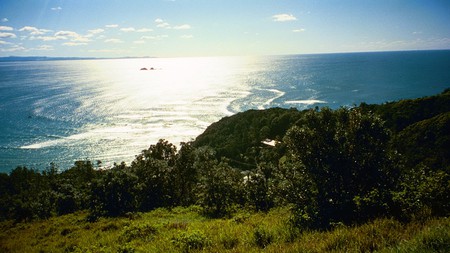 The amazing Northern Rivers region is largely untouched and has the perfect mix of rolling country hills and bustling coastal towns – not to mention the incredible waters in the form of rivers, ocean and tea tree lakes. Here are nice reasons Australia’s Northern Rivers area is unlike anywhere else in the country.

These aren’t your typical hippies, these guys have money and no one really knows where it comes from. They are immaculately dressed in pristine yet casual linens, wear Birkenstocks, run tiny bespoke businesses and live in stunning beach shacks with white walls and jute rugs lining the floors.

2. The country meets the ocean

We’re not sure which view is more stunning, the coast line, still unspoilt in many parts, or the lush rolling hills. Either way, within 20 minutes of each other you can visit a small country town in a lush backdrop or the bustling Byron Bay for a surf.

3. So many incredible beaches

Almost the entire coastline in Northern NSW is dotted with incredible beaches and beach towns. If you’re a local, you’ll have your favourites but some of the best are Watagos, Kingscliffe, Yamba, Evans Head and of course Byron Bay – always worth the trip.

Being such a beautiful part of the world, some fantastic chefs have taken to the area too. Everything from fine dining, like Fleet at Brunswick Heads, to casual brekkie at The Farm in Byron Bay can be found in the Northern Rivers.

The best sourdough on the planet 🌏 by The Bread Social – made with Australian ingredients that are as local as possible. That might be why it tastes so good! 📷 @thebreadsocial #Bread #Sourdough #Fresh #HotBread #ByronBay #GrowFeedEducate #TheFarmByronBay

5. Close enough but far enough away

The serenity you will feel in the Northern Rivers will make you feel like you’re in the middle of nowhere, but if you need to catch a flight or just easy access to the city, you are right near the highway to take you to the Gold Coast or Brisbane.

Unlike almost everywhere else in the country, you’re generally safe from the loud purr of a Holden Commodore revving its engine. Unless they’re passing through on the way to the ‘Goldie’ of course.

Just a few hours north and you’re in south east queensland where it’s hot all year round, and a few hours south you’ve got long, cold winters (although the summers make up for them). The Northern Rivers region is the best of both worlds, with all four seasons – beautiful in their own right.

The sparkling waters of the Northern Territory, North Queensland, South Australia and Western Australia are like none other but they do come with their fair share of risks – sharks, crocs, stingers etc. Unless signed, you’re generally safe to swim in the crystal waters of the Northern Rivers region, whether it be creeks, rivers, the ocean or lakes.

The towns spread throughout this region are so unique – every one is cuter than the last, with fantastic food and boutique options like Yoli and Otis and Little Winnie (where all the pristine linens come from). So much character in one small(ish) area.

so so happy to see our little pieces sitting pretty in this cosy children’s nook at the NEW & now open @habitat_byronbay woman’s store!! this space has so many beautiful brands involved, so stoked to be part of it ✨