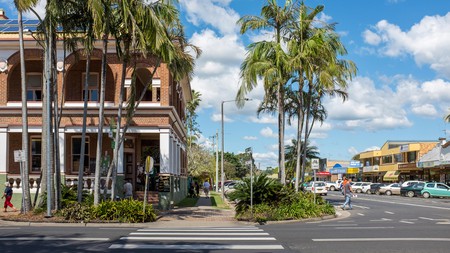 Set on an idyllic stretch of Australia’s east coast, Byron Bay is the perfect base for exploring more of New South Wales. Plan these nine top day trips from the town to hike through national parks, summit mountain peaks, visit hippy destinations and discover some of the world’s largest crystals.

Soak up the bohemian vibes in Nimbin

Where: One hour and 15 minutes from Byron Bay

Once a quiet farming town, Nimbin was crowned Australia’s hippy heartland when it hosted the arts and counterculture Aquarius Festival in 1973. Browse Nimbin’s alternative shops and galleries while looking out for anti-conformist slogans scattered around town. Highlights include the Nimbin Aboriginal Cultural Centre, monthly craft market and nearby Nimbin Rocks, created by volcanic eruptions 20 million years ago and a sacred site for the Bundjalung people. 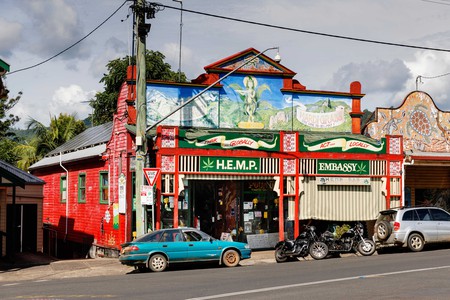 Where: One hour from Byron Bay

Visit Wollumbin National Park to hike Mount Warning, which is the highest peak in northern New South Wales and the first place to see the sunrise in Australia. On a clear day, you can see Byron Bay’s striking lighthouse from the 1,156m (3,793ft) peak. The 9km (6mi) track is a popular one for residents and tourists but takes up to five hours to complete, so take plenty of supplies and wear sturdy shoes. Along the way, you’ll hike through four different types of rainforest home to Aussie wildlife. 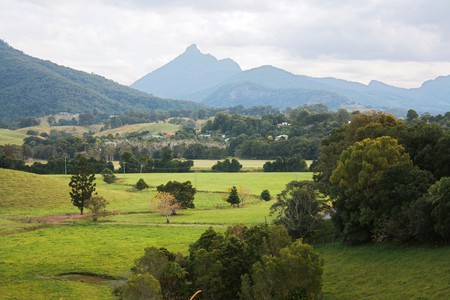 Where: 25 minutes north of Byron Bay

Come to Mullumbimby, known locally as Mullum, for its spas and laid-back village feel. Picture art galleries, yoga studios and a palm-tree-lined main street, all set against a backdrop of mighty Mount Chincogan. Mullumbimby is often touted as ‘the biggest little town in Australia’, offering a bonanza of bohemian stores, chocolate shops and a Friday market. The Mullum Music Festival puts the town on the map every November, while The Kiva Spa is the ideal place for a chilled afternoon. 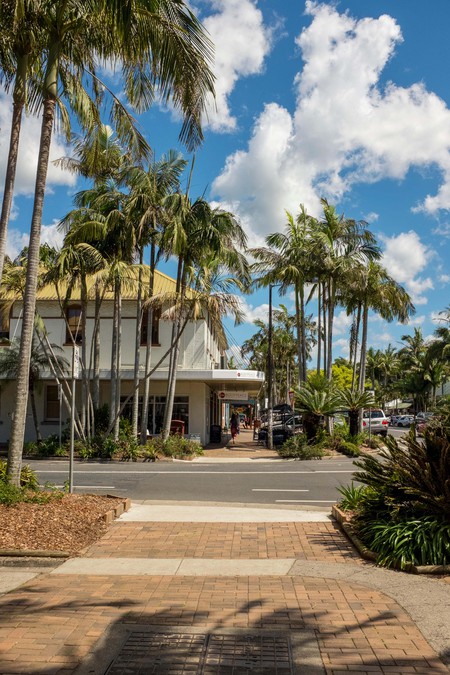 Where: One hour and 15 minutes from Byron Bay

Venture into a World Heritage-listed rainforest at Nightcap National Park, set in the dramatic Nightcap Range. The area is filled with eucalyptus trees, native plants, hiking tracks and wildlife. The best way to experience the park on a day trip is at Minyon Falls lookout, which has picnic areas, barbecue facilities and views of water cascading into a gorge. After a bite to eat, you can follow the Minyon Falls walking track down to the base of the waterfall, where there’s a pool for swimming. 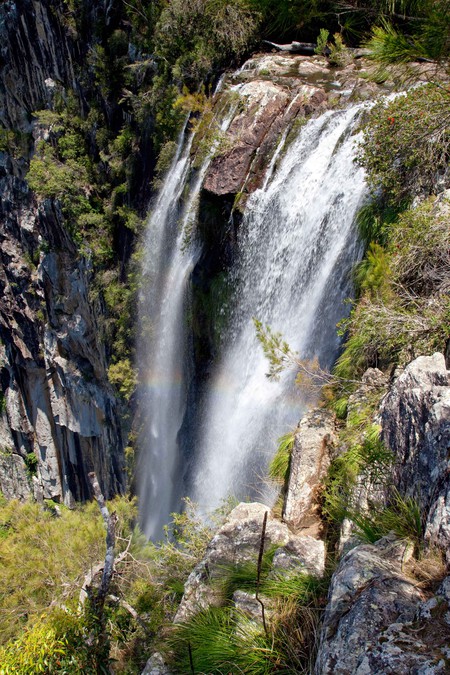 Where: 25 minutes from Byron Bay

The Crystal Castle and Shambhala Gardens are home to some of the largest and most beautiful crystals in the world. Wander five hectares (12 acres) of botanical gardens on the Buddha Walk, which will take you to the world’s tallest geodes – two 5.5m-high (18ft-high) smoky quartz crystals. Follow paths lined with hand-carved statues and visit the Kalachakra World Peace Stupa, which has been blessed by the Dalai Lama. There’s also a labyrinth based on an ancient design to explore and the Lotus Cafe, where you can enjoy some vegetarian food. 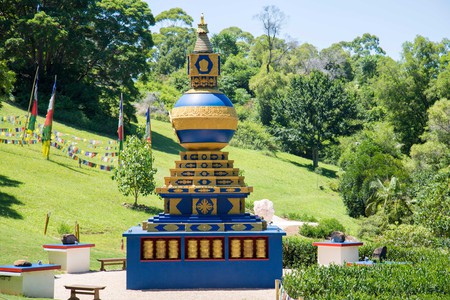 Take to the water at Brunswick Heads

Where: 20 minutes north of Byron Bay

This coastal village sits at the mouth of the Brunswick River and draws canoers, kayakers and fishers to its shores. It’s a prime place for dolphin watching, or you can take an eco-cruise along the river to get up close to wildlife. Surrounded by beaches, Brunswick Heads is part of a protected natural reserve where you can snorkel to see underwater treasures. Check out the walking track at Brunswick Valley Heritage Park, which is home to 300 species of rainforest plants, and trawl the vintage shops in town. 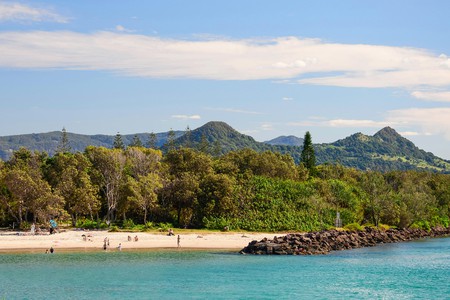 Where: One hour and 30 minutes from Byron Bay

Drive over the border into Queensland to visit this national park, which was formed by a volcanic eruption 23 million years ago and is part of the Gondwana Rainforests of Australia World Heritage Area. Drive the Twin Falls Circuit for waterfall viewpoints, and then tackle hiking trails with views over volcanic gorges and azure swimming holes. Stay until dusk to see fireflies and a colony of glow-worms at Natural Bridge, a rock arch formed by water crashing into a cave. 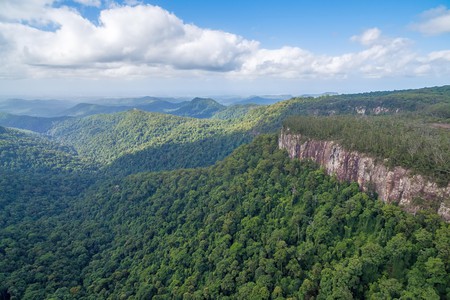 Where: One hour and 40 minutes from Byron Bay

If you love surfing, take a day trip to Yamba, which is surrounded by 11 beaches with consistent waves. Set at the mouth of the Clarence River, you can also do some kayaking or simply stroll around the small town, which is said to have one of the best climates in the world. Head to Angourie Point Beach to see the Blue Pool, a forested freshwater swimming hole, or explore the Angourie walking track for coastal views. 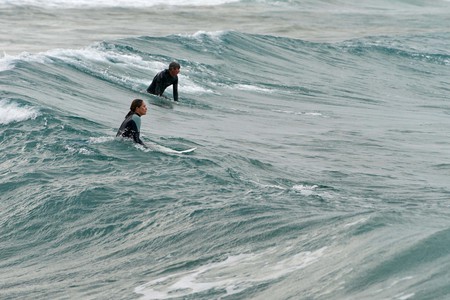 Where: One hour and 40 minutes from Byron Bay

Located in the Gold Coast Hinterland, Mount Tamborine is a tiny town set in a national park of the same name. The town itself has some independent boutiques, galleries and craft shops and is close to a host of breweries, wineries and the famous Tamborine Mountain Distillery. If there’s time, visit the national park, which has a collection of walking tracks, waterfalls and lookout spots, including the 45-minute Rainforest Skywalk. 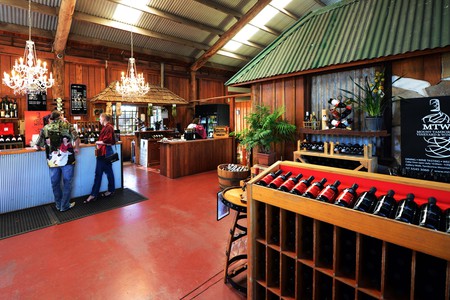