While the Australian state of Queensland is well-known for its sun-soaked tropical islands, the islands off the coast of New South Wales are unparalleled in their diverse wildlife and rugged, windswept beauty. With outdoor activities such as snorkelling, fishing and scuba diving and accommodation options ranging from camping to beachside luxury apartments, these islands are lesser-known by tourists and brimming with adventurous opportunities.

Settled peacefully in the Tasman Sea between Australia and New Zealand, World Heritage-listed Lord Howe Island is so timelessly beautiful that the description gifted to it by National Geographic in 1935 as the most beautiful spot in the Pacific is still justified, even 80 years on.

With few cars on the island and a maximum speed limit of 25 km/h, Lord Howe transports you back to the Australia of the ’50s, when neighbours hung over their fences to chat with each other and children played barefoot in the streets. The first thing to do on the island is to get yourself some wheels – of the two-kind variety. Bicycles are the easiest and most scenic way to get around and familiarise yourself with the island.

Activities on Lord Howe Island are based around the stunning scenery characteristic to the island – think hikes, bike trails and boat rides. There’s plenty of different hiking routes for every kind of fitness level. Ron’s Ramble is an easy guided walking tour though the fairy-tale Valley of the Shadows and aptly named Clear Place with long-time local Ron Matthews, who walks your through the different flora and fauna of the area. Goat House Mountain is another popular trek, taking about three hours return. Valley of the Shadows attracts its fair share of bird watchers on the lookout for snow-white terns, endemic woodhens, silver eyes and golden whistlers.

After your hike, take a well-deserved dip in Ned’s Beach, where an honesty box system lets you hire a mask, snorkel and fins to explore the rockpools edging the bay. 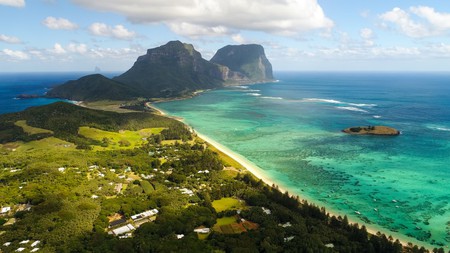 Did someone say ‘glamping’? A short but scenic ferry ride from the centre of Sydney is Cockatoo Island, one of Australia’s most interesting historical sites and the largest island in Sydney Harbour. You can take an audio tour that will take you through the island’s convict history, from the construction of the prison barracks to its shipbuilding days in World War Two. Stop for some refreshments at Societe Overboard Café and take in the breathtaking 360-degree harbour views, hire a boat for a paddle or even play one of the most scenic games of tennis you’ll ever play by hiring the court.

Cockatoo Island is the only island on Sydney Harbour where you can stay overnight. There are luxury houses and apartments available to rent, but if you really want to maximise your experience staying on the island, you can’t go past the glamorous tents set up on the harbour’s edge. They do all the hard work, setting up the tents and your bedding, and each tent is cosily kitted out with comfy beds and luxurious toiletries from Appelles Apothecary. All the glampers have access to hot showers, of course – we aren’t primitive.

Cockatoo Island is open daily and entry is free – no matter what taste of adventure you seek, this compact island will cater to it. 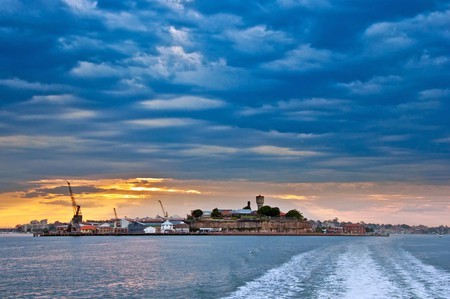 Cockatoo Island is not shaped like a cockatoo. | © Bishwambers Photography / Shutterstock

Just a skip and a hop north of Sydney, in the middle of the sparking Hawkesbury River, Dangar Island is so peaceful and quiet, you won’t believe the bustling Sydney CBD is a mere hour away. With no cars to disturb the natural tranquility, you’ll want to stay longer than just a day trip. They use wheelbarrows to haul supplies from the ferry and distribute them around the island. There’s only one cafe on the island that doubles as the general store, and a bowling club which has a bar attached (the essentials, of course). The island’s community hall boasts all the activities to draw in the island community, such as children’s film workshops and a weekly ‘men’s shed’. It’s the only island with permanent residents on the Hawkesbury River, with around 300 people living on the island, preserving its beautiful natural assets and Aboriginal history.

You can circle the island in around two to three hours, along the 3km bushland path that lines the water’s edge. Visit the island’s clear, quiet beaches, and make sure to visit the Aboriginal rock art that line the caves along the path. Before white settlement, Dangar Island was known as a gathering place for Guringai Aborigines for thousands of years. Evidence of their existence is still visible in the engravings and rock shelters scattered around the island.

Make sure to take your swimming costume for a dip at Bradley’s Beach. Located at the southern part of the Dangar Island, the quaint little bay is nice enough to swim year-round and is precious to the locals, so if you decide to pack a picnic to enjoy on the golden sand (which we would highly recommend), make sure you take your rubbish with you and leave nothing behind.

The ferry trip to the island is a leisurely fifteen minutes from the town of Brooklyn, stopping at the quaint Little Wobby Bay on its way. Ferries depart every hour seven days a week, making it totally possible to leave Sydney by train before 10am and be back in the city well before night falls. 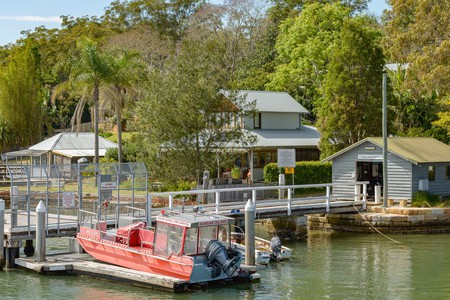 Accessible only by boat and the only place in New South Wales where you can camp with an active bird colony. With oodles of wildlife, windswept fauna and volcanic peaks, it’s a photographer’s dream.

The only way to stay on the island is by camping, and it’s a truly surreal experience. Located right in Myall Lakes National Park, Little Poverty Beach is the main breeding site for wedge-tailed shearwaters in Australia and camping there is your opportunity to have a front row seat to the natural spectacle. In the warm months of the year the birds enter their underground burrows at night, firstly to hatch and then to care for their single chick. Growing up, the young birds are left alone for long periods while their parents feed. There’s plenty of opportunities for water activities, if the azure blue waves are calling out to you – whether it be a swim, a fishing trip, snorkelling and or a scuba diving escapade, Broughton Island can cater to it. Esmerelda Cove is as magical as it sounds, with white sand beaches and nooks and crannies filled with hundreds of types of marine life to explore, you don’t even need to book a boat trip for a vivid snorkelling adventure. 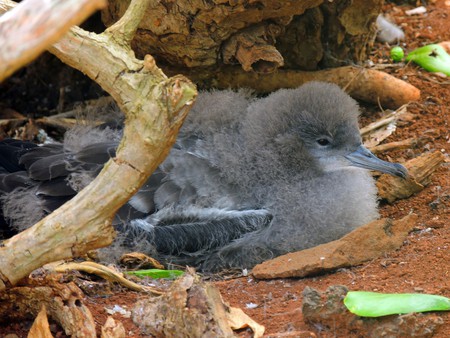 With just five campsites on the entire island, you’ll feel like it’s your own private Blue Lagoon setup (sans the stranded part). Mobile phone coverage is patchy and unreliable, and you have to bring all your own supplies, including water. If you want to make a real adventure of it, invite a group of friends and start your own series of Survivor.

There is a very simple tourism campaign that goes with Montague Island, and it’s a simple word – #unspoilt. If you’re looking to reconnect with nature and get your desk-ridden knees out into the open, start planning your visit to Montague Island. National Parks and Wildlife Service run day and overnight eco tours to the nature reserve, where you can join a penguin research project.

If the ocean is more your style there are endless dive and snorkelling tours. There are hundreds of playful fur seals in the crystal waters surrounding the island, as well as colonies of little penguins, just waddling around the island in their little tuxedos. They’re one of fifteen species of bird that nest on the island, so pack your binoculars for a spot of sophisticated bird watching.

During the whale migration season, humpbacks and southern right whales pass the island, with dolphins also coming up close to the boats. If fishing is your thing, the waters are packed with tuna, marlin and kingfish, with plenty of companies on the island offering specialised fishing trips. You can visit the island on a guided day trip, or stay overnight in the refurbished (but still exquisitely ye-old-worldy) Montague Island Lighthouse Keepers Quarters, which were built way back into 1881. The NSW National Parks & Wildlife Service manages Montague Island to maintain its windswept natural features and preserve its natural, European and Aboriginal history. After the vessel ‘Lady Darling’ was wrecked off Mystery Bay in 1880, the lighthouse on Montague Island was established to protect coastal shipping. First lit in 1881, and then converted to a fully automated system in 1986, it remains a part of NSW’s coastal navigation system and nautical history.

The historical Montague Island Lighthouse | © Bonnie_Johnson / Shutterstock
Give us feedback