5 Sports Teams You Should Watch in Sydney 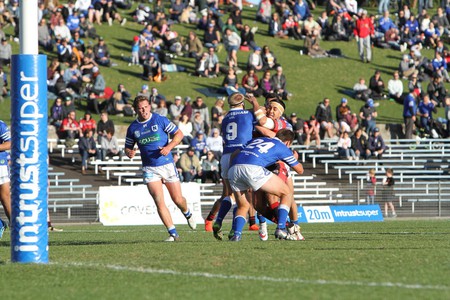 There aren’t many better ways to get an authentic glimpse of a city’s culture than heading to the stadium and observing how the locals consume their sport. So grab a cold beer, a warm pie, and explore Sydney’s sporting psyche by checking out these five sides.

Entering the gates of the historic Henson Park in Sydney’s industrial inner-west is like stepping into a sporting time capsule, frozen in 1983 when the mighty Newtown Jets still competed in rugby league’s top tier. Newtown were a founding member of the New South Wales Rugby Football League (NSWRFL) — the forerunner of the modern professional National Rugby League (NRL) — but were booted out of the elite comp when it expanded nationally in the 1980s. The Jets refused to die, though, and now compete in the second-tier NSW Cup, surviving as a symbol of rugby league’s working class suburban heritage.

A sunny winter’s Saturday arvo at Henson Park is hands down the best sporting experience you can find in Sydney, with cold tins of locally brewed beer and sausages sizzling on the barbecue, a dog friendly hill populated with young families on picnic blankets, an ice cream truck and jumping castle for the kids, and a huge range retro merchandise for footy fans with dewy-eyed memories of the good old days. Oh, and why are they called the Jets? Just wait until an A380 roars overhead en route to the nearby Sydney Airport.

The Swans were established as South Melbourne way back in 1874 but were relocated to the Harbour City in 1982, making them the first team to compete in the Victorian Football League — now the Australian Football League (AFL), the country’s biggest sporting competition — from outside of Victoria. It took a little while for the city to warm up to this alien code but Sydney-siders began to flirt with the Swans when they made their first grand final for 51 years in 1996 and the legendary Tony Lockett broke the all-time AFL goal kicking record in 1999… and it was a full-blown love affair by 2005 when they won their first premiership flag since 1933, then pocketed another title in 2012. Today, the Swans faithful routinely fill the stands of the Sydney Cricket Ground (SCG) with red and white, and — much to the chagrin of Victorian footy fans — are respected as one of the toughest clubs in the comp.

If rugby league’s Newtown Jets sum up Sydney’s working class, then rugby union’s Waratahs typify the city’s white-collar tribe, donning their finest boat shoes and pastel polo shirts to watch the Tahs compete in the international Super Rugby competition, which incorporates regional franchises from Australia, New Zealand, South Africa, Japan and Argentina. Well, ‘compete’ might be a generous description — with the exception of the triumphant 2014 season, when they beat the Crusaders in the Super Rugby final, the Waratahs have rarely failed to disappoint their long-suffering supporters with season after season of underachievement. On the other hand, the grassroots Shute Shield competition — the level below the Waratahs, made up of 12 teams around Sydney — is enjoying a resurgence because of the disillusionment surrounding professional rugby union in Australia.

Even supporters of Sydney FC would have to concede that the atmosphere created by their hated cross-town rivals is unique in Australian sport, which makes the Wanderers one of Sydney’s must-see sports teams. Sydney FC were the glamour side of the A-League when it was established in 2005-06 and many residents of Sydney’s working-class Western Suburbs found it too hard to get behind a glitzy side nicknamed ‘Bling FC’ playing out of the well-heeled east… so when Western Sydney were added to the comp in 2012-13, the rivalry was instant, heated and genuine. Sell-out Sydney Derbies have been a highlight of the city’s sporting calendar ever since, with those in red and black bringing plenty of passion for a multicultural region that’s been the engine room of Australian football for as long as the sport’s been played in this country. The Wanderers have been forced to move to Sydney’s Olympic Park for a couple of seasons while their home ground in Parramatta is redeveloped — a shift that’s done no favours for their vaunted atmosphere — but the volume at their new home will be something to behold.

The Big Bash League (BBL) — a Twenty20 cricket competition with eight franchises from Australia’s six state capitals — has lit up every summer since 2011-12, and the Sydney Sixers are the Harbour City’s chief franchise. It’s quite a sight to see the SCG bathed in pink when the Men in Magenta strut their stuff in the high-octane short-form cricket league that grips Australia for six weeks around Christmas. The Sixers’ BBL neighbours, the Sydney Thunder, play their matches at the Sydney Olympic Park for sports nuts who want to check out the scene of the fondly remembered 2000 Games.