21 Awesome Free Things to Do in Melbourne, Australia

If you’ve forgotten your wallet or it’s simply feeling a little light, don’t panic as you don’t need to be a big spender in order to see all that Melbourne has to offer. And while you will be charged for the city’s world-class coffee, the following 21 activities and attractions are free for you to enjoy.

Heading up St Kilda Road, you will come across a monumental bluestone building on your left. Designed by Sir Roy Grounds, the National Gallery of Victoria (NGV) has a collection of more than 73,000 works of art. Make your way through the arched entrance, behind the wall of water and towards the Great Hall to see the world’s largest stained-glass ceiling, which casts a kaleidoscope of colours onto the gallery floor. Aside from its permanent collection, NGV also holds exhibitions and special events such as the annual Melbourne Winter Masterpieces series.
Open In Google Maps
180 Saint Kilda Road, Melbourne, Victoria, 3006, Australia
+61386202222
Visit Website
Give us feedback

The State Library of Victoria is unmistakable. From the moment you first set eyes on it, you cannot deny its beauty; yet the outside can’t compare to the beauty contained inside. The domed La Trobe Reading Room is exquisite, with natural light pouring in through the dome skylights. The La Trobe Room does not disappoint in the evening as the soft light provided by artificial means draws you in. There really is no better place to read your favourite book. And you should have no trouble finding it with over two million books contained within the library’s collection; if that does not sate your appetite, then indulge in some of the thousands of newspapers, manuscripts, audio, video and digital material on hand that spans a century of Victoria’s culture and history. The State Library is also home to fabulous artworks and exhibitions with free guided tours available, too.
Open In Google Maps
328 Swanston Street, Melbourne, Victoria, 3000, Australia
+61386647000
Visit Website
Visit Facebook page
Give us feedback

Meander through the Queen Victoria Market 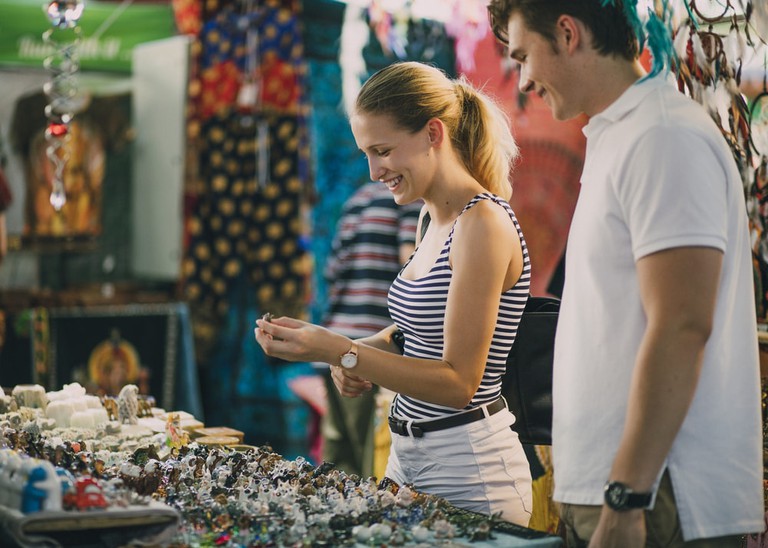 Located inside ACMI (the Australian Centre for the Moving Image) in Federation Square, Screen Worlds is a free permanent exhibition that tells the ever-evolving story of the moving image. The interactive exhibition features objects, props and memorabilia. This includes the original clock from Play School(1966–present), Cate Blanchett’s Oscar for her role in The Aviator (2004), and costumes worn by Kylie Minogue, Dame Edna and Heath Ledger.
Open In Google Maps
Flinders Street, Melbourne, Victoria, 3000, Australia
+61386632200
Visit Website
Visit Facebook page
Give us feedback

Melbourne locals love listening to live music. Fortunately, this is one activity you don’t have to miss if you’re strapped for cash. Cherry Bar, in the city’s ACDC Lane, calls itself ‘pretty much the best rock ‘n’ roll bar in the world’. It offers free admission throughout the week (on Tuesdays, Wednesday and Sundays), and often hosts big-name after-parties and rock stars. Another option is The Esplanade in St Kilda, which has free entry most nights and is the place to catch emerging rock acts. 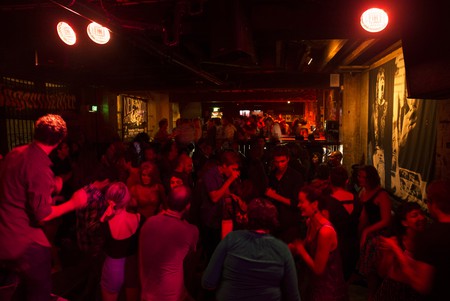 Go on a hunt for public sculptures

Deborah Halpern is one of Australia’s most celebrated sculptors. She’s know for her colourful mosaic sculptures; three of which are on display in Melbourne. There’s Angel (1987)at Birrarung Marr, Ophelia (1992)at Southgate, and Portal to Another Time and Place (2005)at Werribee Mansion. Other public sculptures to seek out in Melbourne include Bruce Armstrong’s Eagle (2002)and John Kelly’s Cow up a Tree (1999)in Docklands, Simon Perry’s The Public Purse (1994) outside the GPO building, and Petrus Spronk’s sinking building known as Architectural Fragment (1992) outside the State Library of Victoria. 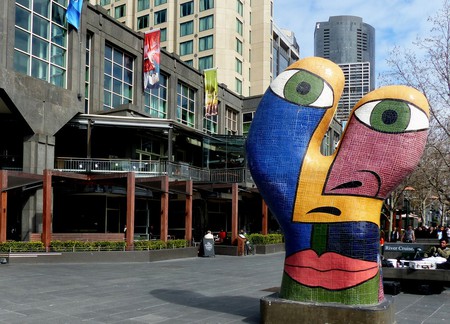 Wander through the Royal Botanic Gardens 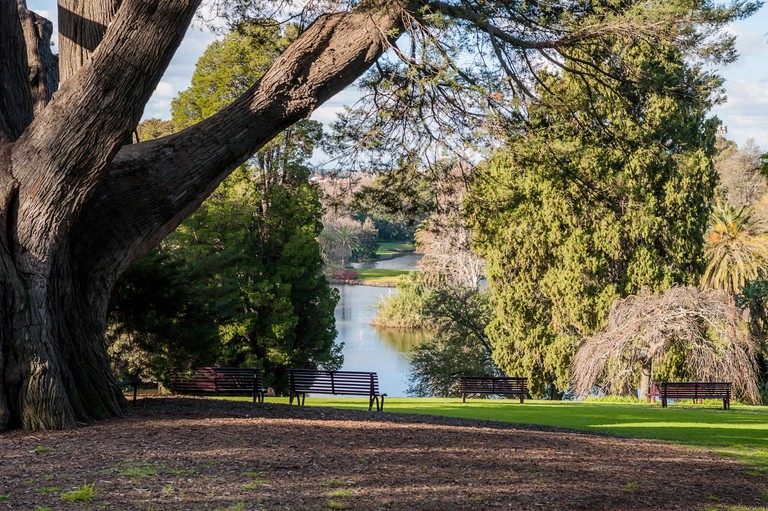 © Raymond Warren / Alamy Stock Photo
Escape the buzz of Melbourne’s city streets in the tranquil sanctuary that is the Royal Botanic Gardens. Spread across 94 acres, the sprawling gardens contain a collection of 10,000 plants – both native and exotic. With 11 lawns, there’s ample space to relax and unwind. There’s also a 3.8-kilometre (2.4-mile) walking track known as ‘The Tan’ that circles the garden.
Open In Google Maps
Royal Botanic Gardens Birdwood Avenue, Melbourne, Victoria, 3004, Australia
Visit Facebook page
Give us feedback

Get inspired at The Wheeler Centre

Stretching alongside the Yarra River from Princes Bridge to the Melbourne Exhibition Centre, the Southbank entertainment precinct includes some of Melbourne’s top restaurants, high-end retailers and Crown Casino. Stroll down the promenade where you’ll find buskers and gaze up at Melbourne’s skyline. At night, marvel at Crown Casino’s Gas Brigades, which send fireballs high into the sky every hour. 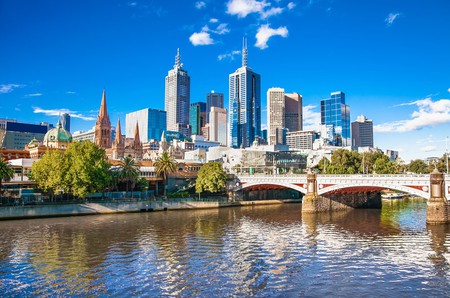 Take a ride on the City Circle Tram

Trams are an integral part of Melbourne’s cityscape. The free City Circle Tram allows tourists and Melburnians alike to travel throughout the city, hopping on and off as they wish. The fleet of historical W-class trams travels through La Trobe, Flinders, Spring, Nicholson and Victoria Streets, covering Melbourne’s central business district. There’s audio commentary on board as well; revealing the attractions at each stop, and interesting facts along the way. 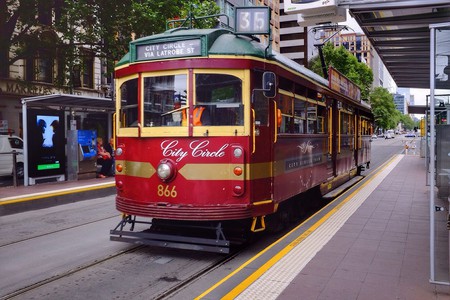 Find refuge in one of the city’s churches

Whether you’re searching for a peaceful refuge or seeking to admire architectural feats, Melbourne’s places of worship are worth a look. St Paul’s Cathedral is located in the heart of Melbourne’s central business district. Designed by English architect William Butterfield, the cathedral is built in the neo-Gothic transitional style. Nearby is the medieval-looking St Patrick’s Cathedral. You’ll also find St Mary Star of the Sea Church and St Michael’s Uniting Church. These holy houses are impressive to look at and spiritual to visit. 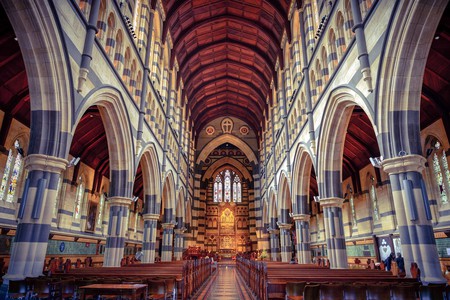 Learn more about Indigenous culture at the Koorie Heritage Trust

Located six kilometres (3.7 miles) southeast of Melbourne, St Kilda is an idyllic seaside escape only minutes from the city. Stroll down the shoreline to St Kilda Pier for some penguin spotting and breathtaking skyline views. The bustling nearby Acland Street is a great place to grab a bite, and on Sundays there’s a beachfront market too. You can also walk around Luna Park for free but, of course, the activities cost extra. 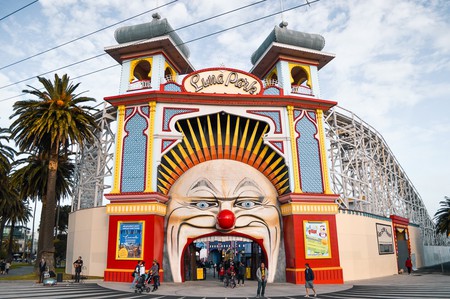 The best views of the city are found at a height, making rooftop bars the best spots to soak in a sunset and watch as the lights switch on across Melbourne’s cityscape. Siglo offers views of St Patrick’s Cathedral and Parliament House, as well as a range of sophisticated drinks. With other options like Madame Brussels and Naked in the Sky, you’ll be more than happy to treat yourself to a drink or two when the bar comes with a view. 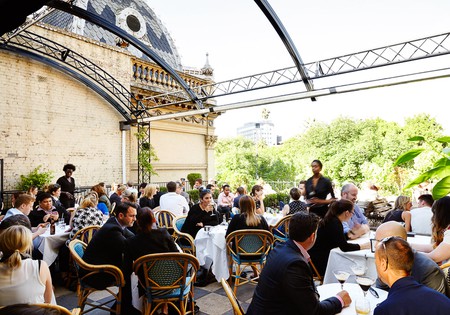 The labyrinth of laneways that snake themselves around Melbourne have become some of the most sought-after real estate for artists looking for urban canvases. Splashed in bright colours, the magnificent murals of Duckboard Place, as well as Hosier, Union and ACDC Lanes are open to artistic expression and make for Instagram-worthy backdrops.

Douglas A-20C Boston A28-8 on display at the RAAF Museum | © Bidgee/WikiCommons
Only 25 minutes from Melbourne, the RAAF Museum details the story of Australian aviation and is completely free to visit. Tour the hangars and see the permanent exhibitions and displays. The interactive Flying Displays are where you can witness heritage aircraft take flight every Tuesday, Thursday and Sunday.
Open In Google Maps
480-490 Point Cook Road, Point Cook, Victoria, 3030, Australia
+61383486040
Visit Website
Visit Facebook page
Give us feedback

Pay your respects at the Shrine of Remembrance 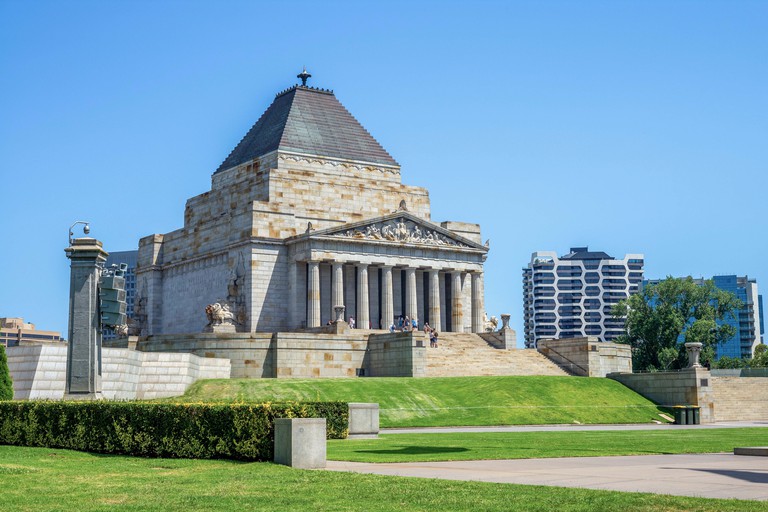 The Shrine of Remembrance in Melbourne opened in 1934 | © Jui-Chi Chan / Alamy Stock Photo
Book Now
Built to honour Victorians who served during World War I, the Shrine of Remembrance now stands as a memorial to all Australians who have served in all wars. Visitors are welcome to explore the memorial at their own pace or join a guided tour. The memorial consists of many rooms and exhibition spaces, which contain over 800 objects, photos and uniforms from the 1850s to the present day.
Open In Google Maps
Melbourne, Victoria, 3001, Australia
+61396618100
Visit Website
Visit Facebook page
Give us feedback

Throughout Melbourne, you’ll find a juxtaposition of modern, Victorian and art deco architecture, with daring designers constantly pushing boundaries and expanding the cityscape. Walking around Melbourne, you need only to look up and gaze at buildings and structures, including Eureka Tower, Federation Square, the Manchester Unity Building and the Melbourne Theatre Company. Fed Square was completed in 2002 and incorporates both a deconstructive design and a modern minimalist style. 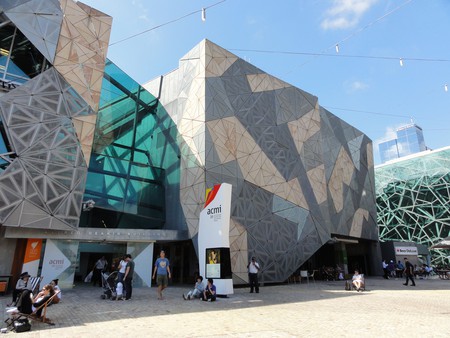 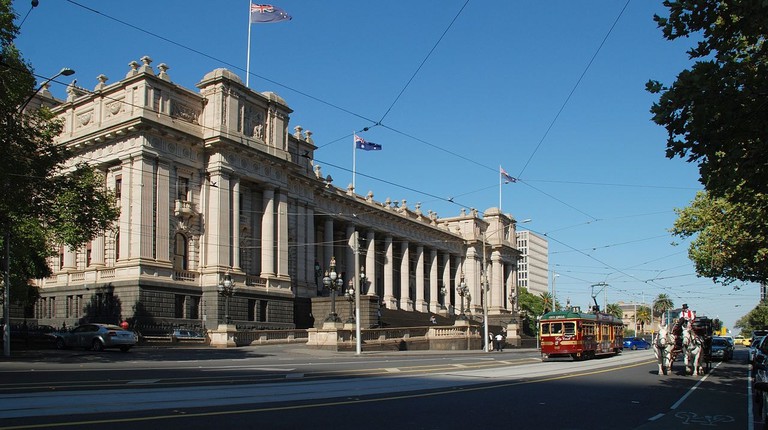 See Victorian decision makers at work at the Parliament House, which is open on both sitting and non-sitting days. The public can also view the Legislative Council and the Legislative Assembly from the public galleries or go along on a free public tour. These are scheduled for when parliament is not sitting.
Open In Google Maps
Spring St, East Melbourne, Victoria, 3002, Australia
+61396518911
Visit Website
Give us feedback

Scout the filming locations of your favourite TV shows

Many of Australia’s most iconic television shows have been filmed in Melbourne, including Neighbours (1985–present), Offspring (2010–present),and Kath & Kim (2002–2007). For Neighbours fans, all outside shots of Ramsay Street are filmed in Pin Oak Court, Vermont South. The non-free option is to do the Official Neighbours Tour, where you get to meet a Neighbours star (past or present). Filming for Kath & Kim took place at 4 Lagoon Place, Patterson Lakes. Offspring fans should visit Brunswick Street to see Dr Noonan’s surgery exterior and Emma Street in Collingwood to see the Proudman home.

Enjoy yourself at a festival 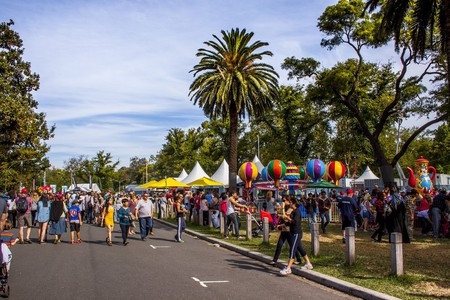