12 Musicians You Didn't Know Were Australian 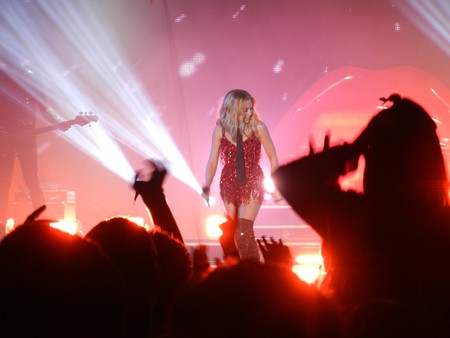 Lest one think that America and Britain are the only Anglo-Saxon countries producing an array of internationally-renowned musicians, Australia is here to prove this misconception wrong. Although long-known for catchy songs by pop stars like Kylie Minogue and her sister Dannii, the country is host an array of musicians who have branched out beyond their Oz-based roots to gain fame on an international level.

Australian singer-songwriter Gabrielle Cilmi was born in Melbourne, Victoria, in 1991, and is most well-known for her songs Sweet About Me (2008) and On A Mission (2010). Although she is primarily Italian with some Arbëreshë heritage, this Australian singer-songwriter moved to London in her teens to pursue her singing career. Having been previously compared to Anastacia and Amy Winehouse, Cilmi was awarded six ARIA Music Awards in 2008, including Single of the Year and Best Female Artist.

Born in Bruges in 1980, Wouter Andre ‘Wally’ De Backer moved to Melbourne at the age of two, and has been producing music since 2001 under the name of Gotye. The Belgian-Australian multi-instrumentalist and singer-songwriter – producing music in the indie rock, indie pop, and alternative genres – gained international success with his song Somebody That I Used To Know (2011), which took the world by storm, quickly followed by hit success Eyes Wide Open (2011) .

Dropping out of school to work with her mum before moving to the U.S. at the age of 16 to pursue her career in hip hop music, Sydney-born Iggy Azalea (1990) has become a well-known Aussie rapper, actress, songwriter, model and director; known for her songs Fancy (2014) and Black Widow (2014). After being recognised for her music videos on YouTube, Azalea became the first female and first non-American rapper to be featured on the Top 10 Freshman List by XXL, receiving many nominations and awards since.

Scottish-born Australian rock singer-songwriter Jimmy Barnes has become one of the most popular and best-selling Australian music artists of all time. Moving to Adelaide at the age of five, Barnes (born James Dixon Swan in Glasgow, 1956), was taught how to sing by elder brother John ‘Swanee’ Swan, before becoming the lead vocalist for Australia’s biggest 1980s-era band, Cold Chisel. Shortly after, Barnes went on to pursue a solo career that allowed him to break into the international market. Well known for songs Working Class Man (1985) and Stone Cold (1993), Barnes performed at the closing ceremony of the Sydney Olympics 2000.

One of Australia’s best known performers, John Farnham has career spans some 45 years. Born in Essex, England in 1949, Farnham moved to Melbourne at the age of 10, becoming a teen pop idol from 1964 to 1979 before taking on a more serious career as a solo artist. With his most iconic song You’re The Voice (1986) peaking at number one in Australia, Germany and Sweden, Farnham has been awarded many honours and awards including Australian of the Year 1987 and 19 ARIA Awards. In 2000, he performed alongside Olivia Newton-John at the opening ceremony for the Sydney Olympics, followed a live performance for the Aussie Olympic team in the lead up to the London Olympics in 2012.

New Zealand born Keith Urban (1967) has been performing at country festivals since the age of 10, continuing after moving to Queensland with his family at the age of 17. By 1990 Urban signed with EMI in Australia, before moving to Nashville, Tennessee two years later where he broadened his career from a country music singer to a songwriter, musician, guitarist, TV show judge and record producer. Well known for his songs Somebody Like You (2002) and the more recent Wasted Time (2016), Urban appeared on The Voice Australia in 2011, American Idol 2012 and 2013 and returned for the farewell finale season in 2016. Today, he has two kids with Australian actress Nicole Kidman.

Australian singer-songwriter, musician and actress Missy Higgins was born in Melbourne in 1983, realising she wanted to become a singer at the age of 12. A couple years later she wrote her song All for Believing as part of a music assignment at school, and in 2001 her sister entered the song on her behalf to the Triple J Unearthed competition for unsigned artists, winning the competition. This quickly launched her career, as Higgins’ song aired in LA and landed her an international recording deal where she went on to release popular songs Where I Stood (2007) and Scar (2004), winning several awards including Best Pop Release for Scar in 2005. Alongside singing, Higgins is known for playing a variety of instruments including the piano, guitar, synthesiser, melodica and xylophone.

Born in Sydney in 1975, Natalie Imbruglia left school at the age of 16 to pursue an acting career, playing Beth Brennan in Australian soap opera Neighbours. After a couple of years, Imbruglia moved to London in 1994, launching her singing career with her hit cover of Ednaswap’s Torn. Becoming her first international single, Torn (1997) sold more than one million copies in the UK alone. The singer-songwriter, model and actress has appeared on both Australian and British version of The X Factor and has been nominated for and won many awards since 1998, being well-known for other hits including Wrong Impression (2001) and Shiver (2005). In 2013, Imbruglia became a naturalised British citizen.

Four-time Grammy award winner Olivia Newton-John was born in Cambridge in 1948, and moved to Melbourne at the age of six. As an English-Australian singer she became a local on Australian radio and TV shows, before moving to Britain to pursue solo work. Despite being homesick for Australia, she represented the UK in Eurovision 1974 before moving to the U.S., where she landed the lead role as Sandy in the movie adaptation of Grease (1978), which went on to become one of the most successful soundtracks in the history of Hollywood. Following this, Newton-John released Physical (1981), which spent 10 weeks atop the Billboard Hot 100, before becoming certified platinum and ranked as the biggest song of the decade. Most well-known for this and Hopelessly Devoted to You (1978), she performed alongside John Farnham in the Opening Ceremony of the 2000 Sydney Olympics, and continues to tour today.

Beginning piano at the age of three, Adelaide-born Orianthi (1985) moved on to acoustic guitar at the age of six, electric guitar at 11, and by 15 she was focused on beginning a professional music career. The Australian singer, songwriter and guitarist relocated to L.A. in 2006 and shortly after appeared as Carrie Underwood’s lead guitarist at the 51st annual Grammy Awards in 2009. In the same year she produced her worldwide hit According To You (2009), peaking in Australia, Japan and the U.S., and became Michael Jackson’s lead guitarist in his This Is It concert series, attending all rehearsals prior to his death. Since then she has released further hits such as Shut Up and Kiss Me (2009), been named one of the 12 Greatest Female Electric Guitarists in 2009 by Elle magazine, won Breakthrough Guitarist of the Year 2010 and was Alice Cooper’s new guitarist for three years.

Currently taking the world by storm is Adelaide-born Sia Furler (1975). This Australian singer-songwriter performs under the single-name moniker of Sia, beginning her music career in the mid-1990s as part of a local acid-jazz band before releasing her debut studio album before the turn of the millennia. Following this, she moved to London, however, dissatisfied with the records released there she relocated to New York City in 2005 where she began touring across the States. It wasn’t until the release of her sixth studio album in 2014, which produced the top 10 single Chandelier, closely followed by Hot 100 number one hit Cheap Thrills (2016) that she saw real success. Singles Chandelier, Elastic Heart and Big Girls Cry featuring Dance Moms star Maddie Ziegler received over 1.7 billion views on youtube combined. With successful collaborations in Titanium with David Guetta and Wild Ones with Flo Rida, Sia has also cowritten many songs for Christina Aguilera, Beyoncé, Kylie Minogue and Rihanna. Today she is commonly seen wearing an over-sized platinum blonde wig to not only control her image but maintain her privacy.

Born in Melbourne in 1987, Australian singer-songwriter Vance Joy is one of Australia’s most recent popular artists, one who not only sings but also plays the guitar and ukulele. Prior to signing and releasing his debut single From Afar in 2013, he was a promising Aussie Rules footy player. However, it was his song Riptide released in the same year that was voted number one on Triple J’s Hottest 100, and became a certified triple-platinum by the Australian Record Industry Association (ARIA). Further being featured in a GoPro TV campaign in the USA, Riptide launched his career headlining a major U.S. tour in 2014, followed by winning Best Male Artist at the 2015 ARIA Music Awards.