11 Reasons Why Christmas In Australia is Better Than Europe 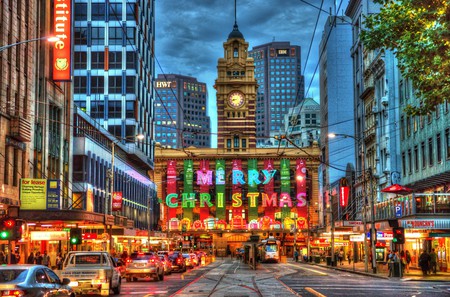 Although Australia is considered an unusual and impressive land down under, never more has that been evident than when comparing Christmas traditions with those from the Northern Hemisphere. With summer in full swing, there are a heap of reasons why Christmas in Australia is better than in Europe; here’s our top 11.

While most in Europe pray for a white Christmas (ie snow fall and sub-zero temperatures), Australian’s sit back and lap up the rays, hoping for sunnier days – which they inevitably get all the way through the New Year. Grab the factor 50, Christmas in Australia may not be chestnuts roasting on an open fire, but it is most certainly roasting hot.

Grab those thongs (in Europe called flip-flops or sandals) and your way to the beach, Christmas lunch is served. Unlike Europe’s traditional roast, many Aussie’s opt for a lunchtime seafood BBQ. In fact, queuing at the local fishmongers on Christmas Eve in preparation for a beach barbecue the following day is a time-old tradition on the continent.

Unlike Europeans, it is standard practice for Australian’s to spend the majority of their Christmas on the sand. As one of the most treasured rituals over the holiday season, the waterside becomes busy with hordes of beach babies tanning up, picnic baskets, volley balls and Frisbees. It may not scream traditional family Christmas but the energy of endless summer vibes is certainly addictive.

The juxtaposition of Santa costumes and surfer dudes may be alien to a lot of us, but in Australia it is gospel; and, it’s a pretty amazing sight. On Christmas day keep an eye out for the Instagram-worthy surfing Santa who always seems to be catching the best waves.

While in Europe the only true glow comes from the crackling fire, while we desperately try to warm our bones, Aussie’s maintain a healthy Christmas glow all season through because of those glorious summer rays. Just don’t forget to stock up on the sun cream; only Santa can get away with rosy red cheeks during the festive season.

Australian’s swear by eating al fresco in the summer (in Europe, winter) months. As the sound of outdoor dinner parties waft through the streets, it’s easy to tell: Christmas is near in Australia. It may not be a ‘traditional’ Christmas dinner party, but with palm trees blowing and a summer cocktail in hand, it’ll be hard to complain.

Just like in Europe, the act of dressing the house is just as important as dressing the Christmas tree. Yet in Australia, the popular choice is the native ‘Christmas bush’ (formally called Ceratopetalum gummiferum). This cream-coloured flowering plant symbolises that Christmas day is near; the colour of the leaf will gradually deepen to a rich red hue, which generally happens over the days of Christmas, marking the joyous occasion.

The first major event is the annual Rolex Sydney to Hobart Yacht Race, hosted by the Cruising Yacht Club of Australia. As one of the country’s most anticipated sporting events of the year, this race always results in a fine Christmas Day party.

Boxing Day also marks the opening of the ‘Boxing Day Test’ between the Australian Cricket Team and an international touring side at the Melbourne Cricket Ground. As Australia’s second most played sport, this gains major attention, followed by a major party.

Boxing Day Test at the MCG ticked off the bucket list! #boxingdaytest2016

Contrary to popular belief, Australia is not devoid of classic Christmastime traditions. Carols by Candlelight is one of Australia’s favourite holiday passtimes; originating in the 19th century, this custom encourages participators to steal a moment from the hustle and bustle of Christmas carousing and gather (usually al fresco, given the excessive warmth) to join in song.

Whereas most European’s are bundled up indoors on Christmas Day trying to stay warm, Aussie’s are outside playing games in the sun. Whether it is pre- or post-Christmas lunch, one of the Australian’s favourite past times on Christmas Day is to pull out the cricket gear and enjoy a good match. It may not exactly seem traditional compared to those who make snowmen or snuggle up by the fireside, but as they say in Australia: you do you (as in, we all have our own ways of doing things!)

With summer in full throttle, the Christmas season, sees some of the finest music festivals come to life all over Australia. Top festivals to add to the must-hit list include Subsonic Music Festival, Falls Festival, Lost Paradise, Woodford Folk Festival and Field Day.