11 Retro TV Shows Only An Australian Would Know 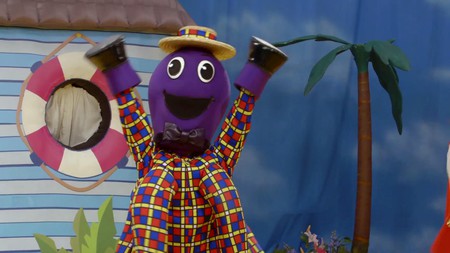 Australia has some truly memorable TV shows including the classic rivalry in viewers between Neighbours and Home and Away; however, it is these shows that are bound to trigger a sense of nostalgia.

The Adventures of Blinky Bill

‘Hey, hey, Blinky Bill, you’ll never catch him standing still. Life is pretty boring till, you’ve met Blinky Bill’. There’s nothing more Aussie than watching everyone’s favourite koala get up to mischief in this animated TV series. Based on Dorothy Wall’s books about Blinky Bill, and set in the fictional Australian town of Greenpatch, Blinky heads out on many adventures with Flap the platypus, Splodge the kangaroo, Nutsy his adopted koala sister, and many other Australian animals also make their debut. Starting in 1993, this catchy theme song is close to all hearts – and we can’t help but sing along, no matter our age.

It’s simple: in Bananas in Pyjamas (1992-2001), the stars are two anthropomorphic bananas – named B1 and B2 – in pyjamas. Inspired by one of Carey Blyton’s songs written in 1967, describing ‘bananas in pyjamas chasing teddy bears’, and first seen on the Australian version of Play School, the adventures of these bananas captured our hearts and had us all singing along to their catchy, rhyming theme song. But the question is, ‘Are you thinking what I’m thinking, B1?’

The television show Fat Cat and Friends (1972-1992) starred a well-loved, anthropomorphic cat named Fat Cat, similarly to Humphrey B Bear. Although his television show didn’t make it through to the new millennium, he has long been the iconic mascot for Seven Perth’s successful fundraising organisation, Telethon. However, the nostalgia really kicks in when we had to go to bed when Fat Cat went to bed, saying goodnight to all the boys and girls every night at 7.30PM. Now, off to bed we go!

First airing in 1965, one of the most successful programs for Australian pre-schoolers introduced the iconic tall, shaggy brown bear to our screens. Originally named Bear Bear, an on-air competition renamed him to Humphrey B Bear as he is still known today. With his helpful companion narrating his adventures through the ‘magic forest’, the mute bear has entertained and educated audiences for years. Although the final episode aired in 2008, he continues to make an appearance on our screens, having celebrated his 50th anniversary in 2015; after all, ‘he’s the very best friend you’ll ever meet’.

The adventures of the courageous pink elephant Johnson, and all his friends, made it to our screens and hearts from 1990 to 1995. Johnson and Friends are a bunch of toys (featuring a dinosaur, shy robot, dump truck, leaky hot water bottle and a concertina) who live in a young boy’s, by the name of Michael, bedroom. Playing upon children’s – aimed at kids under five – fascination and belief that their toys come to life when they are asleep, or leave their bedroom, we follow the adventures of these toys whilst checking that our own haven’t run amuck.

L’il Elvis Jones and the Truckstoppers

The French-Australian animated series from the 90s toys on our love for Elvis Presley, hinting that the star of this show, L’il Elvis, is the illegitimate child of the King himself. Airing from 1993-98, this child was raised by foster parents and forms a band, known as the Truckstoppers, with his friends Lionel and Janet. The Indigenous Australian Lionel and the Asian-Australian Janet journey with L’il Elvis on their adventures throughout the outback town of Little Memphis/Wanapoo.

Explore the enchanting world of Magic Mountain, the live-action, full body puppet series is an educational program appealing to children up to the age of ten. Running from 1997-98, we followed the unusual games the dragon, panda, tortoise and lion created, the tricks they would play on each other and their exciting adventures. Although we guarantee you are questioning the title of this show, once you listen to the theme song, you will be reunited with the magic of this mountain once again.

Encouraging children of all ages to send in their ‘squiggles’ for the iconic puppet Mr Squiggle to turn it into a recognisable drawing with his pencil nose. Often requiring the images to be turned right-side-up to reveal the artwork, Mr Squiggle entertained children to think outside their squiggle in one of the longest-running kids’ programs in Australia (1959-99). What squiggle are you going to turn into a masterpiece next?

‘Have you ever… ever felt like this?’ The strange things that happened in Round the Twist were a variety of bizarre magical adventures that have surely embedded their way into your memory. This fantasy show based on the stories by Paul Jennings and his other works followed three kids and their father who live in a lighthouse, pushing boundaries into acceptable children’s television. With episodes featuring references to things such as vomiting, nudity, homosexuality and birth – one even involved a male giving birth that we all vividly remember – it’s a strange show with strange occurrences that are still firmly stuck in our strange memory.

The importance of friendship and teamwork were the centrepiece of all young Aussie girls’ favourite TV show, Saddle Club (2001-03). The Australia/Canada co-production based the show on the books by Bonnie Bryant that followed the lives of three teenage girls in their trainings for equestrian competitions, and their rivals with other riders, in the fictional Pine Hollow. We guarantee you once wished you could make your way to Pine Hollow and be a part of their horsey-club!

Toot, toot, the iconic Big Red Car is making its way back into your heart. Well, let’s face it, it never left. The top-earning Australian entertainers, kids music group known as The Wiggles originally formed in 1991 with members Anthony Field, Murray Cook, Greg Page and Jeff Fatt. With supporting performances by Dorothy the Dinosaur, Wags the Dog, Henry the Octopus, and the friendly pirate Captain Feathersword, the music group originally financed their own TV show before making it big as entertainers with their funded films and TV shows. Although they have more recently recast due to the retirement of Cook, Page and Fatt, all who grew up with this talented group can surely agree that there will be no one quite like the original. After all, how can they sing Wake Up Jeff without Jeff?