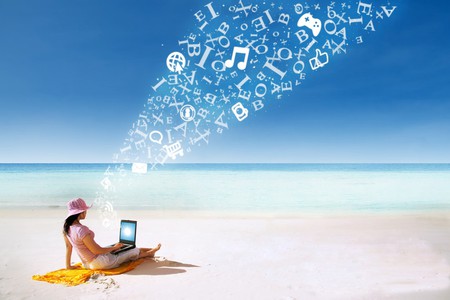 With the new age of social media, half the travel inspiration we get is from the little gem we call Instagram. Without the alluring visions of clear blue oceans, lush green forests and twinkling city lights constantly popping up on our feeds, we might not have the motivation to save those pennies for a plane ticket. However, when it comes to Australia‘s top Instagrammers, be prepared to be inspired by salty hair, interior designs, beautiful landscapes and bodacious beach babes.

Famously, Australia’s most charismatic and beloved duo, the names Hamish Blake and Zoe Foster go hand in hand. The pair have strong Instagram game, but there’s no doubt Zoe’s down-to-earth photos and witty captions make her the clear winner. Despite being a former beauty editor, an author, a business-owner, a mother to two insanely adorable children and seemingly having it all, her feed is a very honest (and witty) reality check on herself.

A perfect mix of style, substance and exotic travel locations, Aubrey Daquing started The Love Assembly to inspire girls from around the world to live a more creative and inquisitive life. Born and raised in Australia, Aubrey’s Instagram page has a pastel-bright lookbook theme and has the power to make you feel sunny on a gloomy day.

In 2012, Natasha and her business partner founded a blog that shared a new photo of a bikini a day, appropriately named ‘Bikini A Day’. When they received hoards of followers, they launched a swimwear line called Monday. Her Instagram features sunny beaches, broad smiles and of course killer swimwear.

Rebel Wilson’s Instagram is the number one indicator that this woman is who you want as your next best friend. She’s a fun-loving, mile-a-minute gal, with her Instagram snaps featuring Australia, Hollywood or her brother’s tennis court, depending on the day. She loves her work, she’s hilarious and her ‘gram features all her upcoming projects – so if you loved her in Pitch Perfect, start following!

Norris describes himself as a ‘visual storyteller’, and his Instagram is evidence to that statement. His photography skills are out of this world, and the photos he takes – mainly nature-centric – are ethereal. Originally from the Gold Coast in Queensland, he began his photography career by shooting the beaches at dawn, so any of his photos featuring water often take front and centre. Expanding out of Australia and into South-East Asia, his photos keep the same surreal vividness but take on an entirely new and rugged terrain.

Lauren is the type of Instagrammer you really get to know because she doesn’t just caption her snaps with arty keywords (like ‘summer’), she really shares with you her adventures around the globe, especially in Asia and Australia. She’s a huge wildlife lover, so expect plenty of photos of all kinds of animals, from dogs to orangutans. One of the most seasoned social media queens, Lauren is known as ‘Australia’s first Instagrammer’. While she may be the oldest, her skill hasn’t diminished over the years, and her posts are still entertaining as ever.

Looking for inner peace? A how-to guide for mediation? Yoga moves that will make you as flexible as a rubber band in no time? Look no further than Sjana Earp, a yoga teacher, traveller and sun chaser.
The Aussie beauty is an open and honest ‘grammer, who believes in connecting to her followers through strong visual imagery and her openness to sharing her posting tips to budding Instagrammers. She films her own ‘shoots’, taking an iPad and a few changes of clothes down to the beach. She regularly posts and speaks openly about how social media can positively influence mental health.

Australian’s own Kim Kardashian, Hembrow constantly posts curve-loving, esteem-boosting selfies designed to make any woman feel great and any man look twice. The Gold Coast mother of two is a fitness guru and mummy-blogger. She often mixes the two, posting down-to-earth tips on how mothers can squeeze in a workout in between nap time and feeding time. She recently launched a luxe sportware range called Saski, modelling the entire range herself.

Throwing an up-and-coming fashion icon into the mix, Nicole Wern posts the kind of chic life you imagine for yourself when you’re wearing tracksuit pants and haven’t washed your hair in awhile. Her feed shows her loyalty to Australian designers, and her posts are a great way to learn the names and styles of some of Australia’s best. Capturing beauty in the simple and serene, she encourages all women to feel beautiful in their own skin. Thanks, Nicole!

A refreshing take on Aussie scenery, Patino focuses his work on one area – Wollongong. Know it? Don’t worry if you don’t. Follow him on Instagram, and soon you’ll have added a new destination to your itinerary. The beautiful south coast of Sydney is vastly underrated, and Patino depicts a surreal landscape you don’t want to miss when you’re travelling Australia.

Liss leads the life we all dream of, chasing the sun around Australia, lying on the beach and tasting the best desserts the country has to offer. The confessed chocolate lover shares the adventures of her eternal road trip from her tiny caravan. Her photos of the great Australian outdoors are colourful and nature-based. Liss will inspire you to travel to the most remote corners of Australia, for experiences and views you’ll never forget.