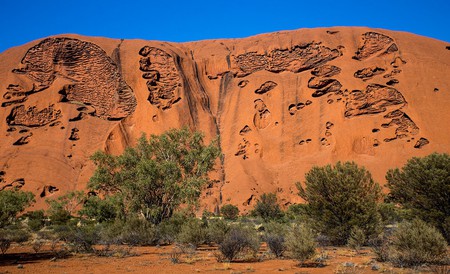 With stunning natural wonders aplenty in Australia, it can be hard to know which scenic sights to prioritise; from majestic waterfalls and prehistoric rock formations, to UNESCO world heritage sites and most-advanced ecosystems, these top 10 stunning Australian natural landmarks should not be missed when visiting the continent.

Situated just off the Great Ocean Road in Victoria lies the 12 Apostles, a series of limestone stacks formed over centuries of rock erosion. Although there are only nine left standing, the name lives on. These impressive formations, some reaching 50 meters in height, bring an added layer of drama to this already stunning rugged coastline.

This postcard icon is located in the Northern Territory, within the parameters of Uluru-Kata Tjuta National Park. Also known as Ayers Rock, Uluru is recognized as a UNESCO World Heritage Site. The impressive sandstone formation bears great cultural significance as a sacred site to the Anangu (members of multiple indigenous tribes whom claim rightful ownership of the land of Uluru). Go at dusk for the most Instagram-worthy shots.

As one of the seven natural wonders of the world, the Great Barrier Reef is arguably Australia’s most impressive natural achievement. Also listed as a UNESCO World Heritage Site, it is the world’s largest reef, stretching more than 2,000 kilometers along the coast of Queensland and including more than 900 islands and 2,900 reef systems, not to mention a kaleidoscope of technicolor marine life such as fish, dolphins and giant turtles.

That moment when you feel like being part of a huge #aquarium! 🐡🐟🐠 I am so glad of having experienced what #nature is able to create.. 🕺🏼🙆🏼‍♂️ #scuba #diving #diver #sealife #fish #reef #corals #anemones #underwaterworld #greatbarrierreef #pacificocean #australia #downunder #prodive #cairns #gopro #underwaterphotography #travel #travelgram #wanderlust #huebidiscoversdownunder

The Bungle Bungles is the most popular attraction in the World Heritage-listed Purnululu National Park, situated in Western Australia, not to mention one of the most impressive natural wonders in Australia. Over 350 million years old, these unique dome-shaped rock formations boast majestic colours of red and black and tower over 250 meters in height making this indigenous sacred site a must-see in Australia. Note: Purnululu National Park is open from April until November (weather permitting).

Boasting some the most spectacular examples of tropical islands on the continent, the Whitsundays comprises of 74 islands off the coast of Queensland, Australia. Mostly uninhabited they encompass an unspoiled vision of nature at its fullest, although four islands (Daydream Island, Hamilton Island, Hayman Island and Long Island) have adapted to accommodate visitors. With the Great Barrier Reef on its doorstep, these island paradises boast white sandy beaches, endless activities and tropical vibes aplenty.

Some places doesn't need a caption. They are simply captivating in themselves 😍

Another UNESCO World Heritage Site, Shark Bay offers over 2.2million hectares of natural wonder to revel in. Set in Australia’s most westerly point, Shark Bay earned its title of one of Australia’s most stunning natural landmarks for its waters (housing one of the most diverse seagrass beds on the planet), and its islands, bays and peninsulas; it has stunning rock formations across its natural park too and a marine world rich in diversity. The area is also a sacred ground to the indigenous people expanding its appeal to cultural significance.

Located in Grampians National Park in Victoria are MacKenzie Falls, a stunning natural landmark in Australia. There are a number of hikes visitors can take in order to reach the base of this impressive waterfall, which boasts a powerful rush of water over rocks, plunging into a plunge pool at its base, raising rainbows in its honour. The falls, which are about 30-35 meters in height are wheelchair accessible with a viewing platform just one km along a scenic path. Note: swimming is not permitted at the base of MacKenzie Falls.

Set in the surroundings of Nambung National Park in Western Australia these limestone rock formations, suitably named The Pinnacles, are rightfully considered one of Australia’s most stunning natural landmarks. Although geologists still debate the exact method of emergence for these unique marine-based formations, it is said they date back millions of years to when the park would have been submerged under water.

Along the coast of Queensland, Australia stands Daintree Rainforest, a 1,200 kilometre stretch of rainforest (and the largest mass of its kind on the continent). This tropical ecosystem is one of the most oldest and complex on the planet, boasting species that date back 110 million years and some of the most rare botanicals in the world. Visitors are invited to explore the rainforest via a series of guided tours and excursions that promote education and ecotourism.

Spanning 627,422 hectares, Karijini National Park is Western Australia’s second largest parkland. With rocks dating over 2,500 million years, this impressive landscape offers adventurers stunning scenery, waterfalls, trails and hikes for all levels of explorer, swimming spots and gorges. Focus on the northern half of the park as much of the south is inaccessible, and try visit in autumn, winter or early spring to catch the most comfortable weather.