A Century Of Melbourne In Ten Films 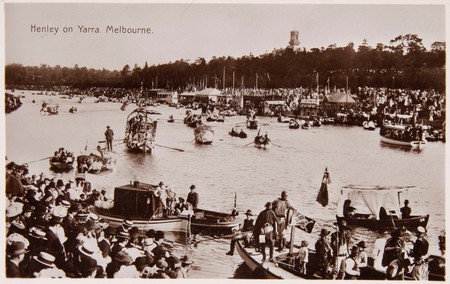 Whether they’re fictional or based on true stories, the movies of Melbourne tell a unique tale of crime, extravagance, and excess, mixed with an equal amount of mundanity and simplicity. Let’s look at how Melbourne’s films have captured each decade of its modern history.

Loosely based on the criminal activities of Joseph ‘Squizzy’ Taylor (David Atkins), this 1982 film transports you back to a Melbourne where crime ran rampant, criminals were idolised, and poverty was widespread. It is especially interesting to see Flinders Street, now an intersection filled with modern Mercedes and Porsches, scattered with old cars and trams. Beyond the supporting performances of Jacki Weaver and Steve Bisley, the film is a fascinating look at how far Melbourne has come, from debauchery to sophistication.

A consistent part of Melbourne’s culture has always been its horse racing. An integral part of our sporting history was the illustrious career of Phar Lap, the horse which gave people hope during the Great Depression of the 1920s and ’30s. Made in 1977, the film follows the rise and fall of the Thoroughbred, the attempts on his life, and his multiple winnings. However, most of all, it depicts the earlier times of Melbourne’s passion for horse racing, complete with top hats, binoculars, and glamourous clothing.

While this is more of an American biopic of a WWII soldier found to be responsible for the deaths of three women in Melbourne, it still captures the tensions from both countries halfway through the war during 1942. Featuring American actor Reb Brown as US soldier Eddie Leonski, the film presents a dark part of Melbourne’s history as tempers flare between the Australian and American military forces.

A look into the beginnings of the city’s multiculturalism, and also our love for coffee, is told in this story of Italian love during the 1950s. An ex-patriate waiter, Angelo (Giovanni Ribisi), is desperately looking for a love in Italy but continues to be rejected. In a last-ditch attempt, he sends a photograph of his more handsome brother, Gino (Adam Garcia), to Rosetta (Amelia Warner). What follows is confusion about who is who and where love truly lies.

While culture often glorifies crime or violence, Spotswood (a.k.a. The Efficiency Expert) focuses in on the work of the little guys. Taking place in a moccasin factory in Melbourne’s south-west, Errol Wallace (Anthony Hopkins) is sent to improve efficiency during 1966. Keep an eye out for the best slot car race put to film and early performances from Toni Collette, Ben Mendelsohn and Russell Crowe.

While its story spans several decades, one half of the clay-created story of Mary and Max begins in the south-eastern town of Glen Waverley during 1976. Mary (Toni Collette) is an introverted girl who chooses one day to start sending letters to a random man, Max (Phillip Seymour Hoffman), in New York. What follows is a touching tale of helping others to find their feet in an ever-changing world.

Mark ‘Chopper’ Read (Eric Bana) just calls himself a normal bloke who likes a bit of torture. In this 2000 film, viewers get a close and brutal look at Melbourne’s criminal underbelly and the madness it creates, as it follows the career criminal’s latter escapades. Topped off with a classic ’80’s soundtrack, this is the film that sums up the freedom and upheaval of the ’80s.

The quintessential Melburnian film and comedy cult classic represents the fair-go Aussie nature and the value placed on the little things. The 1997 film tells the story of Darryl Kerrigan’s (Michael Caton) plight to save his modest house from being bought out by the government. What follows is a collection of classic Australian sayings: ‘Tell him he’s dreaming’, ‘going straight to the pool room’, et cetera.

An essential part of Melbourne’s culture is the work and accomplishments of the ‘little man’. The 2006 film Kenny shows this work in all of its less-than-glamourous glory. Kenny Smyth (Shane Jacobson) is a plumber of toilets provided for large events, like the Melbourne Cup and Calder Raceway drag races. Presented as a mockumentary, it provides viewers an opportunity to laugh at themselves when they may be at their most vulnerable.

Finally, here is the modern Melbourne everyone loves. Ben (Josh Lawson) is a man moving throughout life without direction. He seems to have it all. However, he moves from job to job, girlfriend to girlfriend, in search of satisfaction. Also, there are plenty of small performances from great Australian comedians and actors, such as Felicity Ward, Ed Kavalee, and Rachael Taylor.