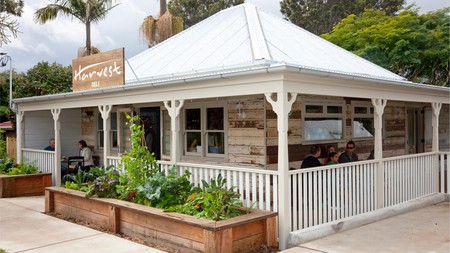 Byron Bay is a quintessentially Australian coastal town and one of the country’s most popular destinations for a beachside break. It’s also home to an exciting dining scene that attracts foodies and gastronomic tourists from around the world – as well as Michelin-star French chef, Bruno Loubet. Culture Trip takes a look at his pick of the best restaurants in and around Byron Bay.

Bruno Loubet is renowned for his simple, sustainable approach to dining – one that found its ultimate expression at his pioneering vegetable-focussed London restaurant, Grain Store. “People like to go out more often and spend less money than in the past. It doesn’t need to be all foie gras and truffles,” he said at the time of opening. “You can serve excellent food, even if it’s simple, by focussing on the key ingredients and taking out the expensive trimmings.” So, it’s no surprise that one of the Michelin-star chef’s favourite dining destinations is the laid-back beachside town of Byron Bay.

Bruno and his wife, Catherine, first discovered Byron Bay when living in Australia in the early 2000s, before moving to London. After nearly a decade in the UK, they decided to return to Australia, which they consider their adopted homeland. “I always wanted to come back to Australia and live a sustainable, organic life in the country,” says Bruno. “We kept our home here and wanted to open a small cooking school on a hobby farm.” 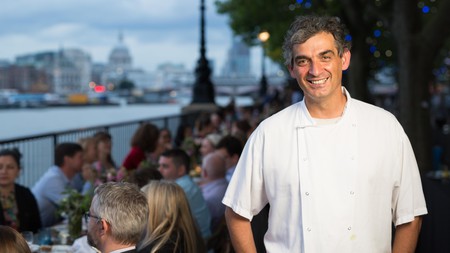 Set on an idyllic farm in the Gold Coast hinterland and located in the 130-year-old traditional Queenslander that the couple call home, Willow Vale Cooking School has brought the Loubets dream to life. From the cooking school, Bruno leads workshops that encourage sustainable eating and make use of the organic produce grown on the farm – from a class exploring his mother’s favourite recipes to one that details how to put together the perfect picnic.

While the Loubets are based on the Gold Coast, they often make the 90-minute trip to Byron Bay. Not only is the town home to some of their favourite restaurants, it also boasts their favourite beach, the picturesque Wategos Beach.

Want to enjoy a bite to eat in this vibrant beachside town? These are some of Bruno Loubet’s favourite restaurants in and around Byron Bay.

Since launching in Sydney a decade ago, Three Blue Ducks has expanded to five locations across Australia. Each one has a focus on organic, sustainable and locally sourced produce, and many of the ingredients on the menu at Byron Bay come directly from the restaurant’s farm. “Three Blue Ducks at the Farm is great for lunch,” says Bruno. “It also has an excellent cafe and a produce store. I’d say it’s the Australian version of London’s famous Petersham Nursery on a larger scale.” Alongside dishes such as miso-glazed eggplant with whipped tofu, szechuan, ginger, coriander, peanuts and pickled chilli, there is a rotating selection of Australian craft beers, wines and ciders on tap. It also offers picnic hampers packed full of local goodies to enjoy in the stunning 32ha (80-acre) grounds, which boast views over the hinterland and Byron Bay’s famous lighthouse.

“Harvest is situated in a beautiful historical village, and has a restaurant, a deli and a bakery with a 118-year-old oven,” says Bruno. “We absolutely love it here! The chef, Alastair Waddell, is from Scotland, but he cooks a lot with native Australian ingredients. Harvest has its own farm and an in-house forager, Peter Hardwick.” Even the cocktails are inspired by native flora and are adorned with pretty foraged garnishes from the surrounding bushland. Every Wednesday, Alastair and Peter host Wild Harvest Sessions, during which they present new menu ideas created with foraged ingredients for feedback, with the winning dish making it on the seasonal menu. There’s also a monthly dinner event that sees top chefs from across the country exploring under-appreciated native ingredients.

Located in the industrial-chic Habitat community development in Byron Bay’s North Beach, Barrio is an Argentinian restaurant that champions good food designed to be shared with family and friends. “The menu is based around the wood-fired oven and the charcoal grill,” says Bruno. “It’s all about the exceptional products.” Think house-made kingfish pastrami with charred onion tartar, or fish smoked on the bone with tomatoes and tamarind. There’s also coffee from Melbourne-based St Ali, baked goods from the Bread Social, and an ever-changing selection of hearty salads and specials for takeaway. After lunch, explore the rest of the industrial estate; there are seriously tasty smoothies at Vagabond and beautifully curated local fashion and sustainable homewares at Habitat Collective.

Ben Devlin is a long-standing fixture in Byron Bay’s dining scene. The talented chef grew up in Byron and has been at the helm of several critically acclaimed restaurants, including Paper Daisy in Cabarita. Pipit is his first time running his own restaurant, with his wife Yen Trinh, and is well worth the 35-minute trip from Byron Bay to Pottsville in the Northern Rivers region. “Pipit is a celebration of the Northern Rivers’ coastal lifestyle,” says Bruno. “Ben Devlin’s menu celebrates great produce and wood-fired cooking.” The signature set menu is the best way to experience Ben’s approach, with dishes such as dry-aged swordfish jerky with avocado and kimchi, and baby Queensland grouper with grilled greens and lobster sauce. It also features an exciting array of wild edibles gathered from the nearby coastline.

Raes on Wategos is a Byron Bay institution – a dreamy, white 1960s villa perched on the edge of the idyllic Wategos Beach. With Instagrammable vistas at every turn and an interior lifted straight from the pages of a design magazine, it’s no surprise that the luxury boutique hotel is popular with local and international celebrities. It’s not just about looks, though; its restaurant, Raes Dining Room, led by chef Jason Saxby, is a celebration of contemporary Australian ingredients given a Mediterranean twist. Think squid ink lasagna with spanner crab, bush tomato, chilli XO, fennel cream and bisque, or market fish with bonito butter pipis, green olive and coastal greens. “This native Australian restaurant serves excellent seafood and overlooks our favourite beach in the world,” says Bruno. Just make sure you book well in advance – it’s often booked out for lunch and dinner for the entire summer.

This cute bakery set in a traditional Queenslander cottage is one of Bruno’s firm favourites, and while it’s not in Byron Bay, the 80-minute drive is well worth the trip. “It’s a brilliant place for breakfast or lunch sitting under the trees on the gorgeous terrace,” he says. “The bread is amazing.” At the heart of the bakery is a wood-fired oven made with antique red bricks collected from around the country and doors salvaged from the first bakery in Tasmania. Try the wood-fired sourdough with smashed avocado, or a BLT. There’s also a tempting selection of semi-sourdough doughnuts. After breakfast or lunch, make a day of it and explore Burleigh Heads. Burleigh Head National Park offers spectacular views and hiking, or check out the local Village Markets on Sundays.

Although not in Byron Bay, Bruno couldn’t leave his favourite local pub off this list. “For fun and when we’re really missing the UK, we go to the Fox and Hounds Country Inn in Wongawallan,” he says. “It’s a traditional English pub serving all the classic British pub dishes alongside British beers and ales.” Located about 90 minutes from Byron Bay or 45 minutes from Brisbane, at the base of the beautiful Tamborine Mountain, the Fox and Hounds boasts features that date back to the 1700s – before European settlement in Australia. “Most of the interior was actually shipped from the Sussex Arms pub in Tunbridge Wells and rebuilt here,” he says. It doesn’t get more authentic than that.

This is an updated version of a story originally created by Hayley Simpson.