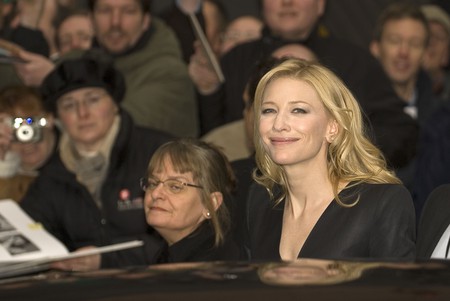 Cate Blanchett is arguably Australia’s most successful and respected actress. With two Oscar wins under her belt and a seventh nomination for her performance in Carol this year, Blanchett is as popular as ever, and is a performer adored by critics and the public in equal measure.

Just a glance at her list of credits proves that having her name attached to a movie is guarantee of quality. If you’re looking to check out her back catalogue – and why wouldn’t you? – you can’t go wrong with any of these. Each performance is meticulously crafted and compelling in their own right, but when considered together as a body of work, the movies demonstrate the chameleonic abilities of an actress at the top of her craft.

Babel is an ensemble piece in which Blanchett only appears on screen for a fraction of the time, compared to her much larger parts in other films, yet her impression is a lasting one. She plays one half of a couple on vacation in the Moroccan desert to try to fix their marital problems when she falls victim to a freak accident. The physical and emotional performance by Blanchett and Brad Pitt – who plays her husband – are stand outs in a generally well acted and affecting film about how human beings are all connected.

The Curious Case of Benjamin Button (2008)

Blanchett plays Daisy, the love interest of the title character, through almost an entire lifespan and somehow manages to be convincing at every single age. Although the title would imply the story is about Benjamin, it’s very much about Daisy as well, and Blanchett excels at demonstrating the tragedy of a life spent loving someone whom she cannot be with. Her accent is also so spot on it’s easy to forget she isn’t from the American deep South.

I’m Not There is a very unconventional affair, in that six different actors embody Bob Dylan at different stages of his life and career. Cate Blanchett is one of these actors, and her version of Dylan is Jude Quinn, a folk singer who is accused of selling out by performing with electric guitars at a music festival. While her character’s silhouette became the iconic image used on the film’s promotional materials, Blanchett gained a lot of media attention (and awards season hype) for the fact that she was playing a male character in I’m Not There, so much so it threatened to overshadow the film itself. At the same time, the attention was well-deserved — not for the fact that she played the role of a man, but for the fact her performance made the audience forget that entirely.

As Sheba Hart, the schoolteacher who conducts an illicit affair with a student and is subsequently blackmailed by her obsessive neighbor, Blanchett treads a difficult line. We fluctuate between liking and disliking Sheba, move between feeling sorry for her, and are sometimes horrified by her actions. Thanks to a similarly terrific performance from Judi Dench, the movie builds and builds like a vicious fire as the women circle, twisting and turning on each other until they reach a breaking point.

Blanchett followed her first Oscar win with a return to Australian cinema. While Little Fish may be less well-known to European and American audiences than the rest of her body of work, it arguably features one of her finest performances, as a recovering heroin addict trying to get her life back on track when she gets caught up in a major drug deal. It’s a performance full of grit and realism, which makes the subject matter all the more disturbing.

In her latest awards-worthy performance, Blanchett plays the title character who, while in the midst of divorcing her overbearing husband, falls in love with a younger woman who works at a department store. She is wonderfully matched by Rooney Mara in a movie that is beautiful in every sense — the setting of 1950s New York, the cinematography and the performances by the two leads combine to create an affecting and evocative drama. Blanchett’s portrayal of Carol is layered and complex. While she initially appears cool and collected, she slowly peels back the layers on her characters as the movie progresses, revealing a difficult and emotional internal struggle between her real self and how she appears in society.

The fact that her role as Meredith Logue is a pretty minor one that still merits a spot on this list is a testament to how much of an impression Blanchett is able to make with very little screen time. She plays an American heiress duped by Ripley into believing he is a man of her own social standing, and she simultaneously naive, calculating, innocent and insincere. It is worth noting that the director of the movie, the late great Anthony Minghella, actually expanded the part for Blanchett, whom he recognized as an “astonishing” actress.

When it comes to taking on iconic historical figures, there aren’t many tougher ones to portray than The Virgin Queen. Whilst there have been many depictions of Elizabeth I over the years on screens both big and small, Blanchett’s depiction (as seen in Elizabeth and the excellent follow-up Elizabeth: The Golden Age) stands among the best. Blanchett excels at demonstrating Elizabeth’s public strength as a leader of men while also showing us the personal fragility beneath that exterior.

Blanchett’s performance as Katharine Hepburn in The Aviator gained her an Oscar. Playing any real life person can be daunting, especially someone so well-known and unique, yet Blanchett managed to give both a believable rendition of Hepburn’s persona while putting her own spin on it, taking the performance beyond a mere impersonation and depiction of the eccentricities of the famous actress.

It quickly became clear after Blue Jasmine’s first screenings that nobody was going to deny Blanchett her second Oscar. Woody Allen’s movie is loosely based on the Tennessee Williams play A Streetcar Named Desire, which Blanchett also performed in onstage in Sydney prior to making the film, so it’s not hard to see why she was cast. Her performance as Jasmine, a woman in the middle of a nervous breakdown, is an acting masterclass. What starts as a subtle under-the-surface kind of tension slowly bubbles up to a steady unravelling into pure madness, and the performance is also very physical. The way that Blanchett uses her body to depict Jasmine losing her grip on reality through twitches, darting eyes and tremors is astonishing to watch, making this performance one of the most deserving Oscar wins of recent years.