The Pacific Islands are one of the most remote locations on Earth and often overlooked on the international art stage. With a long history of colonization by European countries, the islands have a rich cultural and historical heritage that draws from both its own traditions as well as those of its colonial past. We take a look at the top 10 contemporary artists whose practices are inspired by their history and culture.

Sofia Tekela-Smith (b. 1970), is of mixed Scottish and Rotuman origins, and spent her childhood on the island of Rotuma—Fiji—before settling in New Zealand. Her art is influenced by her Polynesian heritage and the traditions of body adornment. Tekela-Smith has extended the boundaries of conceptualization, presentation, and display of her work —jewellery and objects of body adornment — to become ‘art’ rather than ‘craft’. Melodies of their Honey Coloured Skin (2003) is a series of black, relief fibreglass silhouettes of heads, each decorated with a piece of Tekela-Smith’s jewellery.

Inspired by kitsch objects depicting Polynesian, African and Aboriginal heads, popular as domestic decor in the 1950s and 1960s, the silhouettes challenge the stereotyped images of Polynesians perpetuated by tourist strategies of the colonial past. The photographs in Brown Eyes Blue (2004) also subvert the stereotypical perception of Polynesian women in the collective imaginary. Posing challengingly against a black background, hands, arms and lips painted red— the colour of passion, danger, violence, blood, sacredness—with a red hibiscus flower in the hair, they wear a large mother of pearl neckpiece over their naked torso. 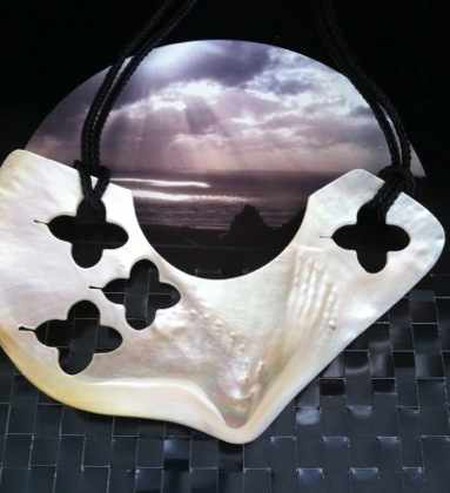 Michel Rangie (b. 1950) draws inspiration from his cultural heritage and the spiritual and social traditions of his place of origins, the Vanuatu Island of Ambrym. The geographically isolated northern part of the island still widely retains tribal customs and kastom—customary government, law, and religion. A variety of artefacts are created to accompany rituals and ceremonies, to mark commemorations and a diversity of events. Rangie’s oeuvre is directly influenced by these traditional crafts, as visible in Mague ne sagran (ranking black palm) grade 4 (c. 2005), one of a series of works inspired by mague—figurative sculptures created for male initiation ceremonies. Ambrymese society is structured around chiefs who rise through a series of grades, and rises in rank are marked with ceremonies and the creation of mague. Made of carved black palm and painted with synthetic colours, the totemic figures each have its uniqueness, according to the social grade of the chief to which it is dedicated.

Niuean artist, novelist and poet John Pule (b. 1962) works with painting, drawing, printmaking, filmmaking and performance. His oeuvre draws inspiration from Niuean cosmology and Christianity, and tackles issues of migration and colonialism. Tukulagi tukumuitea (Forever and ever) (2005) entwines his personal narratives with all the aforementioned topics. Pule juxtaposes imagery of Christ removed from the cross with grieving people in a desolate landscape. Androgynous figures carry large birds, objects and humans up and down ladders, evoking the movement of cultures and belief systems. The peonies on the painting reference the missionaries’ imports, including the flowers themselves, which have become part of the local flora. Dominated by the red colour — blood and violence — the work also suggests the possibility of renewal. Pule’s work is directly influenced by his interest in the tradition of hiapo — a freehand barkcloth tradition from Niue. Dating back to the mid-19th century, hiapo mixes Western and Niuean cultures, with a fusion of decoration and imagery as diverse as Western, traditional, language, numerology, marine and botanical. 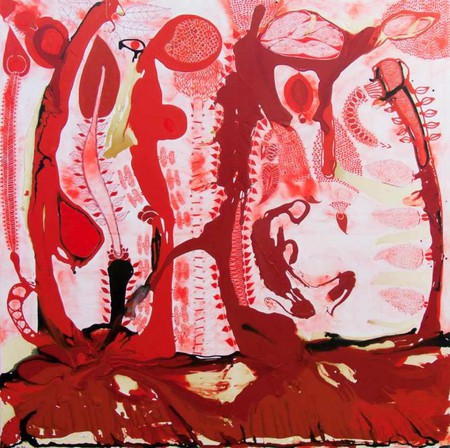 Sima Urale (b. 1968) is Samoa’s first female filmmaker. As a contemporary, visual storyteller, she retains the Samoan tradition of oral story-telling or fagogo. Her work is influenced by both her Samoan heritage and her experience of moving to urbanized Aotearoa—the Māori name for New Zealand. Her award winning short film O Tamaiti (1996) ‘The Children’, was filmed in Samoan, with minimal sound, and shot in black and white to avoid the kitsch stereotypes of Samoans. The story of a young boy forced to play parent in devastating circumstances won the Silver Lion for the Best Short Film at the Venice International Film Festival in 1996. Urale’s second short film, Still Life (2001), focusing on the challenges of ageing for a closeknit Pākehā—the Māori name for New Zealanders of European heritage—couple, became the first Kiwi short to win Best Short Film at the Montreal Film Festival and a Special Recognition Award at Switzerland’s Locarno Film Festival. 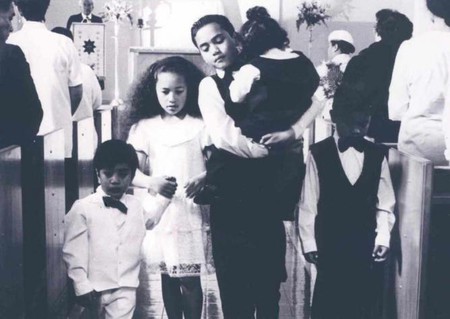 Tahitian Aline Amaru (b. 1941) is an innovator of the tifaifai—appliqué quilt—textile tradition of Tahiti. Usually decorated with floral or abstract patterns, tifaifai has been present in Polynesia since the early 19th century, probably associated with the introduction of needlework by missionaries’ wives. Amaru’s take on the tifaifai tradition incorporates its signature patterns with her own narratives, such as depictions of historical scenes. La Famille Pomare (1991) features a scene portraying the five generations of Pomare royal family in Tahiti—the last reigning monarchy before the French colonial rule took over in 1880. The figures are depicted in chronological order and reflect on the legacy of royalty in Tahiti. Amaru’s work combines raised appliqué with intricate hand embroidery, the lesser known nana’o sewing technique with the paumotu stitch that she learnt from her mother. The tifaifai has now also replaced the traditional barkcloth and is an important ceremonial object passed through families and generations as heirlooms. 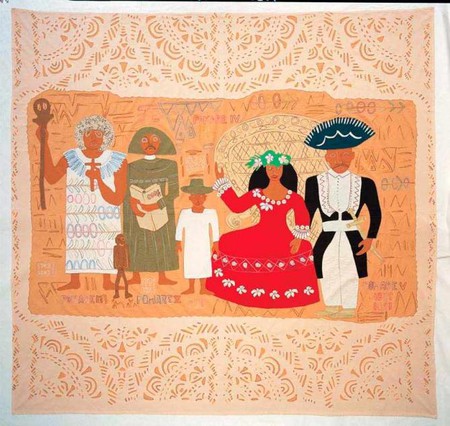 Tongan artist Kalisolaite ‘Uhila references diverse histories and ancestries, as well as the everyday and the multiplicity of being. His performance practice draws inspiration from Tongan notions of being and Euro-American art historical legacies of performance from the 1960s onwards. His experimental approach manifests ideas into metaphors that determine a way of being, and addresses his native culture by adopting cultural processes and stories into his performance language. Pigs In The Yard (2011) sees the artist share a shipping container with a pig. As Uhila attempts to co-habit with the pig, he explores the importance of the animal to his native Tongan culture and the ongoing colonial concerns of the Pacific Islands. In Ongo Mei Moana. Ongo Mei Moana (2015), ‘Uhila conducts the sea on Oriental Bay in Wellington for six hours, for five consecutive days, from low to high tide. The artist draws from Tongan oration and choreography as well as his family lineage of Tongan mariners by wearing ngatu and si leaves. The performance also references the ocean as something that unites people rather than divides them, and merges past, present, personal and global. 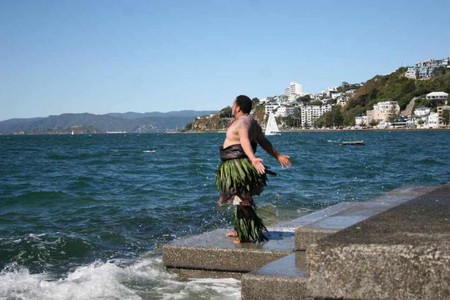 Cook Islands artist Itiri Ngaro (b. 1973) has moved from performing arts to moving image. His works are influenced by his background in music, theatre, song and dance. Ngaro’s practice is self-reflective, depicting an urban reality that blends with a Cook Island heritage. Although his video works are charged with Pacific symbolism, the artist believes that the ideas he conveys are common and universal to our existence. Te ‘Oki’anga o Te Vaerua (The Returning of the Soul) (2007) poetically engages with issues of cultural identity. Sand drawings transform into memories of a man trying to escape something, or perhaps himself. On the serene West Coast beaches a man performs movements of contemporary and traditional dance, taking audiences on a journey from tormented moments to the return of the soul. Ko te au ata mou kore (The Shifting Shadows) (2008) integrates physical, spiritual, and mental realms through experimental visual techniques. Opposing forces are at play: projected silhouettes act out social issues such as physical and alcohol abuse, while others portray angelic ancestors.

Multimedia artist Maile Andrade merges the contemporary and traditional to create works that reflect her native Hawaiian worldview. Using a wide range of media as well as innovative techniques mixed with traditional craft, Andrade believes that art is a powerful means of depicting the journey of one’s life and her practice is deeply rooted in Hawaiian heritage. Andrade explores and questions the use and perpetuation of stereotypes seen through many lenses, and how ethnography and anthropology have misappropriated cultural practices, cosmology, and spirituality. The artist re-appropriates the right of identifying herself—and her own people—challenging notions of the stereotyped Native Hawaiian. Kahuli (2011) is an installation of lauhala baskets and fused glass that references the notion of I Keia Manawa—the present day, where Native Hawaiians stand firmly, with their backs to the future and their eyes on the past. Andrade engages with the tension of this time and space, and the distortion of social, cultural, political and historical facts as if events never happened the way we remember them. This turmoil is in constant motion, as it changes, alters, and upsets people, places, situations. 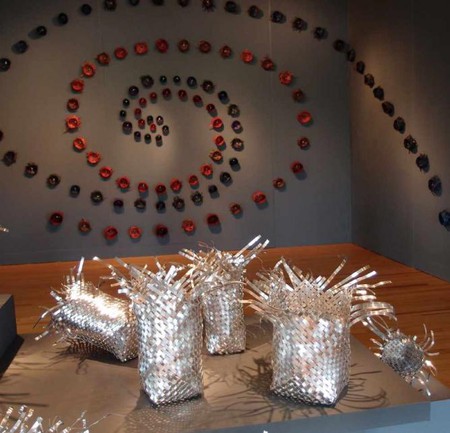 Samoan artist Paula Schaafhausen references her cultural heritage through the re-appropriation of imagery, materials, techniques and visual narratives to engage with global issues. In her 2014 project Ebbing Tagaloa, the artist highlights issues of global warming, particularly in relation to the Pacific Ocean and its islands. Due to the rising sea levels, many low lying islands in Oceania are facing harsh transformations, such as higher levels of salinity in the soil and receding coasts, to name but a few. In Samoan mythology, Tagaloa is the supreme ruler and traditionally the god of the ocean, who made the islands, the sky and the seas. Schaafhausen references the god in her moulded figurines made of coconut oil, koko Samoa and sand. The oil and koko are materials of daily usage in Samoa, while the sand references the land and seas that unite the people of Oceania. The statuettes are placed on custom made trays representing the five main Kiribati islands, which are one of the endangered low lying islands in the Pacific. During the time of exhibition, the figurines crumble and dissolve with the shifts in temperature and atmosphere.

One of the group of Tagaloa figures by Paula Schaafhausen in the ‘Ebbing Tagaloa’ exhibition at w:en:Enjoy Public Art Gallery | © Stuartyeates/WikiCommons

Samoan Fatu Feu’u (b. 1946) is primarily a painter, but he also experiments with a wide range of media including bronze, wood and stone sculpture, pottery design, lithographs, woodcuts and glass. His inspiration comes from Polynesian art forms such as siapo (tapa cloth), tatau (tattoo), weaving, carving and ceremonial mask making. Feu’u’s practice is deeply rooted in the concept of fa’asamoa—‘the Samoan way’—which embodies cultural conventions that bind family networks to traditional customs and ceremonies. His works merge influences from his native heritage as well as that of Euro-American cultures. Feu’u’s works display traditional Pacific motifs and designs, drawn from carving, tapa painting and tattooing. Incorporating ancient symbolism in contemporary media, he seeks to maintain a visual continuity for Samoan culture within Aotearoa/New Zealand. Feu’u’s art functions as va’aomanu – vessels of knowledge – that contain evocations of memory, migration and reconciliation. His work communicates narratives from Samoan oratory traditions, which passed allegories and legends from generation to generation. 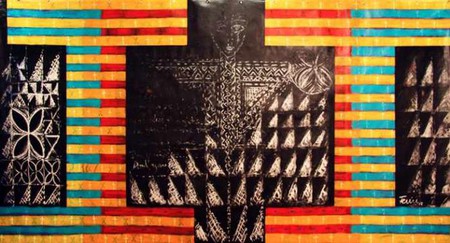