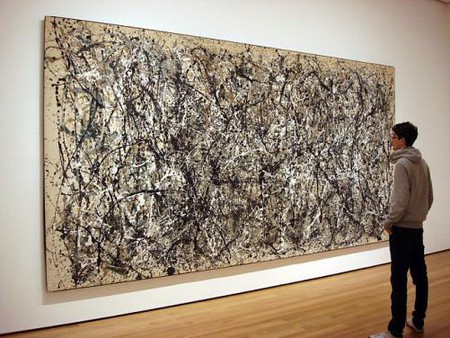 All American cowboy, raging alcoholic, volatile, reclusive, these popular ideas of mid century painter Jackson Pollock have shrouded him with a powerful mystique that has since dominated critical discourse around him. It is thus difficult to separate Pollock the pioneering abstract painter from Pollock the drunk who caused his own premature death from inebriated driving. Yet it is a mistake to attribute his highly energetic paint formations to a faltering, intoxicated mind. Pollock took great pride in the expert control that he held over his pigment. His paintings are the result of wide exposure to various art movements, intense experimentation and the desire to unite his curiosities on a single canvas. By combining his interests in Native American sand painting, American regionalism, European Surrealism, Mexican Muralism and his own ideas of the unconscious, Pollock created a highly personal artistic language that turned the attention of the international art world to the United States for the first time in history.

Born in Cody, Wyoming in 1912 to a family of sheep ranchers, Pollock spent his early childhood surrounded by the Wild West. He later moved with his family to Arizona, and then to California, where, in 1928, he enrolled at the manual arts high school. In his free time the young artist enjoyed afternoons at the Los Angeles County Museum, where he preferred the indigenous artworks of the Native American Indians to the more prominently displayed academic paintings. Pollock was soon expelled from school, and shortly thereafter left for New York City, where he took up residence with his oldest brother Charles and Charles’ wife Elizabeth. 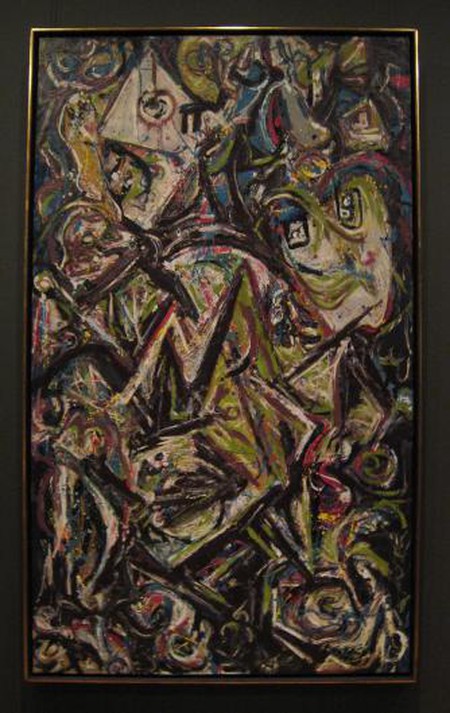 In a pompous declaration of individuality, Pollock floated about Manhattan in cowboy garb during his early days in the city. In want of an artistic direction, he soon began studies at the Art Students League under painter Thomas Hart Benton, who showed contempt for European Modernism in preference of a steadfast, local pictorialism. Although he ceased to study with Benton in 1933, his mentor’s regionalist idiom would remain with him in years to come, though not in a traditional sense. In 1936 Pollock had what may have been his most significant encounter, when he participated in an experimental workshop with Mexican Muralist David Alfaro Siqueiros. Siqueiros’ use of industrial paints inspired Pollock, who took to pouring, dripping, and hurling these more liquid materials onto his canvases. The large scale compositions of the Mexican revolutionary artists would also be echoed in the immense canvases on which Pollock would paint during his prolific career.

The other turning point for Pollock came through his introduction to American art collector Peggy Guggenheim. Guggenheim discovered the artist in 1943 at a panel selection organised at her New York Gallery, Art of this Century, and gave Pollock his first commission to paint a large scale mural for the foyer of her New York City apartment. Following this initial patronage, she orchestrated a one man show of his work in her gallery, and set him up with a five year contract, offering $150 a month for his paintings. She would later provide Pollock with his first exposure in Europe when, in 1948, Peggy was invited to show her collection in the American pavilion at the Venice Biennale.

Meanwhile, as Pollock became increasingly exposed to the non-narrative, avant-garde works of the Europeans, he began to appreciate their significance. In 1939 Picasso’s Guernica went on display at the MoMa where Pollock saw it for the first time. The Cubists shared the artist’s fascination for indigenous art, and following this encounter, elements of the Cubist aesthetic began to appear in his work. He had also, like the Surrealists, become intrigued by the subconscious when he was introduced to Jungian thought during sessions with his analyst. The artist soon came to see the subconscious is the source of all modern art. Pollock’s preference for depicting the inner world rather than an exterior reality caused critics to label him as an abstract artist, but he dismissed this categorization saying:

‘I don’t care much for ‘abstract expressionism’, and it’s certainly not non objective, and not ‘non representational’ either. I’m very representational some of the time, and a little all of the time. But when you’re painting out of your unconscious, figures are bound to emerge.’ 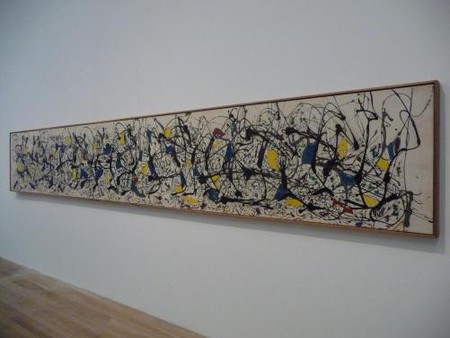 Moon Woman combines these aforementioned artistic concerns. A skeletal indication of a human form is illustrated in thick, black line, while the expressive strokes which fill the remainder of the canvas are done in greens, reds and yellows. The work recalls Picasso’s Girl Before a Mirror both in its palette and in the central female subject, illustrated in thick, black contour. In his poem ‘Favors of the Moon’ Baudelaire presented a bewitching goddess, ‘the poisonous nurse of all the moonstruck of the world’. The hallucinatory imagery of Baudelaire as well as that of the French Symbolist painters proved influential amongst American abstract artists of the time, and Pollock was likely affected by this circulating regard for French innovation. There is a totemic quality too in Moon Woman, seen in the mythic nature of the subject and in the ambiguous, symbolic imagery at the left of the canvas.

Soon after Moon Woman Pollock began to concentrate heavily on his drip paintings, which would become his most significant contribution to 20th century art. For these he laid the canvas on the floor, a method he likened to Native American sand painting. Surrealist notions of automatism are most excellently demonstrated in the works of this period. Instead of a brush, Pollock dipped a stick into a can of liquid paint, moving around the perimeter of the painting, allowing his pigment to fall in rhythmic layers across the surface. When Hans Namuth came to photograph and film the artist in his studio in 1950 he saw Pollock’s bodily movements as he painted as a kind of dance, giving birth to the term ‘action painting’. 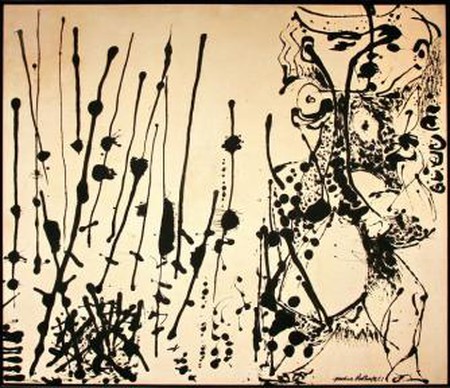 Alchemy is one of Pollock’s earlier drip paintings. The dense and vast area of this large scale work seems to eliminate the borders of the canvas, allowing it to merge with the real world environment. The painting becomes like a wall on which a symbolic language has been inscribed. Art historians attempting to understand the cave drawing like symbols which overlay the remaining splattered enamel have linked it to the title Alchemy. Pollock was not, however, responsible for the work’s title, which was given posthumously by his neighbors in East Hampton.

When Pollock became uninspired by the drip method following his rise to fame he entered a period of stagnation. He would still create a few marvelous paintings in the coming years, but mostly struggled, eager to find a new voice. After three years of sobriety he once again took up drinking, and finally, in 1954, crashed his car into a tree, ending his life.

Pollock’s impact on subsequent developments in art has been studied in depth. Guggenheim’s discovery of his work began an entire movement in the New York art scene as Abstract Expressionists like Robert Motherwell, Willem De Kooning and Mark Rothko rose to prominence. Hans Namuth’s film of Pollock’s painterly dance began further discussions of the significance of the body in art. Some argue that the roots of 1960s performance art can be tied to ideas of Pollock’s painting as a record of movement, suggesting that movement determines form rather than the opposite. Whether or not Pollock himself saw it this way, his fresh version of representation has offered a wealth of opportunities for engagement.