The Most Impressive Buildings in Milwaukee

<a href="http://www.digitalphotographyhobbyist.com/" target="_blank" rel="noopener noreferrer">Milwaukee skyline at night | © Ryan Schmitz / Flickr</a>
New York has the Empire Sate Building and Chicago has Navy Pier, but what architecture defines Milwaukee? Milwaukee itself has a fascinating architectural history as an industrial hub as well as a port and shipbuilding city. Many of Milwaukee’s original buildings are still standing today, but the insides might have received a hipster upgrade. Regardless of age or purpose, here are some simply unforgettable Milwaukee buildings.

Building
© Buzzshotz / Alamy Stock Photo
Standing on the shore of gorgeous Lake Michigan, North Point Lighthouse is a shining beacon of Milwaukee’s history and makes for some top-notch pictures. The lighthouse stands 107 feet (32.6 meters) above the lake and was once the tallest lighthouse on any of the Great Lakes. The building itself has been in the process of being renovated for most of the 2000s, and it now is in near-perfect condition.
More Info
Open In Google Maps
2650 North Wahl Avenue, Northpoint, Milwaukee, Wisconsin, 53211, USA
+14143326754
Visit website

Museum
© Stan Gregg / Alamy Stock Photo
Milwaukee Art Museum is arguably the most recognizable building in the entire city. Designed by Santiago Calatrava in the early 1990s (though finished in 2001), the museum recognized the technical advances in architecture to its fullest. The building is more commonly referred to as “The Calatrava,” as it was the first building the architect had ever built in America; tasked with making the museum a Milwaukee icon, Calatrava exceeded expectations with retractable sun screens in the form of two large wings that open and close in accordance with the museum’s hours. Certainly a feat of modern architecture, the Calatrava is purely one of the most beautiful buildings in the Midwest.
More Info
Open In Google Maps
700 North Art Museum Drive, East Town, Milwaukee, Wisconsin, 53202, USA
+14142243200
Visit website

Architecture often reflects a city’s culture, and that is certainly true with 100 East Wisconsin (a.k.a. Faison Building). Originally built on the site of the old Pabst Building, 100 East exhibits classic German architecture and stands as the third-tallest building in Wisconsin. The Pabst name is ironclad in Milwaukee, so architects remained true to the original building by giving 100 East a rectangular footprint and similar crown along the roof. 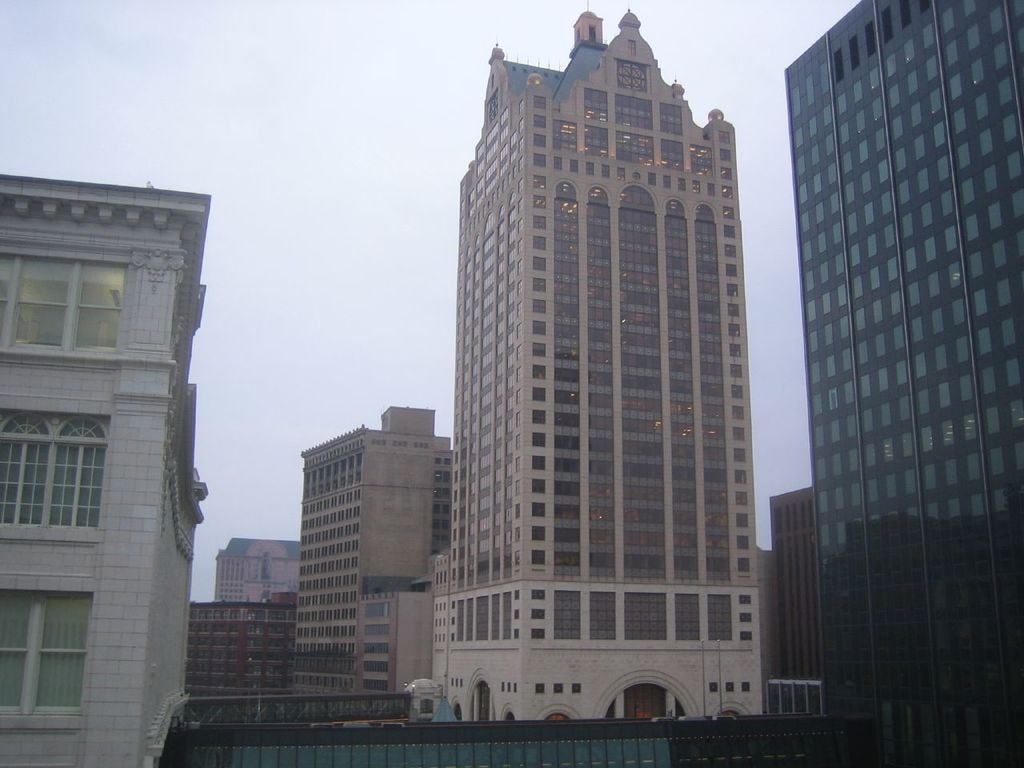 Historical Landmark
Allen-Bradley Clock, Milwaukee, Wisconsin | © David Wilson / Flickr
The building of Rockwell Automations—immediately recognizable by its enormous Allen-Bradley Clock Tower, a longstanding landmark in the city and the largest four-faced clock tower in the entire world (nearly twice the size of London’s Big Ben)—represents all of Milwaukee’s history within one place. One of the first buildings seen entering the city, Rockwell is an industrial powerhouse that shows how long and unfaltering Milwaukee’s industrial history really is.
More Info
Open In Google Maps
1201 South 2nd Street, Walker's Point, Milwaukee, Wisconsin, 53204, USA
+14143822000
Visit website