10 Great Places To Eat Out in Green Bay, Wisconsin

Nestled near the mouth of the Fox River is the heart of Wisconsin sports culture, the city of Green Bay. Whilst it’s best known as the home of the Green Bay Packers football team, with its impassioned fans packing Lambeau Field to the brim every home game, Green Bay’s dining scene is more than just themed sports bars. Check out this guide to the ten best restaurants in Green Bay.

Pizza lovers in Green Bay should look no further than Rustique Pizzeria + Lounge. Dine beneath the soaring, vaulted wooden ceilings of the dining room (the 112 year old building used to be a chapel). Start off with funky appetisers like fried plantains or baked bruschetta dip before progressing to the exquisite hand tossed pizza. Feel free to be adventurous with toppings like shrimp and asparagus or mac ‘n’ cheese, or stick with classic options like the margarita. For those not in the mood for pizza, there are sandwich and salad options available too. If the weather shapes up when you’re there for dinner, snag a spot on the deck and soak in the pink glaze of Wisconsin sunset whilst enjoying your meal with a glass of wine.

Eating at Three Three Five is more than a meal, it’s an experience. On most nights, the fresh, airy space hosts concerts and private events organised by ‘Traveling Chef’ Christopher Mangless. On select Wednesdays however, the public is invited to the private dining studio to join Mangless for ‘Open Market,’ a multi course, gastronomic spectacular in which the talented chef and his team prepare innovative, experimental dishes featuring locally sourced ingredients. It’s the chefs’ opportunity to be as creative as they’d like and the results are often unlike anything diners have ever tasted before. American Way magazine writes, ‘if sauté pans were electric guitars and tasting menus were set lists, Christopher Mangless would be the ultimate rock star.’ Reservations are a must for these performances.

Restaurant, Italian, $$$
Facebook
Email
Twitter
Pinterest
Copy link
Share
Map View
An authentic, romantic Italian bistro with a meticulously designed menu and a made from scratch mantra is an unusual find in Green Bay. Walking into Angelina Restaurant however, is like stepping into the intimate warmth of an Italian home at dinnertime. Meals are served in many courses, setting a relaxed pace. Cosy up under a replica of the ‘Mona Lisa’ with a glass or two of your favorite wine, or, if it’s warm outside, find a table out on the patio under the soft glow of light bulb strings. Dishes such as the ‘Pappardelle ai Gamberi’, a shrimp and pasta dish, or the ‘Salmone alla Griglia’, a grilled wild salmon topped with pesto lemon vinaigrette, will transport you to the streets of Rome.
Open In Google Maps
117 North Adams Street, Green Bay, Wisconsin, 54301, USA
+19204377248
Visit Website
Give us feedback

Gastropub, Restaurant, American, Vegetarian, Vegan, Wine, Beer, $$$
Facebook
Email
Twitter
Pinterest
Copy link
Share
Map View
The Packer crazed atmosphere of Green Bay is dynamic and often boisterous. If you’re looking to escape the sports centric crowd for a fine dining experience with the ambiance of an upscale Chicago restaurant, look no further than Chefusion. Since it opened several years ago, Chefusion has been gathering awards for both its facility and food. In 2009, then Governor Jim Doyle and the Wisconsin Department of Commerce presented it with the 2009 Wisconsin Main Street Award for Best New Downtown Business and in 2014, it received an OpenTable.com Diner’s Choice award. The establishment includes a restaurant on the first floor and a lounge on the second floor, featuring live music and experienced mixologists. Treat yourself to dishes such as the lobster and pork belly BLT or the veal short rib with ricotta gnocchi. Be sure to finish your meal with Chefusion’s luxurious lemon cake with ice cream.
Open In Google Maps
#2701, 307 North Broadway, Green Bay, Wisconsin, 54303, USA
+19204322300
Visit Website
Give us feedback 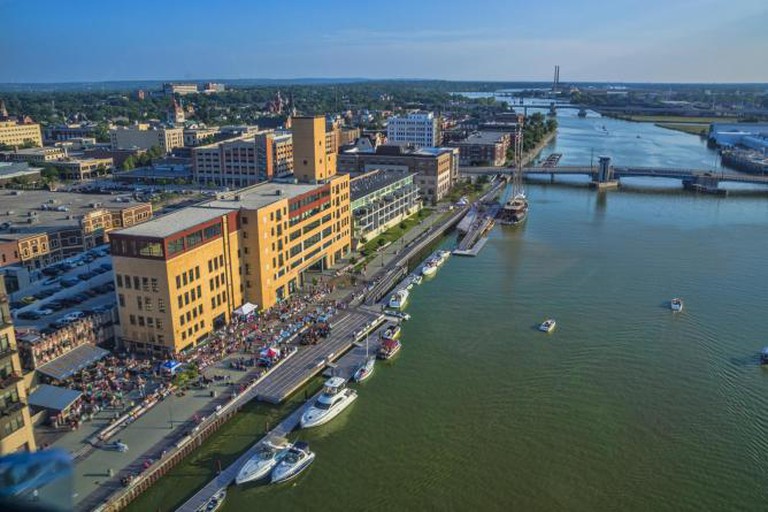 Downtown Green Bay CityDeck along the Fox River | © Rauglothgor/WikiCommons
Hagemeister Park embodies Green Bay’s spirit of camaraderie through and through. The park was initially home to Green Bay’s first minor league baseball team in 1905 through 1914, and then had the honour of becoming the Packers’ first playing field when the team was founded in 1919. When the Packers left three years later, the park continued to serve as a space for socialising, with an oval track for horse and harness racing, a dance hall, a bowling alley and a roller rink. After going unused for some time around the turn of the century, the land was revitalised and turned into a 9,000 square foot restaurant named after the original park in 2012. Choose between the rustic, elegant dining area or the patio dotted with cosy furniture and fire pits. Either spot is the perfect place to catch up with friends over craft beers and classic American cuisine.
Open In Google Maps
325 North Washington Street, Green Bay, Wisconsin, 54301, USA
+19208849909
Visit Website
Give us feedback

Hinterland itself isn’t off the beaten path, but some of the dishes on its adventurous menu may be uncharted territory for your taste buds. The chefs have made a conscious effort to embrace unusual food pairings while seeking out fresh, local ingredients to produce vibrant, unique dishes. Working closely with fishermen on the West and East Coasts and alongside farmers close to home, the culinary team is able to make elements like just caught fish and hand foraged mushrooms the stars of their dishes. The food is not the only delectable option however, Hinterland is also a celebrated brewery, winning the title of Wisconsin Brewery of the Year at the 2013 New York International Beer Competition. Wash the grilled abalone mushroom, Andouille encrusted Mahi Mahi, or wood fire grilled elk tenderloin down with brews such as the Packerland Pilsner or the ‘Bears Still Suck’ Rye. 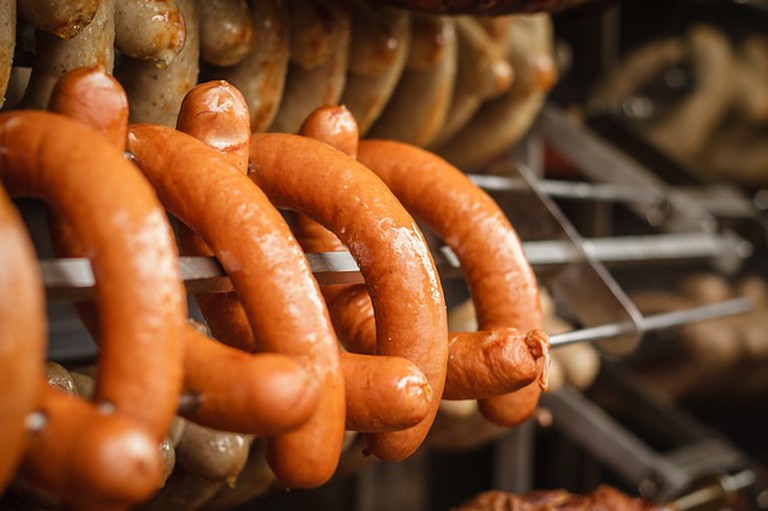 Kroll’s East, Green Bay
When a restaurant has been around as long as Kroll’s East, you know its owners are doing something right. In over 75 years, the only changes to come about at the restaurant are its prices. The building, named a historic site by the City of Green Bay in 2010, even includes its original basement, which was dug out by horses in the 20th century. Its menu still features simple yet savoured dishes like the bratwursts, award winning hamburgers, hand breaded perch on rye, and onion rings, the latter side dish was snacked on by President Barack Obama when he made a campaign stop in Green Bay in 2008. The Kroll family has perfected classic, homemade American style cuisine and preserved a welcoming, family friendly environment that has aged gracefully.

Restaurant, Bar, American, $$$
Facebook
Email
Twitter
Pinterest
Copy link
Share
Map View
Besides cheering on the Packers, there’s almost nothing more quintessentially Wisconsinite than vacationing with family and friends in a cabin in the northern part of the state. For those seeking a taste of the Northwoods within the city of Green Bay, a visit to Mackinaw’s Grill & Spirits will surely do the trick. The restaurant is housed in a log and stone building made of timber harvested from the owners’ family farm and pays homage to popular Wisconsin outdoor sports like skiing, hunting, fishing and snowshoeing with its stylish décor. The menu features everything from burgers and sandwiches to pasta, seafood and Mexican cuisine.
Open In Google Maps
2925 Voyager Drive, Green Bay, Wisconsin, 54311, USA
+19204068000
Visit Website
Give us feedback 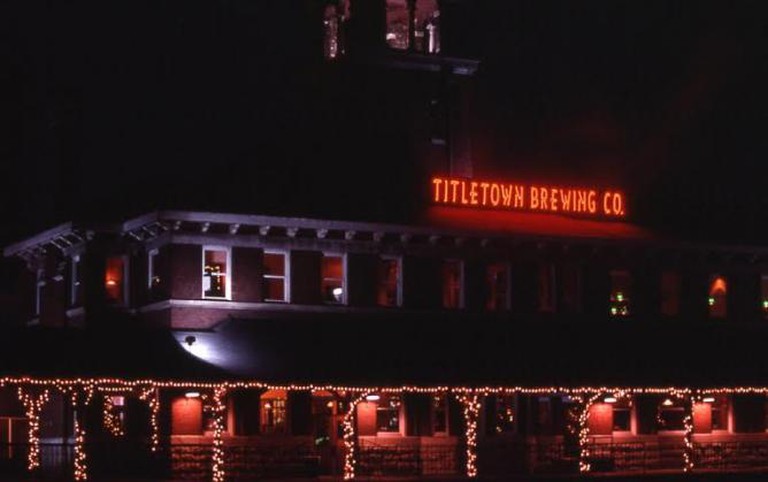 Titletown Brewing Co | © David Wilson / Flickr
Restaurateur Jill Bassett had a vision to bring a New York style bistro to Green Bay in the 2000s. Plae Bistro, ‘plae’ standing for ‘a place to laugh and eat’, is Bassett’s answer. Diners are provided with a menu with something for all appetites and budgets. Entrées range from Black Angus tenderloin medallions to gourmet pizzas and salads. Healthier fare like Ahi tuna is also a popular choice. Plae Bistro’s balance of quality and humility has earned it multiple accolades, including the prestigious title of Best Dining Experience of 2008 from the Independent Restaurant Association.
Open In Google Maps
#10, 1671 Hoffman Road, Green Bay, Wisconsin, 54311, USA
+19206327065
Visit Website
Give us feedback

Wisconsinites are more than a little passionate about their professional football team and who can blame them, considering the Packers have won the most championships in their league, earning Green Bay the nickname ‘Titletown, USA’. Titletown Brewing Co. honours the team’s history of excellence whilst also preserving a piece of the city’s past. The brewpub’s building is an old train depot built in 1899, which housed several companies throughout the 20th century but was vacant for some years in the 1990s. Luckily, it was resurrected when Titletown Brewing Co. came along, the building was finally placed on the National Register of Historic Places three years later. Celebrate this Wisconsin icon with an award winning Boathouse Pilsner Bohemian style Pilsner and an ‘Olden’ burger with a side of cheese curds at Titletown Brewing Co.