The Best Fairs and Festivals in West Virginia 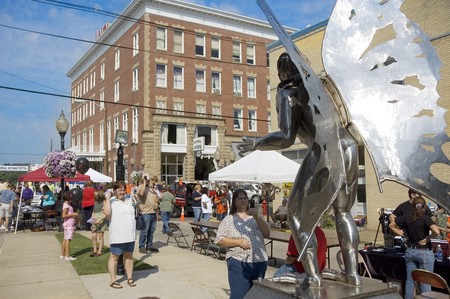 While the summer is a great time to visit West Virginia and get out into the outdoors, locals know that there are lots of things to do no matter what time of year. Here are nine great fairs and festivals in the Mountain State to check out.

If you need a taste of Switzerland in West Virginia, then Fasnacht is the place to be. Held on the weekend closest to Fat Tuesday, the small town of Helvetia puts on the traditional European-style party to celebrate the Swiss heritage of the area. The evening features a dance and the burning of old man winter. If you go, then make sure you get a meal at the Hutte restaurant and have a warm place to sleep (there will definitely still be snow on the ground). Also, have your best papier-mâché mask ready to go.

Want to learn more about the supernatural creature who haunts Point Pleasant, West Virginia? Then check out the Mothman Festival held in September. Although you can visit the Mothman Museum any time of year, the festival offers a unique opportunity to go on guided tours of the TNT area—where the Mothman has been said to appear. You can also check out the parade, eat Mothman pancakes, and get a stuffed Mothman to take home.

Every year, thousands of musicians pour into Camp Washington-Carver near Clifftop, West Virginia, for the Appalachian String Band Festival. This festival (known colloquially just as Clifftop) is for mainly Old Time Stringband musicians to get together and jam, rather than watch other bands play. If you’re not a musician, you can stop in to hear the contests on the main stage, just wander the grounds and listen to people playing together, or maybe stop by a campsite and make some new friends.

While many people associate Italian-American heritage with Chicago or New York City, many Italian immigrants came to West Virginia to work in the coal fields and timber industries in the early 1900s. Today, West Virginians celebrate their Italian heritage by eating pepperoni rolls, but also with the Italian Heritage Festival in Clarksburg, West Virginia. Be ready for exactly what you’d expect: good food, dancing, wine, and a big party.

Want to jump off the New River Gorge Bridge? Bridge Day, held every October, is your best chance. The festival shuts down the West Virginia landmark, giving BASE jumpers a chance to get their thrills, but it also includes a 5K race, a music jam, chili cook-off, and bands.

If you’re looking for something small, laid-back, and really special, check out the Maple Syrup Festival in Pickens, West Virginia. This very small town in central West Virginia puts on the festival on the third Saturday in March. The event is a classic small-town festival with craft vendors and food, plus lots of maple syrup and a pancake breakfast at the American Legion.

Every year on the grounds of the State Capitol Complex in Charleston, West Virginia, the Vandalia Gathering honors the traditional arts, music, crafts, and culture of the Mountain State. Held on Memorial Day weekend, Vandalia has craft vendors and food vendors set up outside, and music abounds with banjo, fiddle, mandolin, guitar, and flat-foot dance contests, informal jam sessions, a square dance, and an evening concert.

Although FestivALL has grown into a larger organization with many events, the June FestivALL is the premier event. The original event started in the summer of 2005 over three days and has grown into a 10-day festival with an art parade, almost a hundred musical acts, food vendors, and craft vendors, all with a mission of bringing art to everyone, and encouraging everyone to produce and appreciate art.

The forests in West Virginia are expansive and incredible and become a spectacular display of colors in the fall. In the heart of the Monongahela Forest, Elkins, West Virginia, has hosted the Mountain State Forest Festival every fall since 1930 to celebrate the forest and her beauty. Events include the coronation of the Forest Festival Queen and her court, a 10K road race, a country music show, and a buckwheat pancake breakfast, in addition to the arts, crafts, and wood products showcased throughout the week-long event.