A Brief History of the Trans-Allegheny Lunatic Asylum 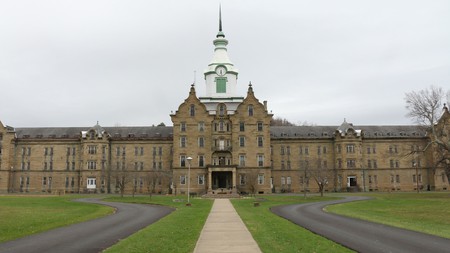 Open from 1864 to 1994, the Trans-Allegheny Lunatic Asylum, also known as the Weston State Hospital, saw the beginnings of modern psychiatry, the institutionalization of thousands of patients, and was finally forced to closed when the treatment of mental illness started changing and the facilities of the hospital were no longer considered adequate for patients.

Today, you can experience the 140-year history of this 242,000-square-foot (22,500-square-meter) National Historic Landmark through heritage tours that explore how the treatment of mental illness has changed or spookier ghost tours that showcase the paranormal activity that lurks inside the stone walls.

Construction started on the Trans-Allegheny Lunatic Asylum in 1858, two years after famed psychoanalyst Sigmund Freud was born and before scientific studies of mental illness had really begun. The asylum was built following the ideas of Thomas Kirkbride, a physician and advocate for the mentally ill. Unlike some doctors at the time, Kirkbride thought that mental illness could be cured with the proper treatment. He believed that a hospital with long wings of rooms and lots of sunlight and fresh air was the best environment for patients to recover. Architect Richard Andrews followed these ideas in the plans and builders used hand-cut stone masonry to create the four-story, rambling building that looks more like a castle than a home for the insane.

When your hotel is only 20 minutes away from this gem and you plan your Sunday soley around a two hour tour of one of the most haunted asylums in America only to find out that they're closed for renovations until March…. Complete and utter disappoint doesn't even begin to touch what I'm feeling right now. 😢😢😢 #whataletdown #onparforthecourse #hantedaf #bucketlist #transalleghenylunaticasylum

In 1861, at the outbreak of the Civil War, West Virginia was still just the western part of the state of Virginia. The hospital was still under construction in June 1861, when Union troops from Ohio marched into Weston. The soldiers were after money stored at the Weston Branch of the Exchange Bank of Virginia; they wanted to get to it before the Confederate troops could take it and bring it to Richmond. The Ohio troops brought the money to Wheeling, where it would help fund West Virginia’s statehood. The asylum became a Union camp and changed hands between Union and Confederate troops throughout the war. In 1864, the hospital accepted its first patients.

A post shared by Joe Matzerath Photography (@joe_matzerath_photography) on Jan 26, 2018 at 1:41am PST

In 1913, the name of the facility was changed from the Trans-Allegheny Lunatic Asylum to the Weston State Hospital, signaling another cultural change in mental illness treatment. Originally, the asylum was supposed to house 250 “insane” patients, but at the beginning of the 20th century, the number of inmates climbed as the definition of mental illness started including everyone from those with epilepsy to an alcoholic. The conditions of the hospital grew worse and worse. In 1935, the building suffered a fire. In 1949, The Charleston Gazette reported that some 1,800 patients were crammed into the building, and while sections that had been replaced due to the blaze were in good condition, overall, the facility was not. From the 1950s to 1980s, new treatments and a change in the culture of how people with mental illness were perceived resulted in a decline in the number of patients at the Weston State Hospital.

After the hospital closed in 1994, politicians and locals debated what to do with the expansive landmark and proposed everything from a Civil War museum to a hotel and golf course. In 2007, the building was finally sold, and today, the Trans-Allegheny Lunatic Asylum offers heritage tours that explore the history of the building and ghost tours. Some people have reported sounds, unexplained voices, and apparitions inside the stone walls, and a number of ghost-hunter TV shows have sought out spirits inside the asylum. You can take a two-hour paranormal tour or hunt ghosts for a whole day—if you can handle it.