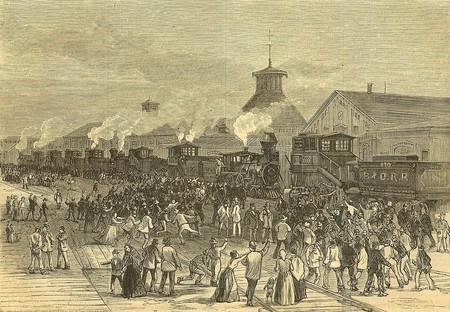 At the end of February 2018, teachers in all 55 school districts in West Virginia went on strike for an increase in pay and lower premiums through the Public Employees Insurance Agency (PEIA). They’ve vowed to stay on strike until their wishes are met, and are joining a long history of battles for workers’ rights in the state. Here is a brief history of workers demanding collective bargaining rights, better pay and benefits, and improved working conditions.

An economic recession in 1877 caused the earnings of the Baltimore & Ohio Railroad to drop. When the railroad announced a 10% cut in wages, workers called a strike from Baltimore to Chicago. In Martinsburg, West Virginia, striking workers tried to stop trains and the Governor called up the militia against the strikers. After shots were fired and a man died, the militia refused to engage any longer since the striking workers were their family and friends. The Governor then called in federal troops, and the strike ended in the summer. This showed owners in various industries how unprepared they were for striking workers.

Even with the help of the famous labor organizer Mother Jones, the United Mine Workers of America (UMWA) had trouble recruiting members because the coal mining companies were wealthy and powerful. In a court ruling, the government stated that mines could make employees sign a contract confirming they wouldn’t join the union, which allowed them to refuse employment to union members. The unions weren’t allowed to convince miners to break those contracts, either. When coal operators denied workers the right to unionize in southern West Virginia along Paint Creek, the Paint Creek-Cabin Creek Strike of 1912–13 began. The coal companies brought in a private police force and violent fights broke out over the next year. The miners went back to work eventually, but this was just the beginning of the Mine Wars.

The Battle of Blair Mountain

The focus on the war effort during World War One cooled down the conflict between unions and coal mine owners. But in 1920, the conflict between union organizers and the coal companies came to a head in Matewan, West Virginia, when agents tried to evict miners from company housing and violence broke out. The tension didn’t break, and a year later, miners marched on Blair Mountain in the largest uprising since the civil war to demand their right to unionize. Miners marched, the National Guard was called in, bombs dropped from government airplanes, and the organizers of the march were accused and tried of treason, but found not guilty. The battle has become a source of pride for many West Virginians – the red bandanas they wore turned “redneck” into a positive term – and created generations of union organizers in the state.

The election of Franklin Roosevelt brought more opportunities for unions and workers. In 1933, the National Industrial Recovery Act allowed workers to collectively bargain for rights, outlawing the practice of making workers sign contracts that said they would only be employed if they were not members of a union. Union membership grew not only in coal, but also with glassworkers and steelworkers.

From the New Deal to Today

Since the New Deal, many workers in many industries have unionized. Many of those industries – such as coal and steel – have seen decreases in the number of employees, so overall union membership has gone down, but they haven’t been afraid of striking for better working conditions during the Black Lung Strike of 1969 or medical benefits in 1977. 1989 was the last large strike in West Virginia, when coal miners joined with fellow union members in southwest Virginia and Kentucky to protest the elimination of benefits for union members.