Following the success of his exhibition Beyond the Object at the Halcyon Gallery, London, which attracted over 25,000 visitors in its brief run from February – June 2014, the eyes of the artistic world have turned once again to the eminent, experimental sculptor Dale Chihuly (1941 – ) whose revolutionary and intricate glass works have made him one of the greatest artists of the generation. 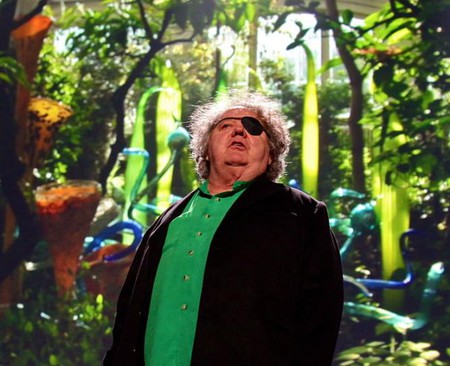 ‘As a kid I was always interested in glass, says Chihuly when asked about his unusual but nonetheless beautiful artistic sphere. ‘But it wasn’t until I had to take a weaving class at the University of Washington in the early 1960s that I made my first artistic use of it: I started weaving small pieces of glass into tapestries.’ Since then, Chihuly has become one of the most well-known sculptors and artists of the age. He is one of only four American artists whose work merited a solo show in the Louvre, and his sculptures have been exhibited everywhere from the V&A in London, to Dublin Castle, to the Ritz-Carlton Millenia Hotel in Singapore.

Born in 1941 in Tacoma, Washington, Dale Chihuly was introduced to glass while studying interior design at the University of Washington. After graduating in 1965, he enrolled in the first glass programme in the country, at the University of Wisconsin. He continued his studies at the Rhode Island School of Design (RISD), where he would later establish the glass programme and teach for more than a decade. But it was following his work experience at the Venetian glass factory on the small island of Murano after receiving a Fulbright Scholarship, that Chihuly really came to perfect his glass-blowing skills at a relatively young age. He says, ‘It was there I first observed the team approach to blowing glass, which is critical to the way I work today.’ 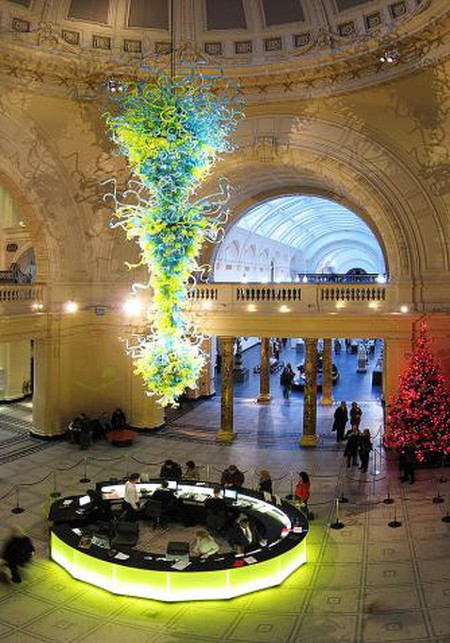 Chihuly’s commission from the Victoria and Albert Museum | © Laurascudder/WikiCommons

Chihuly’s work is notable for its avant-garde ingenuity and intricacy – glass does not look like glass when under Chihuly’s control. His fascination with the earthly and ethereal means that Chihuly’s large-scale installations often present images in botanical, or underwater settings inspired by nature and the environment. The texture of the glass, blown to a multitude of colours, creates a truly escapist and even surreal visual experience. The recipient of 12 honorary doctorates and two fellowships from the National Endowment for the Arts, Chihuly is a man who defies limitations. And this is seen in his expansive work which has been shown in more than 200 museum collections worldwide.

Among his most famous collections and installations is his ‘Chihuly Over Venice’ (1995), for which he created sculptures at glass factories in Finland, Ireland, and Mexico, and then installed them over the canals and piazzas of Venice. Four years later, more than 1 million art-lovers attended the Tower of David Museum in Jerusalem to see his ambitious ‘Chihuly in the Light of Jerusalem’ (1999). Ambitious in that it required 10,000 pieces of glass to be transported in 12 shipping containers from Japan, the U.S. and Finland in order to construct the monumental glass structures which merged with the ancient skyline of the Citadel.

Continuing his lifelong admiration for glasshouses and botanical structures, Chihuly began his ‘Garden Cycle’ in 2001 at the Garfield Park Conservatory in Chicago before exhibiting at the Royal Botanic Gardens, Kew, near London, in 2005. Chihuly Garden and Glass, a long-term exhibition, opened at Seattle Center in 2012. But, the piece that is most often considered his magnum opus is his commission for Singapore’s Ritz Carlton Hotel. On opposite sides of the eponymously named Chihuly Lounge, his two gigantic structures ‘Sunrise’ and ‘Sunset’ dominate the setting. ‘Sunrise’, a yellow-and-orange glass installation on the east-facing wall of the Chihuly Lounge, and ‘Sunset’, a yellow-and-green installation on the west-facing wall of the Greenhouse, demonstrate beautifully Chihuly’s mastery of glass that has been perfected over years of practice.

Chihuly’s experimentation with natural forms and glassy textures bridges the distinction between art and abstraction, delighting the eye with brilliant excess and sumptuous structures. His current exhibitions include: