What It’s Like to Participate in the Fremont Solstice Parade 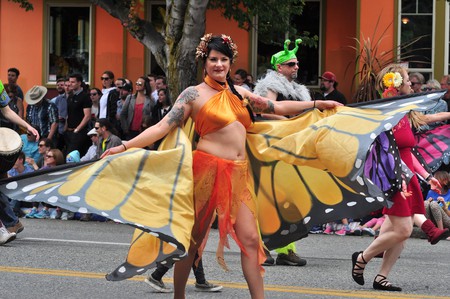 It’s that time of year again when a boatload of naked Seattleites paint their bodies and bike around the Fremont neighborhood for the Fremont Solstice Parade.

That’s right. Seattle hosts an annual naked bike ride to mark the beginning of summer, and 2018 happens to be its 30th anniversary.

“It’s liberating, and so much fun,” says Stephanie Ryder, a Pacific Northwest native who participated in the event in 2016. “As soon as I turned the corner and heard everyone cheering along the parade route, I was so excited that I didn’t even think about the fact that I was naked.”

The parade, which takes place on June 16, 2018, begins in Fremont and ends at Gas Works Park, where there are food trucks, bands, and booths with a variety of artwork by local artists.

The Fremont Solstice Parade started in 1989 thanks to the Fremont Arts Council, the nonprofit organization responsible for the famous Fremont Troll that lurks underneath the Aurora Bridge. It has been and continues to be a way to showcase the overwhelming amount of creativity happening in the community.

There’s more to it than just getting naked and hopping on a bike. Cyclists and other participants are encouraged to show off their artistry with elaborate body painting, with a dedicated Paint Party before festivities begin. “We went as a group of unicorns,” says Ryder. “It’s not required to be painted, but it was definitely more fun, in my opinion.”

Bicycles galore at the Fremont Summer Solstice Parade this past weekend. 🚴 Get featured on our IG by tagging us and hashtagging #thebicyclerepairshop with a picture from one of your trips with our bikes! . . . #fremontsolsticeparade #summersolstice #summer #parade #bodypaint #bike #bicycle #bikerace #bikerental #bikeseattle #bikerepair #fremont

The parade has grown significantly since its inception. “There are so many participants that you don’t feel like the attention is on you,” explains Veronica Keenan, another Pacific Northwest native who found herself at the parade in 2016. “I had a great time,” Keenan continued. “It was silly and fun but also empowering to be riding around in the nude.”