This U.S. State Built a Bridge Just for Squirrels 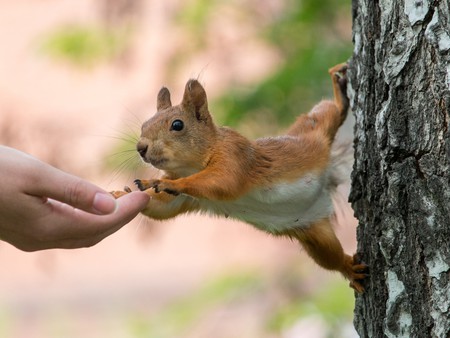 Of the nearly 8,000 bridges stretching across Washington State, not all are used for motor vehicles, particularly in Longview—a small tourist hub with a bridge just for squirrels.

Situated on the border of Oregon and Washington, Longview may not be the most popular city in the Evergreen State, but it still offers the green and often unusual experiences synonymous with Washington itself. Tourists from all over continue to visit Longview for its proximity to Castle Rock—the entrance to the Mount St. Helens National Volcanic Monument. And, in 1963, the city boasted a new international attraction: squirrels. Thanks to a man named Amos Peters and his Nutty Narrows Bridge, Longview is home to Washington’s most unique bridge built solely for squirrels.

As a local builder in Longview, Amos Peters spent a lot of his time outside. One day, while working at the city’s Park Plaza, Peters and his coworkers noticed a number of local squirrels attempting—and unfortunately failing—to cross Olympia Way, a busy intersection. Why did those squirrels cross the road? Because an office building across the street continually left behind food for their furry friends.

With their already existing skills, Peters and his coworkers took to the drawing board and created a cute but, more importantly, effective solution to save the local wildlife: the Nutty Narrows Bridge. When the group brought their plans to the city council, there was little to debate. Everyone was aware of the issue and so were immediately onboard. Council member Bess LaRiviere even offered up the bridge’s name, playing off of the Tacoma Narrows Bridge.

Using aluminum piping and an old fire hose, Peters—along with architects Robert Newhall and LeRoy Dahl, engineer Donald Kramer, and construction peer Bill Hutch—built a 60-foot-long (18 meters) suspension bridge. Altogether, the project cost a total of $1000, and it didn’t take long before witnessing its success. Almost immediately, squirrels began trekking across the Nutty Narrows Bridge to gather food before returning to the Park Plaza, even bringing their kittens along with them.

The Nutty Narrows Bridge didn’t just become popular with squirrels either. The mini-bridge gained international attention, receiving countless letters from people all over the world thanking them for saving the local wildlife. And in 1983, when Peters temporarily took the bridge down for restoration, Disney’s Chip and Dale and Mickey Mouse showed up to the Washington town to help rededicate it.

The future for local squirrels

The Nutty Narrows Bridge continues to stand today. Locals even string lights across it during the holidays. Its popularity hasn’t dwindled either. The bridge has actually grown since its establishment in 1963—not in size but in numbers. Longview added a sister bridge in 2011, another in 2012, and three more since then, making a total of six squirrel bridges. And, according to the city’s website, it looks like more squirrel bridges are on their way.