This Restaurant Is Serving Pho by the Gallon 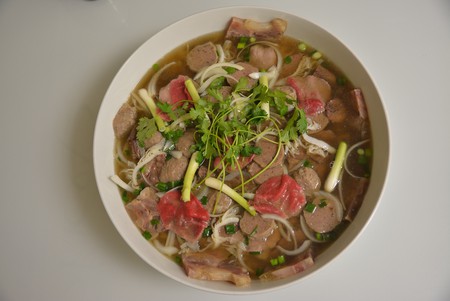 With the typical Vietnamese restaurant fare of spring rolls, udon noodle soup, rice dishes, and pho, Dong Thap Noodles could easily blend into the Seattle food scene. What makes it stand out are its noodles, freshly made on-site, and their “Super Bowl”: a gallon of pho.

Claiming to sell the largest bowl of pho in the world, which seems entirely likely, Dong Thap’s Super Bowl is no small feat to make or to consume. With three pounds of noodles, which take four days to make on-site, three pounds of meat, including pork brisket, steak, and meatballs, and three liters of broth, customers hoping to order the Super Bowl must make an appointment to provide adequate time for the meal’s preparation. 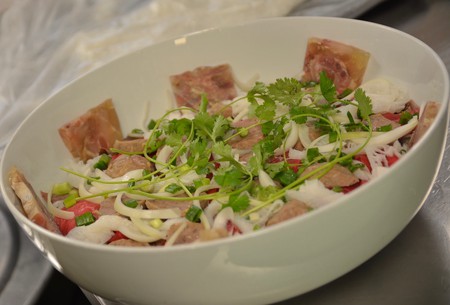 The Super Bowl, which also attracts Seahawks fans seeking to support a different kind of Seattle Super Bowl, costs $45. Alternatively, customers can participate in the Pho Super Bowl Challenge: any individual who can eat an entire Super Bowl in no more than 90 minutes doesn’t have to pay for the meal and receives a $500 prize. Plus, their photo will go on Dong Thap’s Wall of Fame.

Now, here are a few more details regarding the challenge. The bowl is 16 inches in diameter and five inches in height. The pho fills up the majority of the bowl, leaving an inch and a half at the top. The 90 minutes begin as soon as the bowl is served. Waiting for it to cool down before you start is part of the time; however, you can ask the staff to keep the pho in the kitchen a little longer before serving it to allow it to cool. Though you can use the bathroom during the challenge, such breaks are not subtracted from the time limit. Also, it is actually part of the rules that you cannot throw up to continue eating. 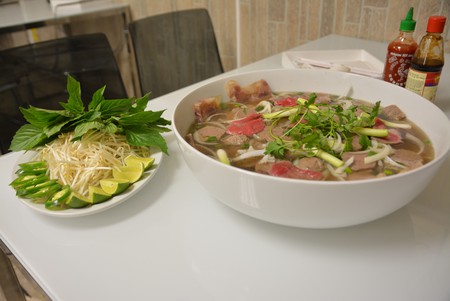 Finally, a quick shout-out to Ro Hin and Greg Davis, the only two participants to date—of over 120 individuals who have tried—to complete the Pho Super Bowl Challenge. Ro Hin managed to finish the entire bowl in 37 minutes on December 1, 2016, and Greg Davis, a member of the U.S. Olympic Rowing Team, finished his bowl in an hour just on November 27, 2017. For those who can’t match up to their success, the Super Bowl may still be worth trying with some friends in tow; you’ll probably only need to order one to share.