The Best Hotels to Book Near Pike Place Market, Seattle 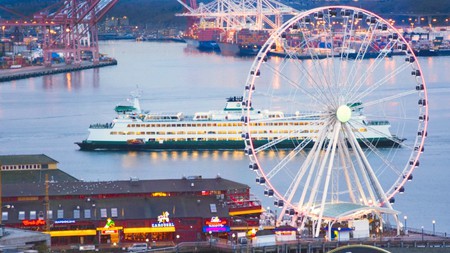 There's plenty to do on a trip to Seattle, but Pike Place Market is one spot you can't miss | Courtesy of Inn at the Market / Booking.com

Check out the perfect hotels to book on Culture Trip so you can eat and drink like a champion in Pike Place Market – the heart of Seattle’s thriving culinary scene.

Seattle might have spawned grunge music with the likes of Nirvana and Pearl Jam originating there in the early 1990s, but now it’s the thriving food scene that’s forging a new identity for the Pacific Northwest’s biggest city. Central to this is Pike Place Market – a 5.6mi (9km) wonderland of over 225 independent artisanal shops, foodie stalls and restaurants. The local hotels – many with views overlooking Elliot Bay – provide the perfect basecamp for a food-lovers’ getaway. And they’re all bookable on Culture Trip. 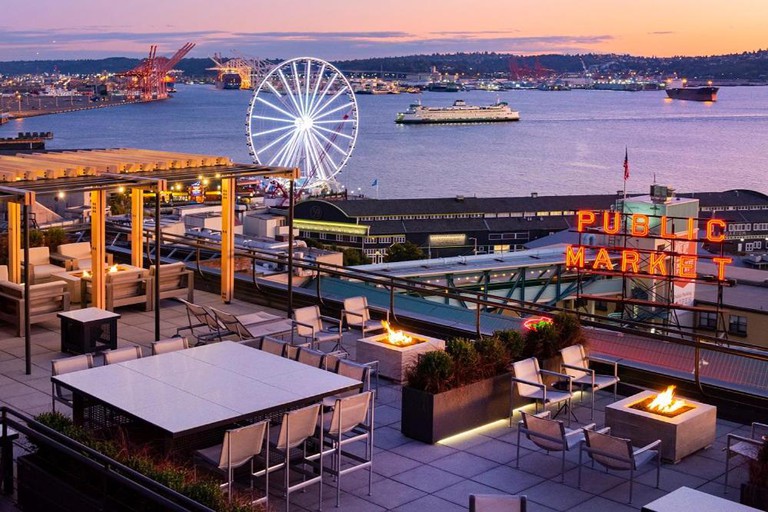 Courtesy of Inn at the Market / Booking.com
For the foodie traveller that treasures convenience, Inn at the Market is the place to rest a well-fed head. The only hotel within Pike Place Market, you’ll get a waft of its many culinary delights from the rooftop bar. Head there at sunset for some local Columbia Valley cabernet sauvignon and wave to the ferries chugging across Elliot Bay. Don’t leave without dining on butter-soft sashimi at Sushi Kashiba – head chef Shiro Kashiba has been hailed as “Seattle’s grand sushi master” by Bon Appétit magazine and “Sushi Sensei” by the Seattle Times. Sign up for the multi-course omakase experience and find out why. 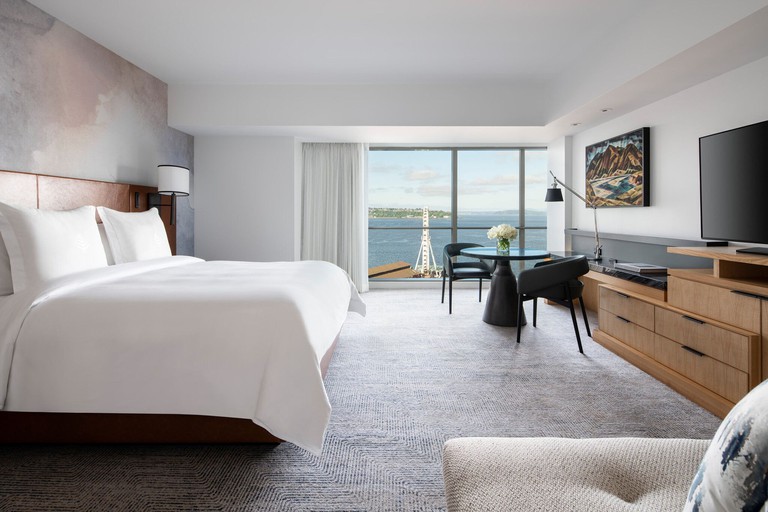 Courtesy of Four Seasons Hotel Seattle / Expedia
Pounding those market streets can be hard work. Thankfully, the luxurious Four Seasons spa – decorated in local basalt rock and glass tiles for an authentic flavor of the Pacific Northwest – will help ease away those aches and pains. If you can drag yourself away from the infinity pool, the outdoor firepit also overlooks the bay and makes the perfect place for a toasty nightcap. Stay close to the water and head to Lake Union for some kayaking – ask the concierge to organize your suit and vessel hire. 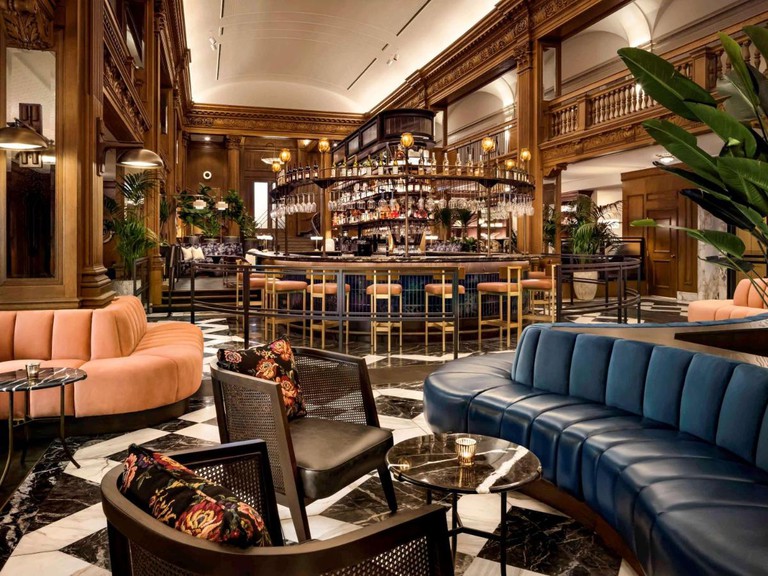 Courtesy of Fairmont Olympic Hotel – Seattle / Booking.com
With over 200 miles of shoreline, it’s fair to assume that Seattle has a love for seafood. The Fairmont Olympic Hotel has its own oak-paneled oyster bar, Shuckers, formerly a 1930s haberdashery and a must-visit for anyone looking to sample local mollusks and other fishy classics. Elsewhere, the 450-room hotel has an indoor pool and hot tub open until nightfall, and its own rooftop apiary where 180,000 bees thrive and provide honey for the hotel’s four bars and restaurants. 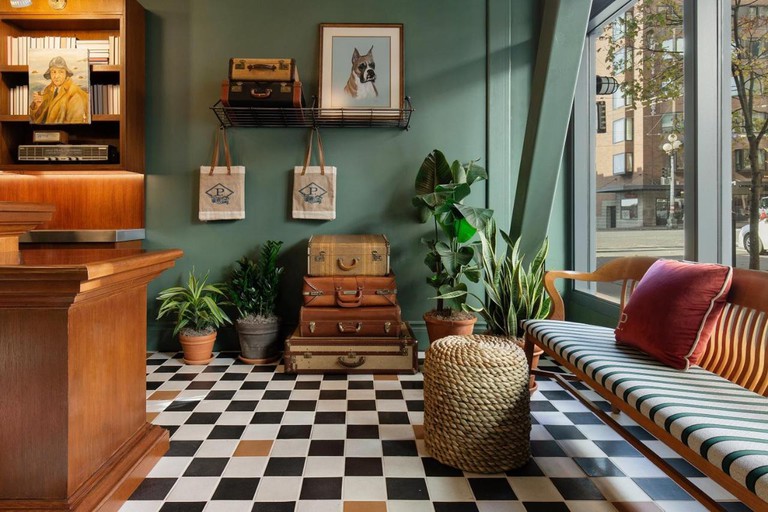 Courtesy of Palihotel Seattle / Booking.com
The Palihotel is a lobster shell’s throw from Pike Place Market, and its rooms offer a modern take on homely North American interior design. Most have their own Smeg refrigerator and all have luxurious rain showers, to refresh visitors before – or after – a day exploring the market’s nooks and crannies. In-house eating is at the Hare and Hunter – a casual American diner offering an all-day menu of classics like eggs benedict, burgers and a trusty turkey melt, ideally washed down with a Pine Street Old Fashioned. 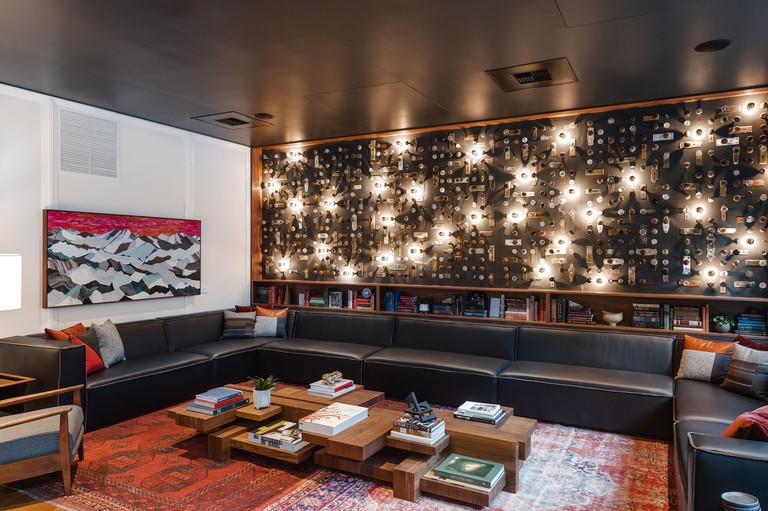 Courtesy of The State Hotel / Expedia
90 steps from Pike Place Market, this building has been a stalwart of downtown Seattle since 1904. Reinvented into the State Hotel, it now offers contemporary design mixed with bespoke touches: think premium, locally made beds and bedding, artwork by Seattle creators and large windows overlooking Elliot Bay that swamp the rooms in light. Don’t fancy the market rush? The laidback Ben Paris diner will furnish you with unctuous burgers and moreish, modern small plates like seared Albacore tuna loin. 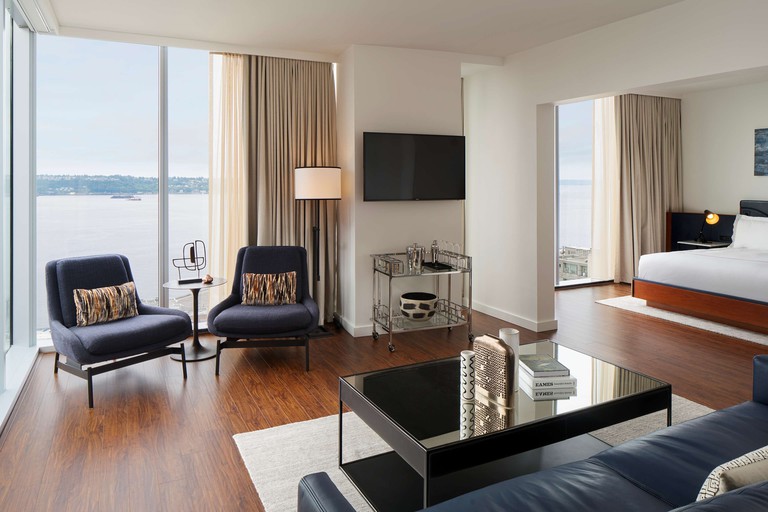 Courtesy of Thompson Seattle / Expedia
Floor-to-ceiling windows packing views of the Puget Sound and Pike Place Market make it hard to leave your room at this luxury boutique hotel – as will the come-hither Sealy Tempur-Pedic mattress and 400 thread count linens. Reserve a spot at the Nest, its rooftop cocktail lounge, and splash out on the hotel’s Scenic Seattle excursion – which whisks you through the downtown skies, over the water and city sights, in a private seaplane. 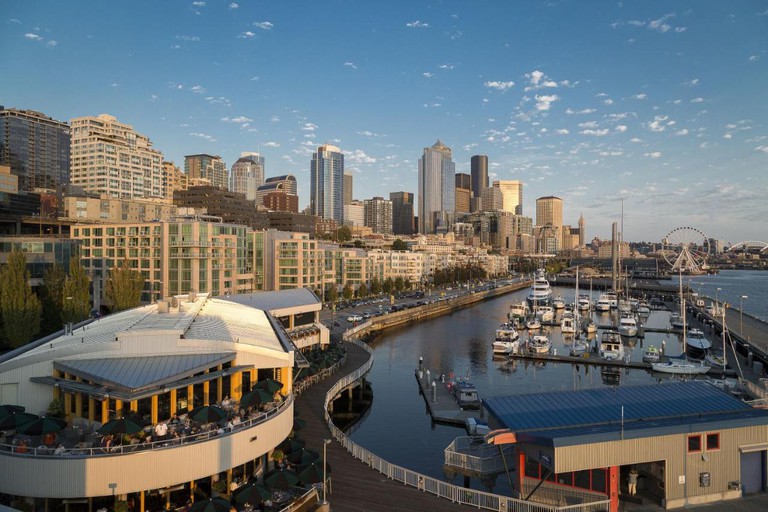 Courtesy of Seattle Marriott Waterfront / Booking.com
This waterfront hotel has the benefit of mountain and bay views from almost all its rooms. Whether it’s winter or summer, there’s a pool to suit – with indoor and outdoor offerings open until 11pm. The Hook & Plow is your locale for traditional, gut-busting breakfasts like corned beef hash and house-made buttermilk pancakes. Maybe let the food go down before you venture up the Seattle Space Needle though – this vertigo-inducing icon of downtown is less than a mile away. 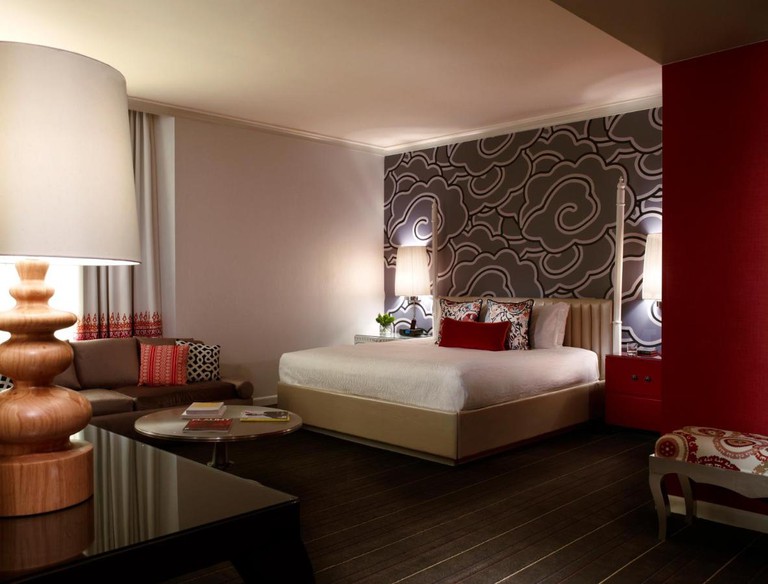 Courtesy of Kimpton Hotel Monaco Seattle / Booking.com
With chandeliers and august columns, the Kimpton Hotel Monaco’s lobby sets the scene for a salubrious stay. Rooms are adorned with bold-print cushions, velveteen furnishings and deep, tile-framed bathtubs, while the Outlier bar bears the kind of stressed leather stools and craft cocktail list you’d expect in a contemporary urban watering hole. All this is just a five-minute walk to the foodie delights of Pike Place Market. Limber up on your free yoga mat before heading over there, and don’t bother calling the dog sitter because pups stay for free. 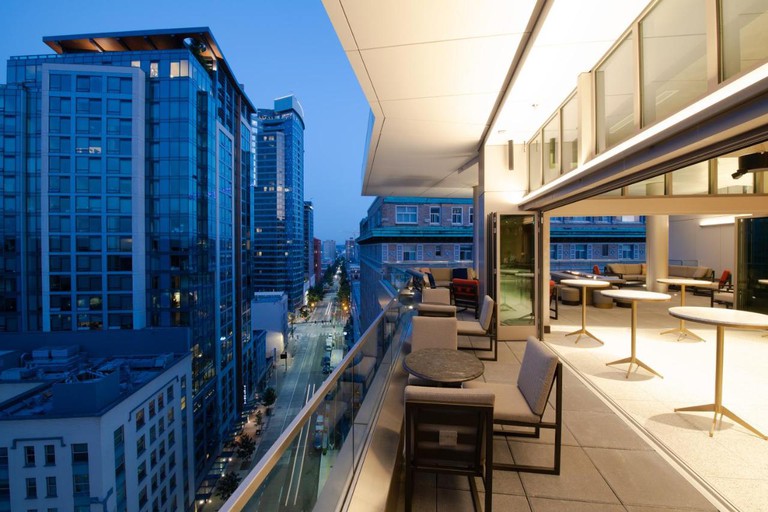 Courtesy of The Charter Hotel Seattle, Curio Collection by Hilton / Booking.com
Park up in this downtown hotel’s underground garage and give yourself over to the swathe of options available nearby. You’re just four minutes’ walk from Pike Place Market and a 12-minute stroll from the Seattle Aquarium, with its Window On Washington Waters exhibit – a 120,000 gallon tank filled with sea life indigenous to the Pacific Northwest. Head up to the hotel’s Fog Bar for a dungeness crab roll, or a freewheeling spirits menu including over 60 whiskeys and bourbons. 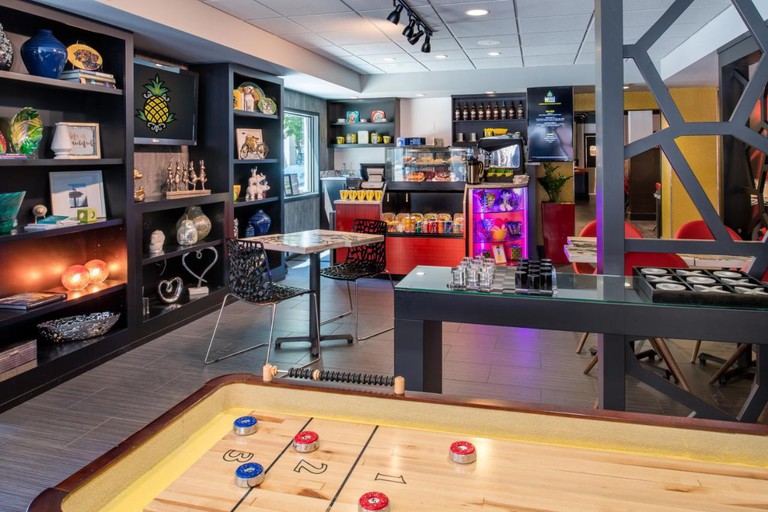 Courtesy of Hotel Five – A Staypineapple Hotel, Seattle / Booking.com
Seasoned Seattle visitors will recognize the hotel’s pineapple-colored bikes zipping around downtown. Expect flashes of signature yellow to be painted throughout your visit to the Hotel Five – on pens, umbrellas, plates and the free pineapple treats dished to every visitor upon arrival. There’s a Keurig coffee machine in every room and the ethos of the Staypineapple chain is hospitality without stuffiness. So don’t hesitate to ask the staff – each denoted an “Everything Person” – for their Pike Place Market recommendations.

Looking for somewhere else? Book a stay at the best luxury hotels in Seattle now with Culture Trip, or if you’re traveling with a four-legged friend, choose a room at one of the best pet-friendly hotels instead. Find out how best to spend a weekend in the Emerald City, and don’t miss the best beaches within reach.