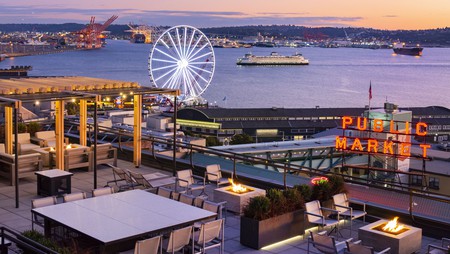 Seattle, on the West Coast of the US, may be home to big business such as Starbucks and Amazon, but it bristles with artistic flair and innovation. You can see it for yourself in this collection of design-forward boutique hotels.

The true delights of Seattle are to be found in the underground scene. Book an indie boutique hotel and you can explore the artistic flow of the city while listening to grunge, drinking craft beer and meeting the independent sellers at Pike Place Market. 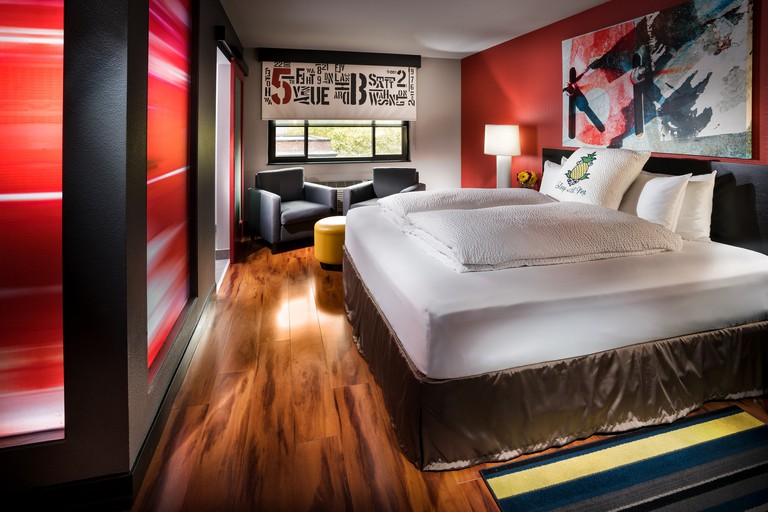 This boutique hotel lies among Seattle’s most popular attractions, including the Seattle Center, the Seattle Waterfront and Pike Place Market. Choose between a (Not So) Standard Room and a suite, both of which include Keurig coffee machines, cozy bathrobes and Bluetooth docking stations. As a green hotel, it uses bath amenities that are 99 percent natural and biodegradable, in-room recycling and glass dishware to eliminate the use of plastic. The hotel also offers complimentary pineapple treats in the lobby every day. 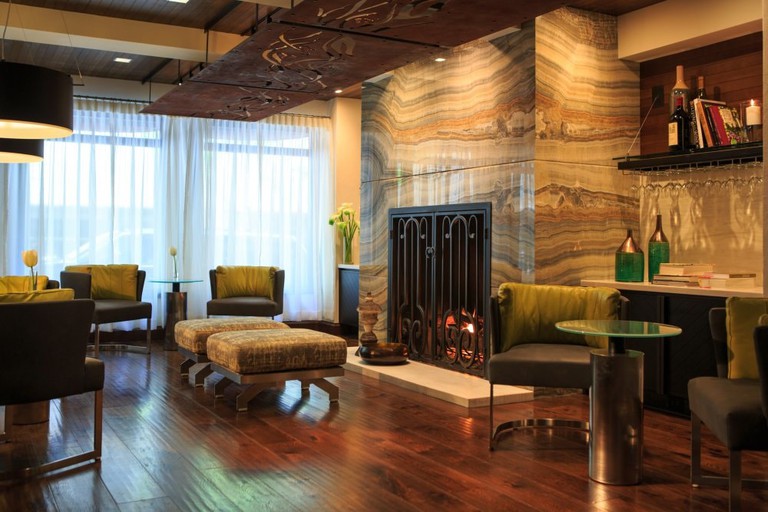 This hotel is one of three Kimpton boutiques in Seattle. Hotel Vintage is the place to stay for a wine-country getaway – without leaving the city. You can sip world-class pinot noir from Washington wineries at the evening social hour. With high-speed wifi, a 24-hour fitness center and valet parking, the hotel’s amenities promote convenience and relaxation at every turn. It also offers complimentary hotel bikes and a Zipcar location. 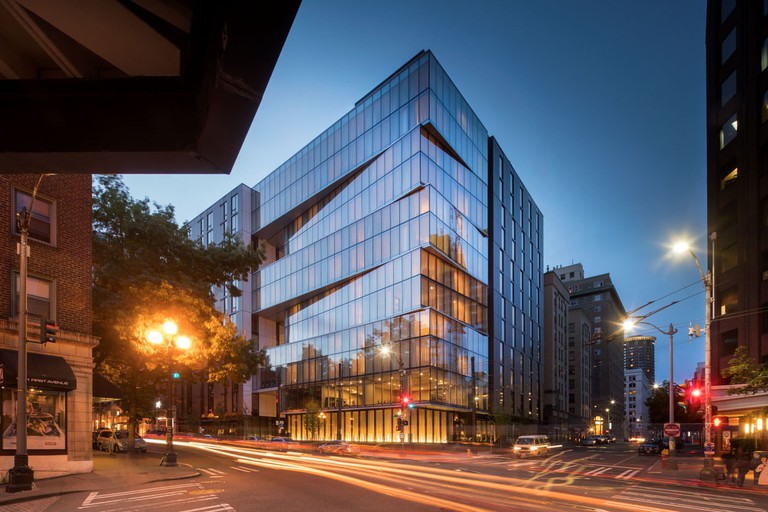 Only two minutes from Pike Place Market, Thompson Seattle takes advantage of its stunning surroundings, with floor-to-ceiling windows throughout the hotel, including in the 24-hour fitness center, to keep you as close to Elliott Bay and the Olympic Mountains as possible. It also has two excellent on-site restaurants. Conversation presents locally sourced foods with an international twist, while the Nest is the hotel’s rooftop bar, lounge and terrace that serves creative cocktails and wine. 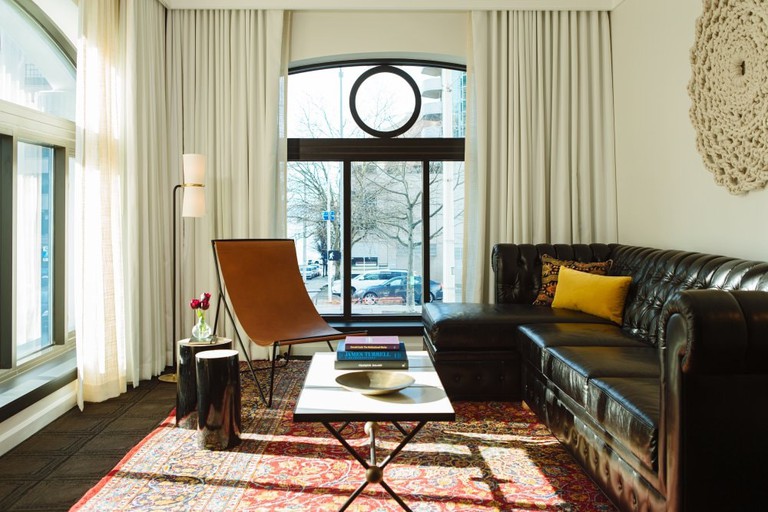 The smallest Kimpton hotel in Seattle, the Palladian, was named after the Palladian windows of the 1910 structure in which it resides. The 97 rooms pay homage to history (think clawfoot tubs) while also keeping it modern with decor such as pillows featuring modern-day celebrities as Napoleonic-era heroes. Wellbeing is a priority here, with an in-room yoga mat, massage treatments and a 24-hour fitness center. There’s also an excellent bar, Pennyroyal, where you can jump-start your night in the Belltown neighborhood with a shareable punch bowl made with strawberry tequila. 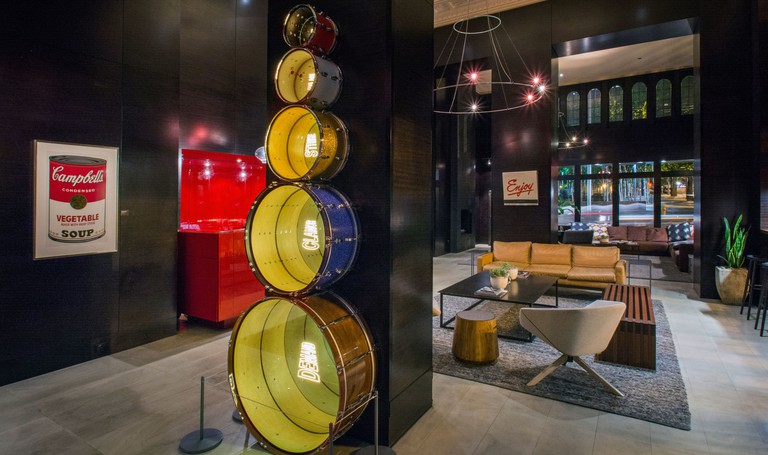 This boutique hotel is for the creative, artsy type. Hotel Max’s dedication to music and visual art is inescapable – with original works by artists such as Andy Warhol and Ed Ruscha throughout the building. One floor even highlights Sub Pop Records, with record players and vinyl collections in each room. Other amenities include Shinola bicycles to get around the city, a pillow menu, a spiritual menu (for both humans and pets) and a complimentary craft-beer happy hour. 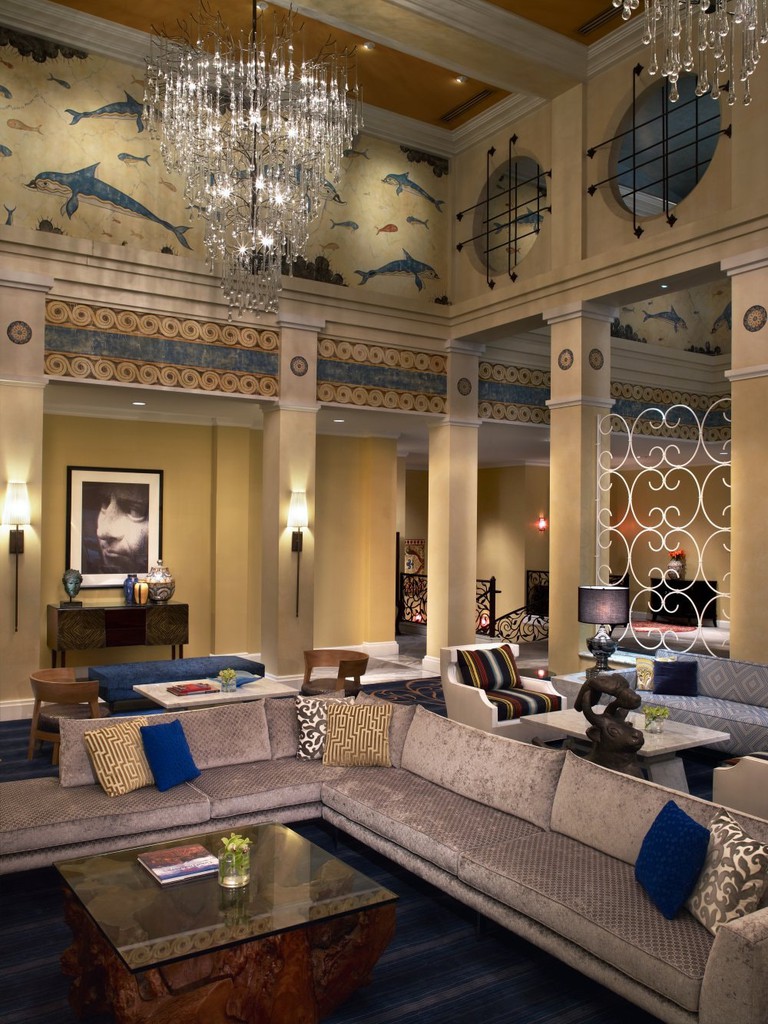 The Hotel Monaco Seattle is the largest of the Kimpton properties in the city. Dolphin murals in the lobby transition into bold patterns and bright colors in the rooms. It has all the amenities you’d expect from the Kimpton brand, including in-room yoga mats, a spa credit, complimentary bikes, a 24-hour gym and much more. You can also bring your pet along with you. 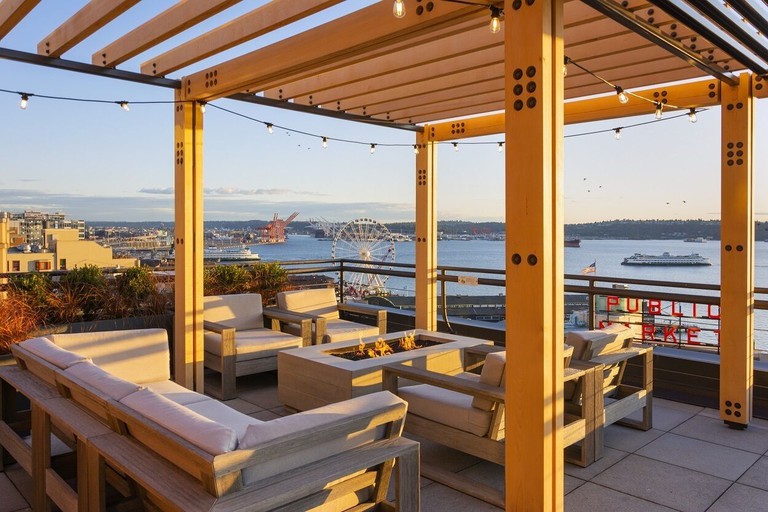 Courtesy of Inn at the Market / Expedia

One of the best luxury hotels in Seattle, the Inn at the Market has 79 rooms offering floor-to-ceiling bay windows, complete with panoramas of Puget Sound and the Olympic Mountains. Want a better view of Elliott Bay and Downtown Seattle? You can make your way to its rooftop deck for a glass of Pacific Northwest wine at sunset. As the only hotel located in Pike Place Market, you’ll have access to excellent dining options, including fresh sushi from chef Shiro Kashiba and French classics, such as steak frites, at Café Campagne.

The Maxwell Hotel – A Staypineapple Hotel 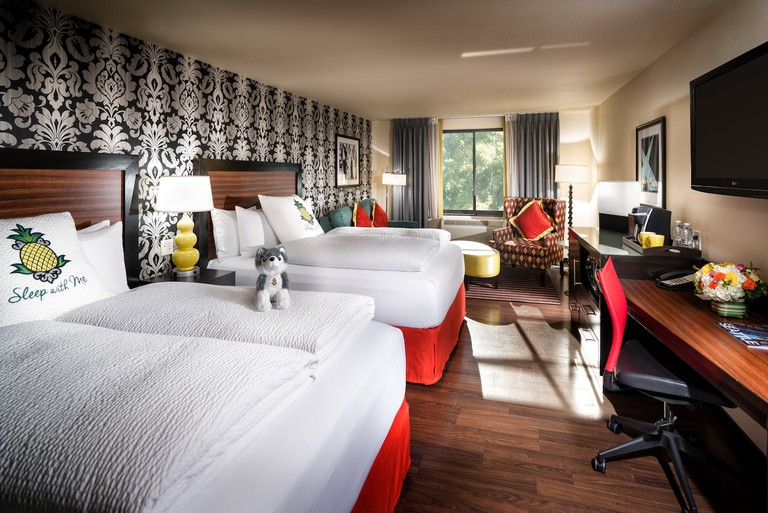 Courtesy of The Maxwell Hotel / Expedia

Anyone who stays at the Maxwell Hotel will be sure to enjoy the fitness center, indoor pool and craft beer from the Pineapple Quick Bites bar. As one of the Staypineapple Hotels, the Maxwell offers a bicycle checkout program, a shuttle service to connect you with some of Seattle’s most popular attractions and the Naked Experience. Including slippers, robes, towels, pillows and bedding, everything that touches you is soft, fluffy and fresh – so you can be, well, naked. 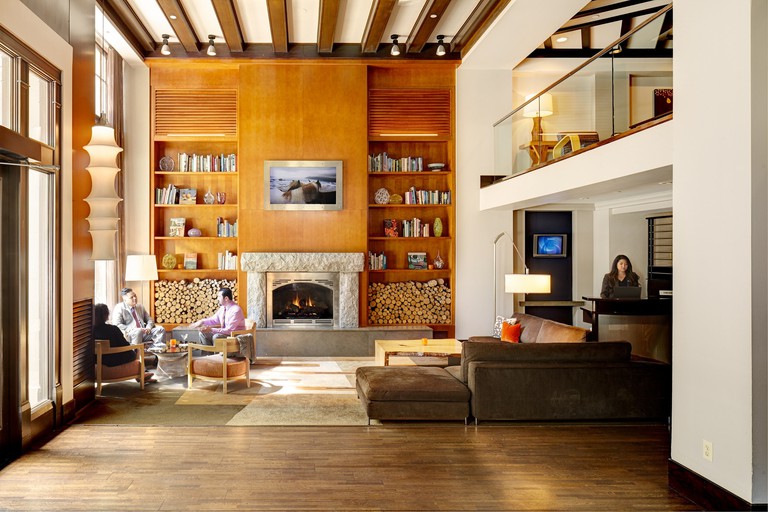 Hotel Ändra flourishes in the Pacific Northwest while honoring the area’s Nordic heritage. Using local materials, the hotel boasts Scandinavian design across its 119 rooms. It offers a fitness center, valet parking and pet-friendly touches, including a welcome pack with a bowl, mat and blanket. The icing on the cake? Chef Tom Douglas serves up Greek-Mediterranean delicacies at his on-site restaurant Lola; its brunch has been named one of the best in Seattle. 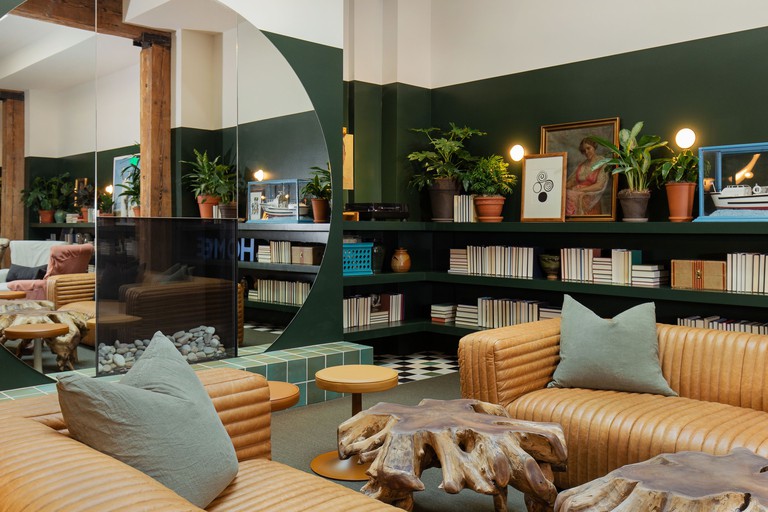 The stack of vintage luggage in the lobby lets you know that wandering souls will find a home in the Palihotel. After settling into your room, you can enjoy hand-picked tunes from the Pali Vibes playlist while snacking on something from the retro Smeg fridge. When it’s time to explore, Pike Place Market is nearby, as is the Seattle Waterfront. 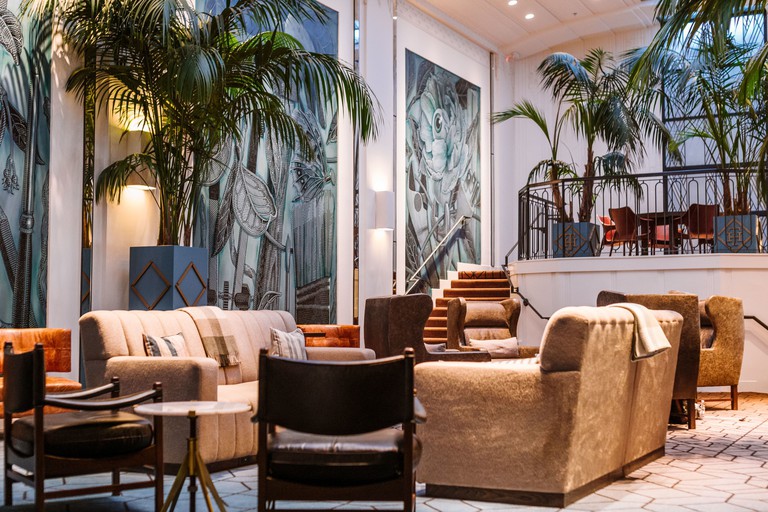 This downtown art deco landmark opened in 1930 and remained one of the tallest buildings in the city for decades. Now totally refreshed, the hotel continues to honor its history, from lobby art curated by a top local museum to the red neon Hotel Roosevelt sign on the roof, nodding to the original name. The signature room, the Seattle Made Suite, features decor inspired by the water and forests of the Pacific Northwest, plus a collection of work by local artists and designers. 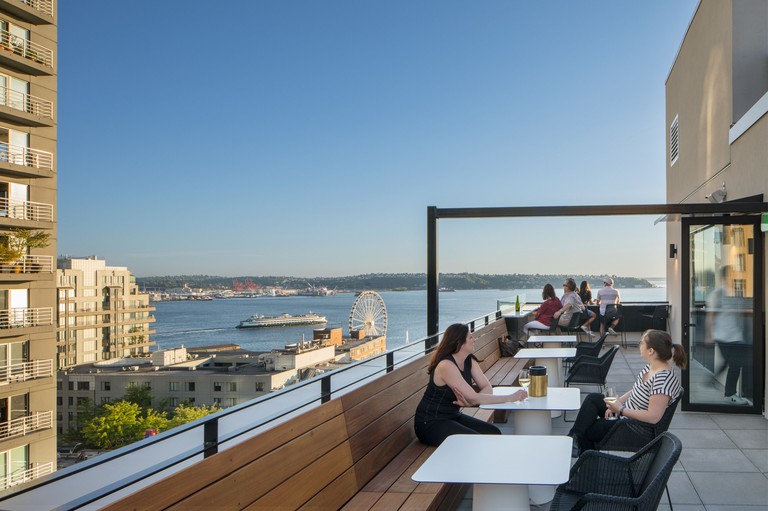 Courtesy of The State Hotel / Expedia

With an excellent location just steps from Pike Place Market and the Seattle Waterfront, the State Hotel arrived in 2019 with a splashy five-story mural by renowned street artist Shepard Fairey. Creativity abounds, from the cocktail menu at Ben Paris restaurant to whimsical wallpapers throughout the hotel. You can catch a memorable sunset over Puget Sound from the guests-only roof deck, then stroll down the block to hear jazz at the Triple Door or catch improv comedy at Unexpected Productions. 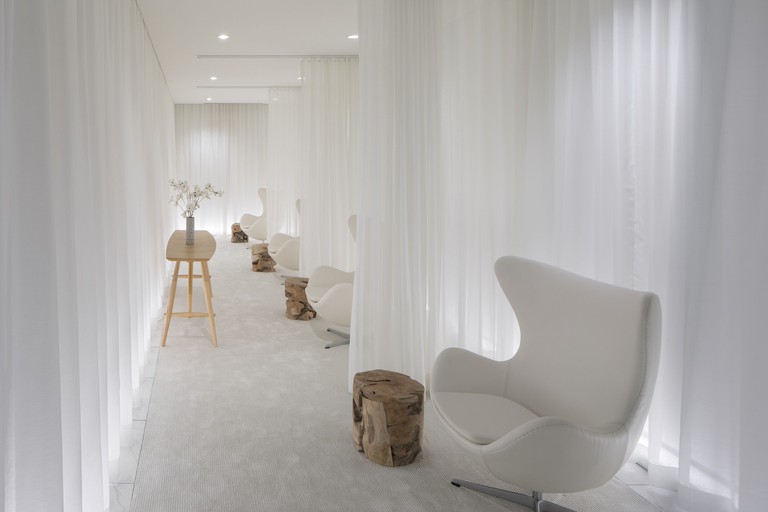 Set in the bottom third of the angular F5 Tower skyscraper, Lotte Hotel offers calm and comfort in this bustling city. Here, you can enjoy views of Downtown Seattle and Elliott Bay from the floor-to-ceiling windows in your luxe guestroom and get pampered at Le Spa de L’Hôtel Lotte. Afterward, you can visit the speakeasy atop the Smith Tower in Pioneer Square before having dinner back at the hotel.

For a budget option, see our top pick of cheap hotels in the city. Alternatively, if you fancy a dip, discover our guide to the best hotels with pools in Seattle, and book now on Culture Trip.