Sherman Alexie : The search for a Positive Native American Identity

Sherman Alexie discovered his passion for literature when faced with a personal crisis evolving from a challenging youth spent on the Spokane Indian Reservation in Washington. Vincent Wood demonstrates how Alexie’s struggle has given direction to his work as an award winning writer and poet. 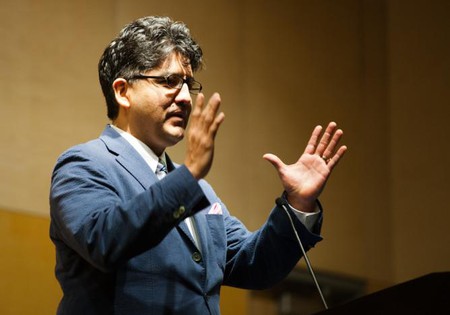 Many modern writers focus their craft on the search for an identity or loss thereof. Sherman Alexie has made this search the basis of his career. A Native American poet, writer, filmmaker and occasional comedian, most of his work revolves around what it means to be a Native American within a modern day context.

Alexie was born on October 7, 1966 on the Spokane Indian Reservation in Wellpinit, Washington. At birth his head was abnormally large due to the condition hydrocephalus, which causes unhealthy amounts of cerebral fluid to remain in the cranial cavity. He underwent surgery when he was just six months old and was not expected to survive. In the chance that he did live, he was expected to suffer from permanent mental disabilities. Miraculously, the surgery was a success and he sustained no damage to his mental faculties. Yet he suffered from seizures and bedwetting until the age of seven, and was bullied by other children on the reservation because of the size of his head. His turbulent childhood years were compounded with his father, an alcoholic who often disappeared from the household for days at a time. Despite these early difficulties, the young Alexie excelled academically.

In an attempt to better his education, Alexie left the reserve to attend a Roman Catholic high school in Spokane. Here he was so successful in his studies that he won a scholarship to Gonzaga University in 1985. Alexie enrolled in a pre-med program there, where he had hopes of becoming a doctor. When he became squeamish he switched to law, although this too would prove unsuitable. After his success in high school, he found the pressure to succeed at college overwhelming and, like his father before him, turned to alcohol. Disillusioned and confused, the only solace he found was in his University literature classes.

In 1987 he dropped out of Gonzaga and enrolled in a creative writing course at Washington State University (WSU) taught by respected Chinese American poet, Alex Kuo. Kuo acted as a mentor to Alexie and gave him an anthology of poetry entitled songs of This Earth on Turtle’s Back by Joseph Bruchac. Reading poetry written by other Native Americans greatly inspired Alexie to produce his own writing, and by 1992 he published his first anthology, The Business of Fancydancing: Stories and Poems, with Hanging Loose Press. Enamored by the success of his first publication, Alexie stopped drinking and quit WSU just three credits short of a degree, although he was later awarded a bachelors degree from the college in 1995.

The plight of the Native American people within a predominantly white society is a common thread in Alexie’s work, as he reflects upon his own experience with the poverty, alcoholism and despair rampant within his community. Although his writing is often melancholic and filled with sadness, he balances this with pop culture references and humor in order to bridge cultural gaps and make his work accessible to a wider audience.

By 1998 Alexie had already established himself as an award winning poet and novelist, and had turned his attention to film. He broke barriers when he created Smoke Signals, a film based on his short story collection The Lone Ranger and Tonto Fistfight in Heaven. This was the first film in which the actors, director and producers were all of Native American descent, and demonstrated how long standing representations of the Native American community have come to construct the stereotypes that surround them.

Still an active writer and producer, in 2005 he became a founding board member of Longhouse Media, a non-profit organization that teaches filmmaking skills to Native American youth in an attempt to use media for cultural expression and social change. As a long time supporter of youth projects, Alexie focuses his attention on at risk Native American youths so that they may avoid the same hardships he had endured on his path to success. Alexie’s most recent work is titled Blasphemy: New and Selected Stories, which was published in 2012.