A master of contemporary photography, Lee Friedlander is known for his exploration of the American social landscape. Friedlander combines his own psyche with the chaotic, ever-changing elements of the street to convey a true urban America. We take a closer look at the artist’s life and work.

Landscapes, nudes, portraits and nature studies; Lee Friedlander has experimented with almost every subject matter since he first began taking pictures in 1948. However, the genre that runs like a thread through every phase of the artist’s work is without a doubt the “American social landscape.” Friedlander used the expression in 1963 to describe the core of his oeuvre in Contemporary Photography, a magazine that ceased publication after a few issues. The term would stick with Friedlander, however, for the rest of his career; more so, it would describe the main focus of an entire generation of American photographers.

Born in 1934, in Aberdeen, Washington, Lee Friedlander moved to Los Angeles in 1952. He studied at the Art Centre School of Design for a few semesters, but soon dropped out. The young man had been interested in photography from a young age, which explains why the courses quickly began to bore him. He moved to New York City in the mid fifties and started working as a freelance photographer. Photojournalism was at its high point, and magazines such as Life and The New York Daily News kept the assignments coming.

Friedlander was granted a Guggenheim Fellowship in 1960, 1962 and 1977. He had his first solo exhibition at the George Eastman House in 1963 and was a part of The Photographer’s Eye at the MoMA a year later. However, the most important exhibition of his early career was John Szarkowski’s landmark show New Documents in 1967. The exhibition proved a positive catalyst for Diane Arbus, Garry Winogrand and Lee Friedlander who became icons of contemporary photography over night. In the press release Szarkowski writes, “Their aim has been not to reform life but to know it. Their work betrays sympathy – almost affection – for the imperfections and the frailties of society. They like the real world, in spite of its terrors, as the source of all wonder and fascination and value.” 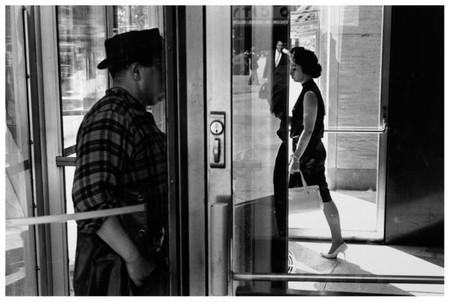 Friedlander works exclusively with black and white film, and organizes his pictures in series, which he develops over the course of several decades. He uses a Leica 35mm or a Hasselblad Superwide – two cameras that can easily be carried and pass undetected by the people on the street. Friedlander captures and documents urban city life but always with a little twist. Shop windows, architecture, cars, signs and adverts – all the classical visual elements of the street – come together in apparent randomness. Friedlander’s Father Duffy, Times Square, New York City (1974) captures the street ambiance, structure and wit that are the essence of the artist’s work.

The statue of Francis Patrick Duffy, a war hero and the most highly decorated clergyman in US history, stands proudly on Duffy Square, the northern triangle of Times Square in New York. Surrounded by a tangle of elements: modern architecture, street lamps, fences, cables and adverts, Father Duffy seems to rain over his streets with dignity. A large Coca Cola billboard towers over him from behind, allowing Friedlander to unite two American heroes in one picture. 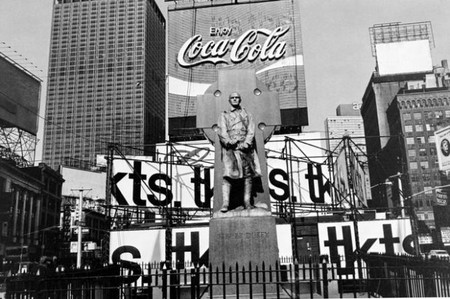 Friedlander plays with shadows, angles and obstacles which he uses to frame elements and structure his compositions. His own shadow or reflection can be found in countless pictures throughout the years. Friedlander clearly identifies himself as a part of the American life he aims to capture. Furthermore, his self-portraits underline a necessary truth of photography, more precisely un-manipulated photography: the presence of the photographer is inevitable. Different than painters or sculptures, the photographer lives what he captures. The picture is proof of what he saw and where he was.

One of the artist’s more recent projects is America by Car. It was first shown at the Fraenkel Gallery before being exhibited at the Whitney Museum in 2010. The photographs represent the modern, American version of the Tour d’Europe. Friedlander traveled across the 50 US states with rental cars, all the while photographing the landscape from behind the wheel. This angle not only presents a unique photographic perspective, but also creates astonishing reflections, repetitions and a strange kind of beauty. The project is a continuation of the artist’s devotion to the American social landscape and proves that some territory remains to be explored in this genre.

Lee Friedlander has received recognition for his work since the beginning of his career. Critics and experts speak his name among those of distinguished masters of photography. His significance was reaffirmed in 2005 and 2008, when the Museums of Modern Art in New York City and San Francisco organized a retrospective of Friedlander’s photographs.