Everything to Know About the Mima Mounds in Washington 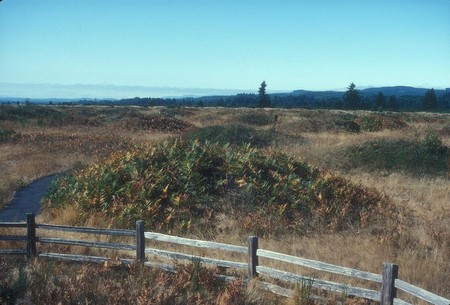 Just south of Olympia and near the Capitol State Forest sits one of the Evergreen State’s most mysterious natural wonders, the Mima Mounds.

At first glance, the Mima Mounds could be mistaken for the Teletubbies‘ famous Tubbytronic Superdome or the magical rolling Shire from Lord of the Rings. But these peculiar domes are of their own kind, and they occupy more than 445 acres of protected land in Washington State. How they came to be is an ongoing question.

Mima mounds are low, flattened, circular to oval, domelike, natural mounds that are composed of loose, unstratified, often gravelly sediment that is an overthickened A horizon. #minamounds #olympiawa #washingtonstate

The Mima Mounds got their name from the native Mima Prairie in Thurston County. And while they draw tourists from all over, these carpeted domes aren’t specific to Washington State, nor are they all labeled the same. From the hog wallow mounds in California and Oregon to the prairie mounds in New Mexico, Colorado, and Wyoming to the pimple mounds in Texas, Lousiana, Oklahoma, and Missouri to the Mima Mounds in Iowa, North Dakota, and Minnesota, these geological wonders thrive all over the United States.

Underneath the puzzling soft lumps in Washington State is a humdrum combination of A Horizon loose sediment. Their signature shape is usually around two meters high and can be anywhere from three all the way up to 50 meters wide. Theories on the origins of the Mima Mounds span far and wide. Over the years, scientists and observers pointed to small rodents like pocket gophers, seismic earthquakes—as Washington State is part of the destructive Ring of Fire—and even extraterrestrial involvement. But after a number of earthquakes and further investigation, none of these theories hold up. The Mima Mounds date back thousands and thousands of years and despite advancing technology, they continue to be a mystery today.

Situated in the Mima Mounds Natural Area Preserve, the Mima Mounds are both kid-friendly and wheelchair accessible. That, combined with the land’s low elevation gain, makes the Mima Mounds a perfect year-round destination for everyone, though the Washington Trail Association suggests visiting during Spring over any other season because camas and other wildflowers blanket the strange lumps. The land offers a couple of small looped trails stretching no more than three miles. And on a clear day, these trails provide views of the majestic Mount Rainier and Mount St. Helens. The Mima Mounds are a must-see geological wonder.