The 10 Best Restaurants In Seattle 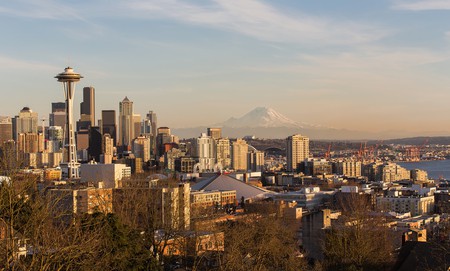 Seattle has a reputation for its thriving artisanal dining scene, one which brings together local ingredients from both Washington State’s bays and inlets as well as the farms around the city. This local, ethical produce is celebrated in Seattle’s bars and restaurants, here we’ve listed the 10 best in the city. 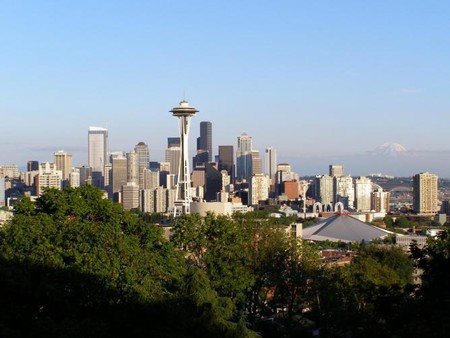 This Capitol Hill restaurant is owned by former Herb farm expert Jerry Traunfeld and brings a new style of dining to the Northwest. Fusing the Indian culinary tradition of thali (a platter featuring a variety of small dishes) with an enduring love of local and seasonal ingredients. With particular emphasis on the fresh herbs and spices, the result is a modern Northwest tasting menu that is served all at once. One thali will stretch to two people, but hearty eaters should add an appetizer or two. The salt cod fritters served with smoked paprika aioli along with the eggplant fries are particularly delicious. Pastry chef Matt Bumpas concocts the most flavorsome sweet thali; with combinations of chocolate caramel truffles and butter squares, she challenges Traunfeld’s inventiveness with winning combinations of sweet delights. The interior is urban-contemporary chic, with close tables, exposed brick walls, and simple Scandinavian-style design. 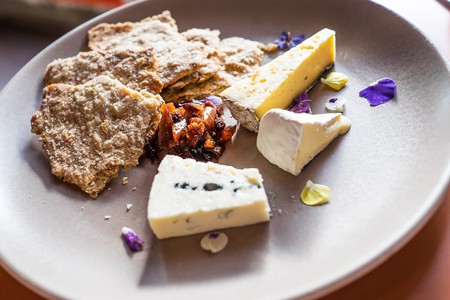 Elliott’s Oyster House delights Seattleite’s palates with impeccably fresh seafood. As the name suggests, oysters are the official reason to dine here with over 25 varieties on offer. They even offer an Oyster Happy Hour Monday through to Friday, where you can get to know your Northwest oysters as the price steadily rises throughout the afternoon. Even if oysters aren’t your bag, don’t miss out on the Elliott’s experience. Salmon and Dungeness crab are house specialties and are offered in several different preparations ensuring a delicacy for every taste. Elliott’s has earned a national reputation for their meals while maintaining sustainable sourcing of their seafood and produce. Located on Pier 56, the vibrant waterfront location is the perfect setting to breathe in some ocean air, and relax on the deck whilst soaking up the view. 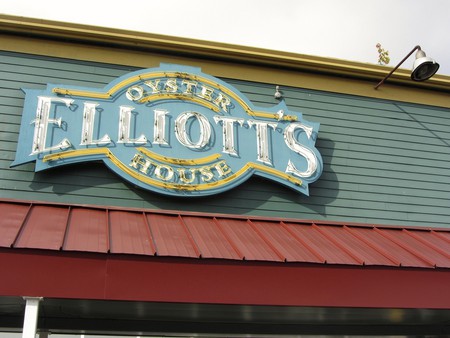 Located five hundred feet above Seattle, Skycity offers the best 360-degree panoramic views of the city. The restaurant is just below the observation deck at the top of Seattle’s famous Space Needle and both the elevator ride and Observation Deck visit are complimentary when dining at Skycity. The rotating restaurant’s culinary team uses Northwest-grown beef, produce from local farmers, and fresh, wild-caught seafood from the abundant waters of the Pacific Northwest to create some of the most creative cuisine Seattle has to offer. The views encompassing the city skyline, Mount Rainier, and the Olympic Mountains are the perfect accompaniment to the fabulous food. For drinks, the award winning wine list offers an extensive range of wines, with a high percentage sourced locally from Washington State. 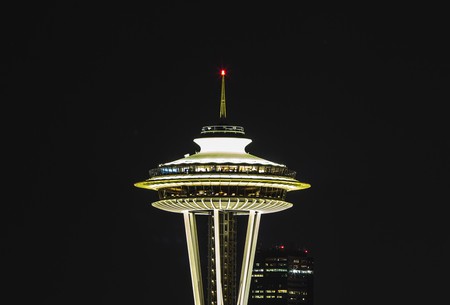 Situated in Downtown Seattle across the street from Benaroya Hall, Wild Ginger is the perfect choice for a pre-symphony dinner. Offering some of the most authentic tasting Asian street food within an upscale setting, the restaurant has been a Seattle favorite for many years. Dishes include specialties from Malaysia, India, Thailand, Vietnam, China and beyond. The skewers served are particularly spectacular, with everything from chicken to scallops, prawns and lamb being served on a stick with a small cube of sticky rice. Siam lettuce cups offer clean flavors of slightly grilled fish, roasted peanuts, lime juice and tamarind, wrapped in a crisp lettuce leaf and folded with fresh Thai basil and dill. For after dinner dancing, be sure to check out Triple Door, a great live-music club located directly downstairs from the restaurant. 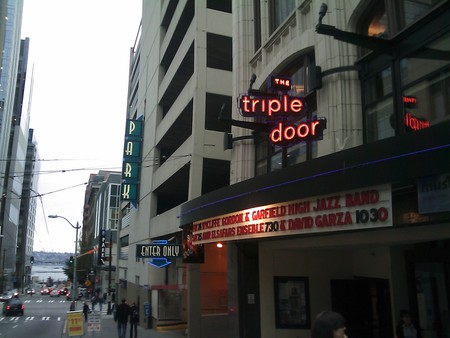 Wild Ginger is located above The Triple Door | © Joe Szilagyi/Flickr

Art of the Table

Art of the Table is an intimate dining establishment located in the Wallingford neighborhood of Seattle. It is a self-proclaimed ‘celebration of food and the people who dedicate their lives to the art of making it, raising it, growing it, foraging it, catching it.’ Working directly with the local fishermen, farmers, artisans and ranchers from Seattle, their goal is to source the best foodstuffs possible to create their daily-changing menus. A must is the chef’s menu: a carefully crafted menu which pairs the fresh food with wines or beers for the most balanced dining experience. On Thursday, Friday and Saturday evenings, chef-proprietor Dustin Ronspies hosts a Supper Club, a single seating four-course prix-fixed menu that changes weekly. With just 20 seats available, this intimate experience feels like a personal dinner party. On the Supper Club nights, Ronspies introduces each course, crediting the local growers who have supplied the ingredients.

Many Seattleites have come to call Bakery Nouveau their favorite stop for a coffee and a croissant in the whole of the city. Located in the west of Seattle, William and Heather Leaman continue to make history daily with their unique creations. With over 20 years experience in pastry, bread, and chocolate, the Leamans are quickly making Bakery Nouveau into a Seattle icon. William Leaman was even a member of the Bread Bakers Guild Team USA when it won the Coupe du Monde de la Boulangerie award (World Cup of Baking). Bakery Nouveau’s specialty is a twice-baked croissant in a variety of different flavors. With an unimaginable range of fruit tarts, cakes, quiches, macaroons, and pastries, you’ll be spoilt for choice. They even have a case displaying carefully crafted chocolates. If you can’t make it for breakfast, an array of French sandwiches is available to purchase for lunch. Located opposite a beautiful park, it’s the perfect place to indulge your sweet tooth on a pleasant Seattle day. 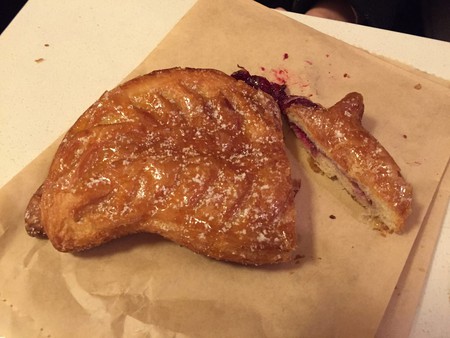 Bringing the Big Easy to Seattle is Toulouse Petit, a New Orleans-inspired restaurant offering the best in Louisiana cuisine and an astounding cocktail list. The hugely popular happy hours keep the place packed throughout the night and create a great energy and vibe in which to spend your evening. Toulouse Petit offers you a taste of the South anytime of the day. While the menus have some overlap, each offers an overwhelming array of choices, with a staggering choice of over sixty dishes to choose from. Specialties include breaded and fried alligator, ‘fried oyster po’ boy’, whole gulf shrimp over grits and Louisiana blue crab over fried-green tomatoes. Located in the Lower Queen Anne district, in between the intersection of Queen Anne Avenue and Mercer, Toulouse Petit is right in the middle of the action. 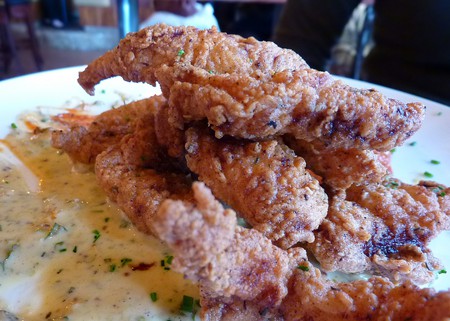 Located just two blocks from Seattle’s waterfront, Canlis offers remarkable views over the Lake Union and has built a reputation for itself since 1950 as being one of the top restaurants to experience in the city. Praised by many local and national media outlets such as the Seattle Magazine, The Wall Street Journal and Seattle Metropolitan magazine, Canlis has received much critical acclaim. This family owned restaurant has a menu that is centered on seasonal Pacific Northwest seafood and produce. Chef Brady Williams puts lots of consideration and care into even the smallest dish, resulting in the largest flavors. Menu items include oysters, dry-aged duck, wagyu, steak tartare and much more.
The stylish interior mixes contemporary decor with Asian antiques and Continental influences, keeping both traditionalist and more adventurous diners happy.

Matt’s in the Market

Matt’s in the Market is a restaurant that celebrates Seattle’s Pike Place Market daily as both a prime source of ingredients as well as inspiration. The restaurant is situated on the third floor of the Corner Market Building, facing the big neon clock that is the quintessential symbol of the market. Matt Jancke founded the restaurant in 1996, and over the years it has grown into a hugely successful restaurant with a fiercely loyal clientele, who are drawn in from Pike Place Market by the imaginative cuisine on offer. Overlooking Elliott Bay, owner Dan Bugge has made some big renovations since the restaurant’s humble beginnings. With this new spacious alternative, you can expect to find the same welcoming service and delicious food, which honors the changing seasons and stock of the market. Interesting and innovative choices are always on offers, such as the seafood stew, goeduck with seasonal accompaniments and fried duck egg salad. 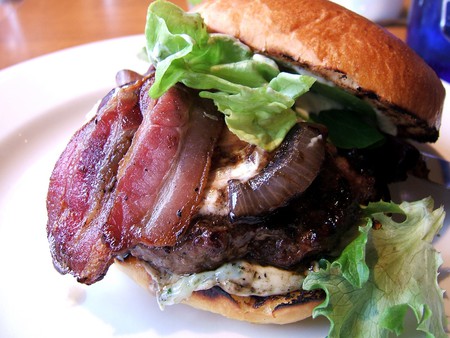 Located moments away from Sea-Tac Airport, the eco-friendly Cedarbrook Lodge hosts one of the finest restaurants in Seattle. The cosy Copperleaf Restaurant nestled inside the accommodation offers incredible food, whilst the Copperleaf Bar offers a vast wine selection featuring many bottles from many well known Pacific Northwest vineyards.Ambiancee is of high importance here, with a roaring fireplace, large leather loungers and floor to ceiling windows offering spectacular visions of the reclaimed wetlands and forest that lay outside. The seven course tasting menu with Washington wine pairings is guaranteed to keep your senses seduced for hours. Favourites include the Olive Oil Poached King Salmon with white sturgeon caviar and Shellfish Clam Chowder with roasted garlic and thyme toast. If you have room for dessert, Copperleaf offers doughnuts with Theo’s Chocolate, a typical Seattle staple ensuring a true taste of the city.