A Tour of Seattle’s Postmodern Landmarks 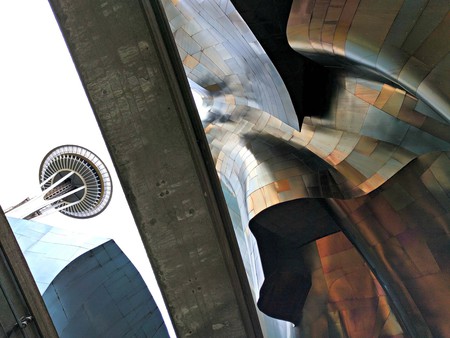 Though the Emerald City has always respected its history, it’s still a city constantly moving forward, nodding gratefully to its heritage with its eyes firmly fixed on the future. It is no surprise, then, to find progressive aspects in the city’s buildings, from their green practices to their very design.

Indeed, Seattle’s most iconic building, the Space Needle, was built for the 1962 World Fair to represent the future of science and technology. Since then, the 1960s brought forth the emerging postmodern architectural style. Flourishing in the ’80s and ’90s, postmodernism began to divide around Y2K into sub-styles such as deconstructivism.

Chasing after the Columbia Center, 1201 3rd Avenue became the city’s second tallest building when erected between 1986 and 1988. The Brooklyn Building, completed almost 100 years prior in 1890 in the current location of the future skyscraper, boasted the City of Seattle Historic Landmark Status. However, this status technically only applied to the building’s north and west walls. With the designers taking advantage of this technicality, the rest of it was gutted to make way for what would become Seattle’s first postmodern high-rise building. The new building not only included two of the Brooklyn Building’s original walls but also incorporated the old building’s style into the new design. Rising in sheet metal, the glass façade is sleek in contrast to its more classical elements. 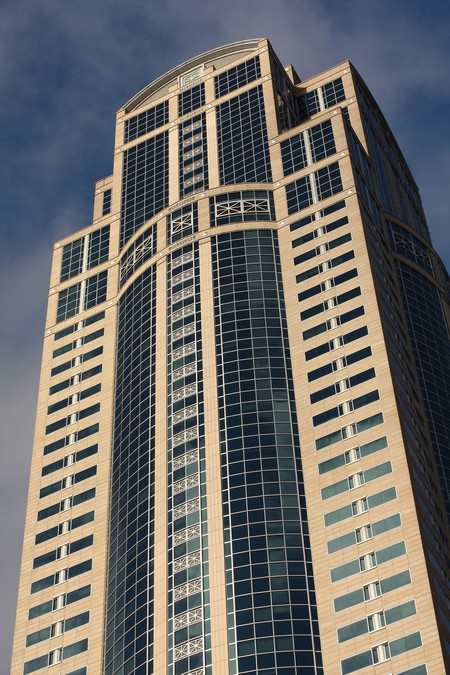 Though the Seattle Art Museum (SAM) has been around since 1933, it wasn’t always in its current building. With the museum in need of a new home, Robert Venturi was given the task of designing a new structure, which is subtly colorful on the outside with a limestone façade, pink granite, and red sandstone. The terra cotta, which connects the new building, built in 1991, to its older neighbors, clashes against the more modern metal and glass protruding from the top. The context of the structure was vastly considered in its design, from the grand staircase that connects the entrance from the bottom of the hill to the entrance at the top, while still displaying art along the way, to the galleries that vary in design—just like the art exhibited within. 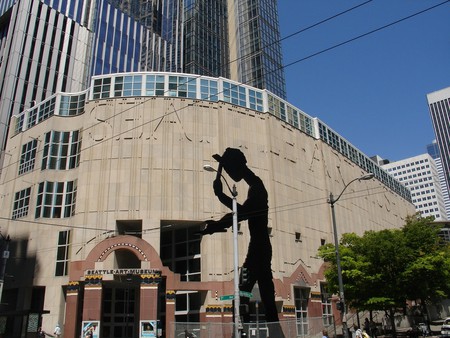 From the private sector, postmodern architecture found its way into the public sector. Seattle’s City Hall, built in 2003, was designed to illustrate the government’s transparency with an open lobby layout while embracing the sleek glass-and-steel style in contrast with terraced stone forms. The building, with a blue glass bridge connecting the council chamber and offices, brought to the forefront an increasing amount of asymmetry. 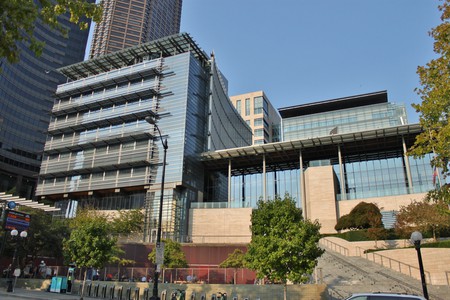 The postmodern derivative of deconstructivism (which seems like an ironic term for designing a building) emerged in structures such as the Museum of Pop Culture, or MoPOP (formerly the Experience Music Project, or EMP), and Seattle’s Central Library.

MoPOP, built in 2000, is a complex barrage of asymmetry and color. Designed in the context of music, Frank Gehry took inspiration from slices of electric guitars. The painted aluminum shingles and shaped stainless steel that change colors in various light conditions are said to represent the constant evolution of culture. 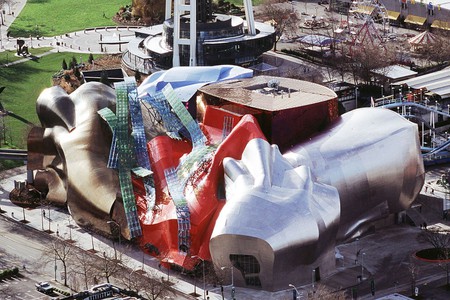 The complexly asymmetrical and oblique design of the Seattle Central Library appears chaotic; however, in reality, the building was designed around its intended function—instead of its function being fit to the building’s design. The glass exterior was intentionally chosen to increase natural light in south-facing rooms and, for example, decrease glare in the north-facing reading room. A Books Spiral makes up floors six through nine, facilitating the Dewey Decimal system in the non-fiction section of the library with a constantly evolving ribbon of gradually increasing ramps; the entire section is united, instead of being broken up by stairs or separate sections. 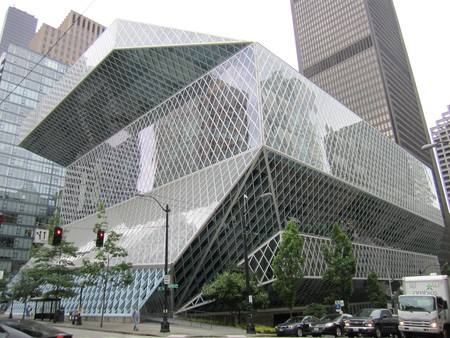