A Look Inside the Gospodor Monument Park 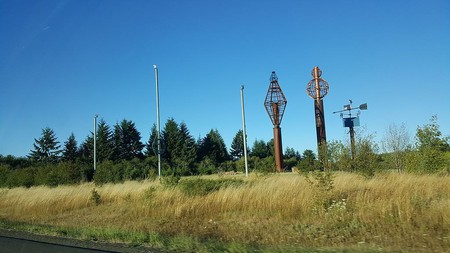 A number of tourist oddities litter Interstate 5, the West Coast highway that stretches all the way from Canada to Mexico. And while many sites witness a number of tourists every year, one Washington State attraction doesn’t.

The Gospodor Monument Park is easy to overlook as cars zip along the highway at 70 miles an hour. It sits in a vacant field between Toledo and Winlock, directly off of I5, emitting an air of abandonment, with three thick rustic poles with cryptic sculptures perched atop. At a quick glance, it’s hard to decipher what the tall structures represent and by the time drivers notice the landmark running parallel to them, the site has already vanished, which is why there are so few decent pictures of it out there.

But despite its deteriorated look, the Gospodor Monument Park is, in fact, a roadside attraction, with a weird history too.

Dominic Gospodor was a Seattle entrepreneur who made his fortune in real estate and oil pipeline construction. In his old age, Gospodor decided to put his funds to use and build landmarks, for reasons unknown, honoring Mother Teresa, Native Americans, and victims of the Holocaust. The plan was to erect them near that Seattle Space Needle, at the Sacred Heart Catholic Church, but of course, that didn’t fly with locals or the Archdioceses.

After a small series of trials and failures, Gospodor took control and purchased his own land in 2000 in Lewis County, where the monuments currently stand, and the building commenced.

Dominic Gospodor, the eccentric bachelor who spent over $1 million building the Gospodor Monuments, has died at age 86. He never told anyone why he built them, or exactly what he meant to say with their peculiar combination of Mother Teresa, Native Americans, Jesus, Holocaust victims, an eagle, and an enormous weather vane. Mr. Gospodor reportedly wrote in his will that upon his death a nonprofit organization had to be found to take over ownership of the monuments. But he also reportedly left no money to maintain them, or even to pay for the electricity that lights them at night. The monument pylons are made of structural steel, however, and should be around for a while. – See more at: http://www.roadsideamerica.com/tip/7757#sthash.ksokW53d.dpuf

The pillars are all made from unflattering steel pipes, the tallest of which stands at 100 feet. It holds a gold-painted, wooden statue of Jesus with his hands splayed atop two globes. To its left is a statue of Chief Seattle, also gold-painted and wooden. And to Jesus’ right sits a stout cage representing Holocaust victims. And while the statue of Jesus honors Mother Theresa, there’s an actual sculpture of her standing at the monument’s base. Visitors have to physically visit the site in order to see it.

Mirroring its troubled beginning, the project hit controversy again. The Washington State Patrol and drivers declared that the statues were hazardous, locals claimed that they were less than appealing, visitors complained about the lack of bathroom facilities, and many people questioned the meaning of their existence, but Gospodor plugged along until the project was complete.

Man down! I think it's Jesus #roadtrip #pacificnorthwest #washington

Gospodor passed away in 2010, but not before suggesting a few more additions to the park. Specifically, monuments honoring Susan B. Anthony, DUI victims, Lewis and Clark, William Seward, and others. Those didn’t happen though, and in 2012, the Cowlitz Tribe gained ownership. Unfortunately, Gospodor didn’t leave the Cowlitz Tribe any money to care for the site. In early 2015, a windstorm swept through the area, knocking over the statue of Jesus, adding to the already deteriorating mess.

What will become of the Gospodor Monument Park? Who knows. After the windstorm, the Cowlitz Tribe handed the fallen monument over the city for preservation and Toledo locals came together to find a way to maintain the unique landmark. But since 2015, there’s been little to no news on the status of the monuments.