12 Epic Places in Seattle That Locals Don’t Know About 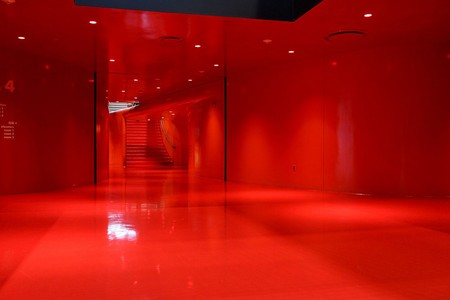 Surrounded by both the Olympic and Cascade mountains, covered in evergreen forestry, and atop the Puget Sound, Seattle is one of the West Coast’s most beautiful cities. It offers a variety of outdoor, arts and entertainment activities. With so much available, it’s easy to miss out on the hidden gems. We highlight some of the best that even locals don’t know about. 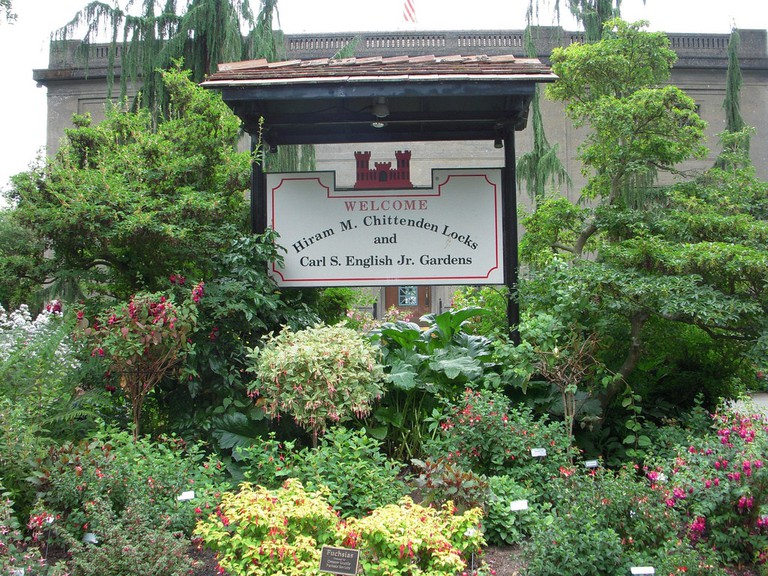 When people think of Seattle’s botanical gardens, usually the first to come to mind is Washington Park Arboretum, University of Washington’s garden located in Madison Park. But near the iconic Ballard Locks is another botanical garden that’s sure to be a plant enthusiast pleaser. With over 1,500 plant varieties and 500 species from all over, the garden features Mexican pines, rhododendrons, and palms, with its seasonal specialties being fuchsias and lilies. 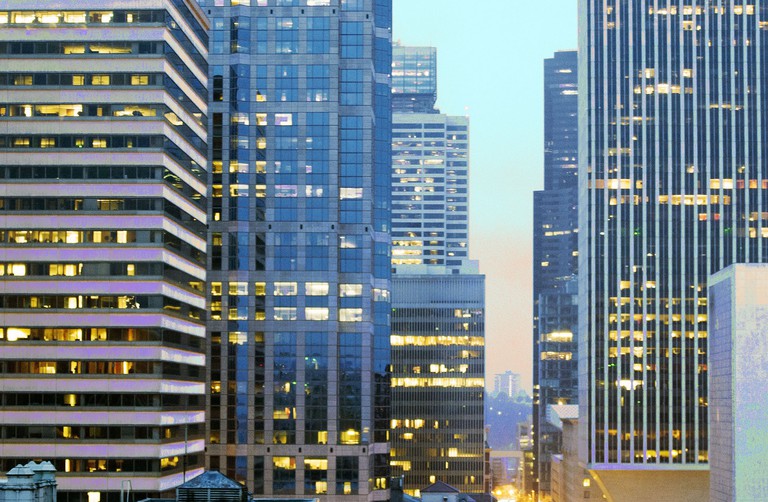 Formerly known as the IDX, the 40-story Fourth and Madison Building stands in the middle of Seattle’s downtown area. Its modern architecture blends in with its surrounding high rises, making it an easy structure to pass by. Located on the seventh floor rooftop of the privately owned building is a public garden. With views of downtown and the Puget Sound, benches, and greenery galore, this hidden gem is one of the best low-key areas to sit down and relax in. 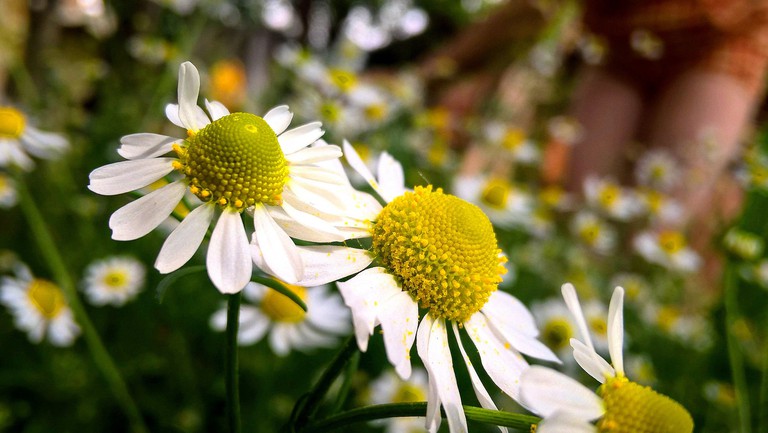 Seattle University, located in the middle of the Capitol Hill neighborhood, boasts some of the city’s best gardens. Though the university is clearly labeled to those who pass by, its insides are hidden behind large trees, bushes, and buildings. The small, private university is an intimate space with small patches of greenery tucked behind buildings and scattered throughout. The campus website provides a self-guided walking tour of the school’s lush gardens such as the Shakespeare Garden, that is rich with camomile and features many of the botanicals referenced in his work and the Healing Garden that’s full of historically medicinal plant life. This green wonderland is a Seattle must-see. 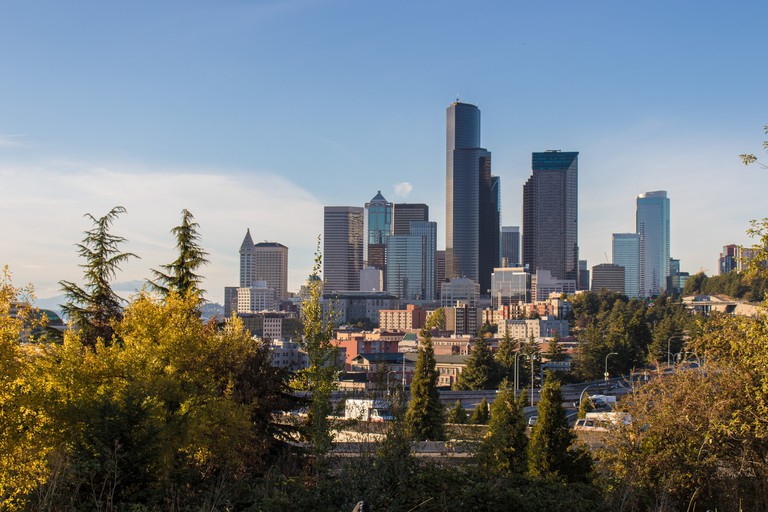 A view of Seattle from the Dr. Jose Rizal Park | © David Sprankle / Flickr

A hilly city known for its scenery and outdoor activities, it’s no wonder Seattle is overflowing in parks with beautiful views. The one-acre Kerry Park situated on Queen Anne is often the go-to destination to see the city against its surrounding mountains. But the Dr. Jose Rizal Park located in the Beacon Hill neighborhood is equally as breathtaking. Its 9.6 acres provides city views, picnic areas, and a much adored off-leash dog park. 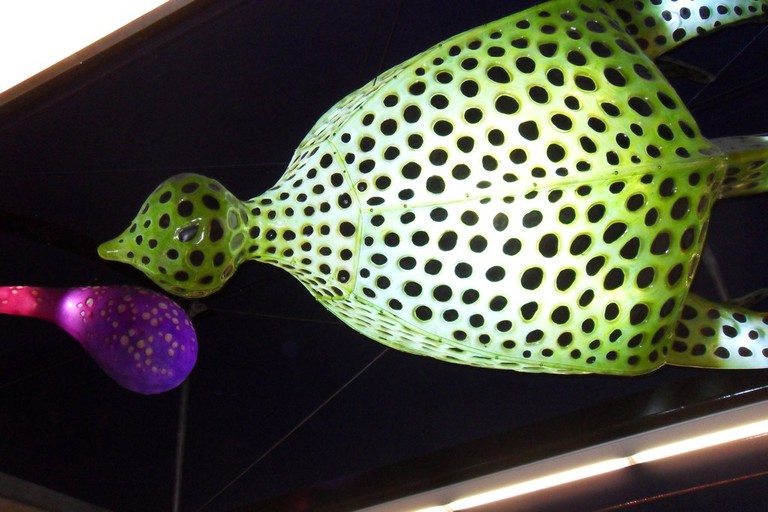 Close up of the Beacon Hill Tunnel art | © go-team/Flickr

As Seattle continues to see an increase in traffic as a result of the continual growth of the city, more people are seeking transportation solutions. Whether it’s biking, walking, or bussing, Seattle is chock-full of alternative modes and the city has made an effort to make the often lengthier commute worthwhile. For instance, the light rail station Beacon Hill Tunnel, which is filled with public art installations. As passengers make their way down to the tunnel, they’re greeted by suspended luminescent sea creatures magnified by the deep blue ceiling. Seattle artist Dan Corson created 18 of the pieces for his Space Forms project. Another project is Bill Bell’s Lightsticks installation, a series of lit playing cards that flash as the train speeds by. It may be a little harder to see, as it’s situated deeper in the tunnel and can only be sighted for 1/30 of a second, but it’s worth it. 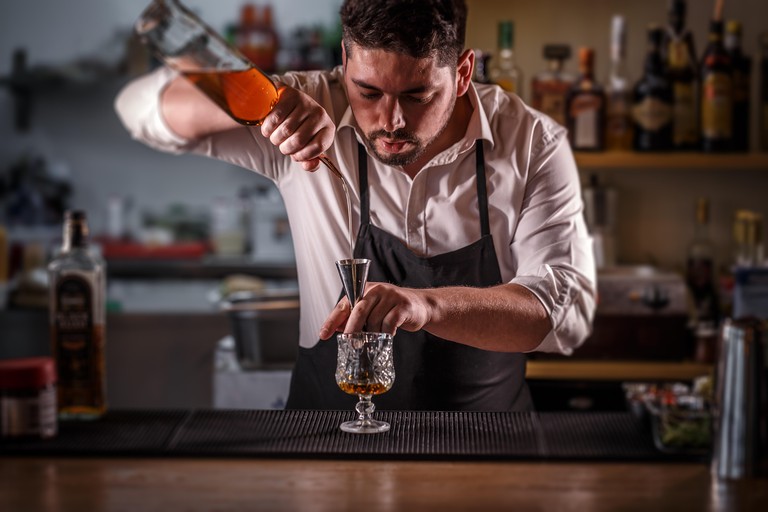 One of the many bars that occupies Seattle’s vibrant Capitol Hill neighborhood is Tavern Law, and inside that bar is another. The infamous 25-seat speakeasy Needle & Thread can only be accessed by way of an old bank vault door located upstairs above the Tavern Law restaurant. Reservations are required, which can be done via their website, and don’t expect a drink menu. The prohibition inspired cocktails are prepared as the expert bartenders see fit. Just tell them what mood you’re in and they’ll work their magic.

The Fin Project at Magnuson Park 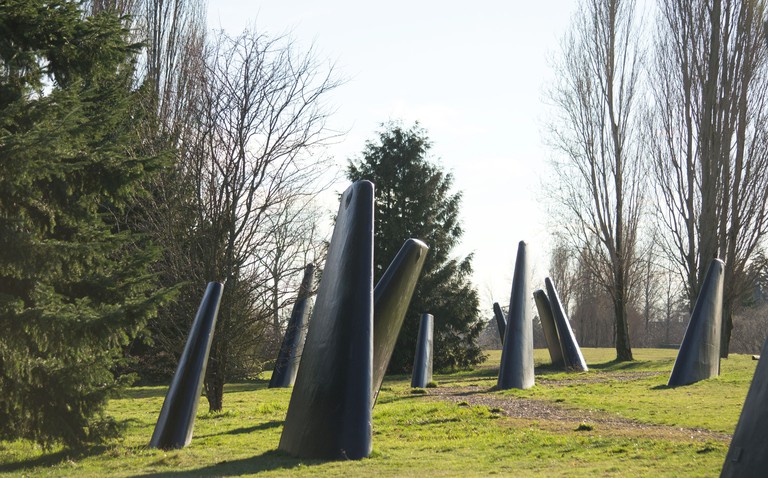 Situated in the Sand Point neighborhood of Seattle is Magnuson Park, which was once the Naval Station Puget Sound base. The 350-acre park is home to several historic structures, most notably its airplane hangars. As the second largest park in the Seattle area, it has the space to be more than just a regular neighborhood playground. On the northeast part of the peninsula is an outdoor art installation titled The Fin Project that embodies the park’s rich history. Sculptor John T Young used dive fins from former US Navy submarines built in the 1960s. Its black fins jutting out from the grassy land are a Seattle must-see. 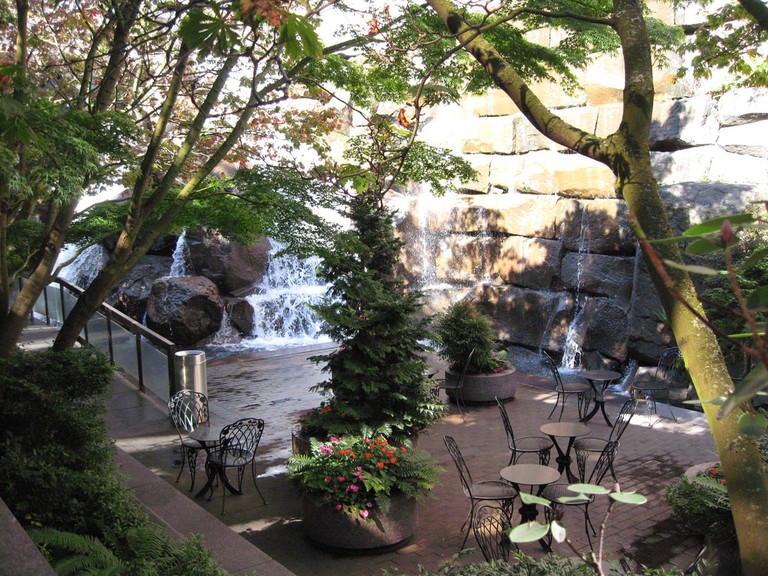 Waterfall Park | © basic_sounds / Flickr
This man-made pocket park tucked away in the Pioneer Square neighborhood dates back to 1978. The Waterfall Garden Park, sometimes referred to as the UPS Waterfall Garden Park because it was created at the original United Postal Service building, is a Japanese garden that actually won the Environmental Award of the American Nurserymens Association in 1981. The 22-foot (6.71 m) waterfall stands alongside slow-growing trees like Chamaecyparis obtusa and other native Japanese plant life. Pop in behind Occidental Square Park to read, munch on an afternoon snack, and enjoy the history humming in the air.
Open In Google Maps
219 2nd Avenue South, Pioneer Square, Seattle, Washington, 98104, USA
+12066246096
Visit Website
Give us feedback 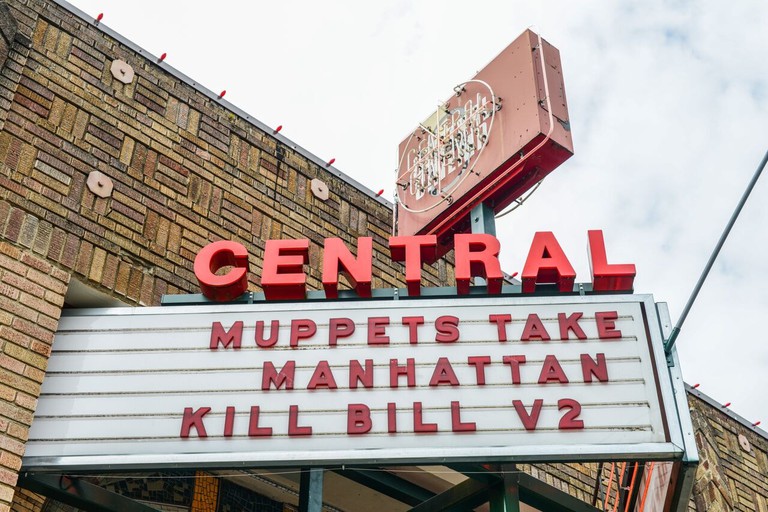 Central Cinema is a dine-in movie theater that offers everything from beer and wine to popcorn and candy to pizza and burgers. The movie theater’s program is a carefully curated mix of adored classics like The Philadelphia Story and Some Like It Hot to more recent comedies like Step Brothers and Bring It On. It’s situated on the Eastern edge of the Capitol Hill neighborhood, tucked behind a small row of shops. Its intimate location is perfect for any retro date night. 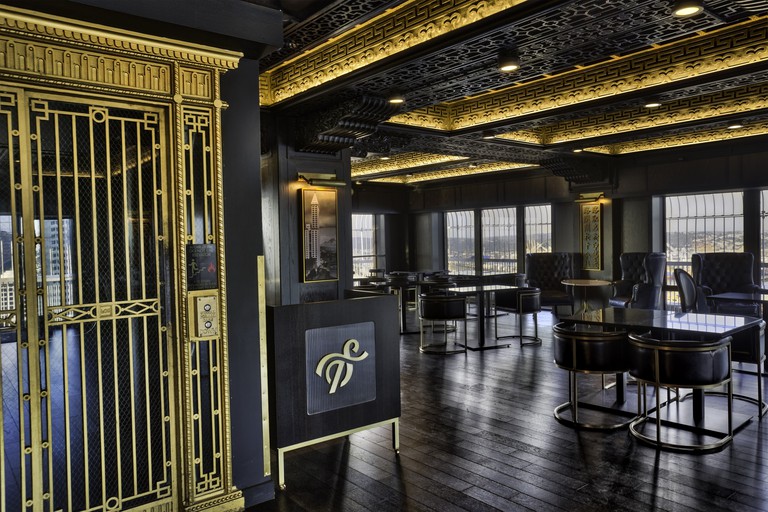 Reaching a height of 484 feet, the iconic Smith Tower is the oldest skyscraper standing in Seattle. Erected in 1914, the Smith Tower was the tallest building along the West Coast until Seattle’s 1962 World’s Fair when it was succeeded by the Space Needle. Located at the top of this landmark sits one of Seattle’s best observation decks paired with a Prohibition-era, speakeasy-themed bar that mirrors its early 20th-century architecture. Enjoy your cocktail while admiring the 360 degree views that feature Mt. Rainer, the Olympic Mountains, the Puget Sound and of course the Space Needle. 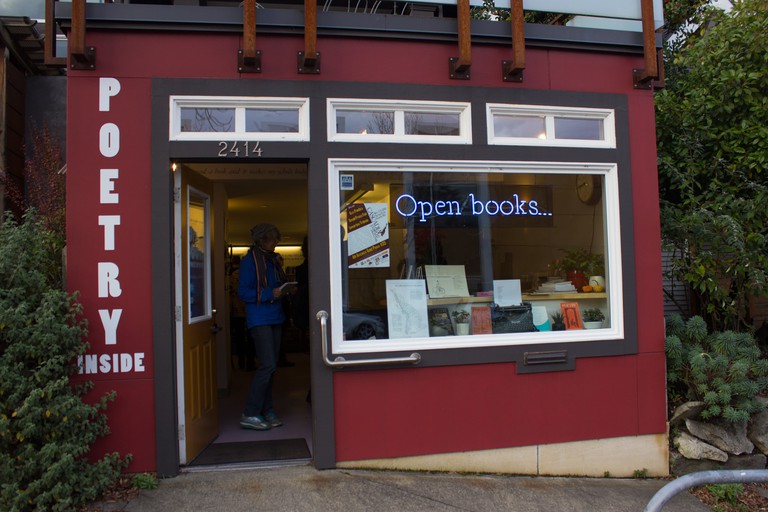 Open Books exterior | © Billie Swift / Open Books
Situated in a renovated bungalow, Open Books carries over 10,000 new, used, and out-of-print books, of or about poetry. With readings and workshops held regularly, Open Books is more than just a neighborhood bookstore, it’s a community. The 23-year-old business was sold to Billie Swift in 2016 when the original owners retired. She was a regular patron who bought the store to preserve the poetry sanctuary that had become so important to her.
Open In Google Maps
2414 North 45th Street, Wallingford, Seattle, Washington, 98103, USA
+12066330811
Visit Website
Give us feedback 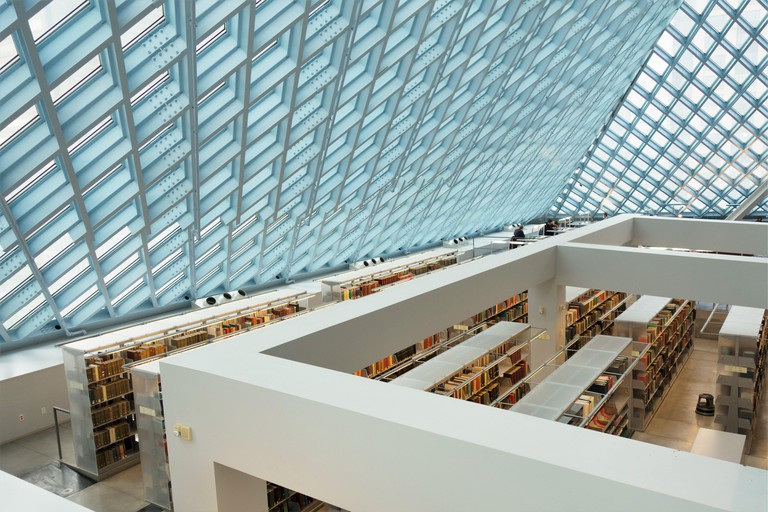 The Seattle Central Library is one of the most notable structures standing in Seattle and earned a national AIA Honor Award for Architecture in 2005. Its crumpled-paper look was designed by Rem Koolhaas and Joshua Prince-Ramus of the Office of Metropolitan Architecture meant to appreciate books in the digital age. Inside, the library features a number of colorful spaces such as the bright orange floors in the Starbucks Teen Center and the bubble gum floors of the Faye G Allen Children’s Center. One of the less frequented but nevertheless spectacular spaces in the library is the Meeting Level, or what the public has titled the ‘Red Hall.’ It’s lit dramatically, with various shades of red lining the floor, walls and ceilings of the hallway. While this may seem like an unconventional choice for an educational space, each door leads to neutral-colored study and conference room.