11 Films and TV Shows to Watch Before Visiting Seattle 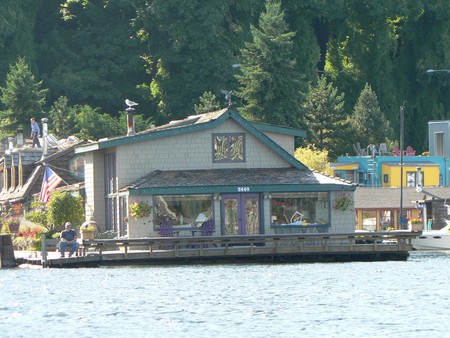 Whether a script specifically involves Seattle or there’s a need of panoramic shots of evergreens, Seattle is an popular location for films and TV shows. There are internationally known landmarks, including the Space Needle and Pike Place Market, astonishing views, and endless amounts of rain (which can be helpful for some stories). For an appropriate education in Seattle film, don’t miss these movies and TV shows before you check out the Emerald City.

What better way to start our list than with this classic? Tom Hanks and Meg Ryan are star-crossed lovers brought together by the innocent, yet brilliant intuition of a child – that and some good-timing (preceded by a lot of bad-timing). What more could you ask for? Throw in some shots of the Space Needle, Pike Place Market, and the famous Lake Union boat house, and it’s an iconic Seattle classic.

Harry and the Hendersons

A movie about Bigfoot… of course it would take place in the Evergreen State! The Hendersons live in Wallingford and meet Sasquatch, the infamously elusive huge, hairy, biped. Shot in the Wenatchee National Forest and the North Cascades National Park in addition to Seattle proper, this fun ’80s movie brings to life the fiction created by people who spend too much time alone in the woods (also known as the real-life creature that cynics are too stubborn to acknowledge).

Based on the actual 1999 Seattle World Trade Organization protests, this film from 2007 stars Channing Tatum and Charlize Theron. Chronicling the citizens’ gathering of tens of thousands of individuals from student groups, labor unions, non-government organizations, and anarchists, this movie is a great peek into the activism that defines the city of Seattle.

Like many films and TV shows, Grey’s Anatomy isn’t actually shot where the story is set. Of course the views of the skyline with the iconic Space Needle are real, but everything else is shot in Los Angeles. The concept of the hospital is, however, based on the Harborview Medical Center on First Hill. Plus, Meredith Grey’s house is located in the Queen Anne neighborhood. For the first time in the series, the cast actually traveled to shoot the TV show in Seattle during summer 2017. The shots are scattered across season 14.

This classic coming-of-age story is set in Seattle, but the city is only alluded to very briefly. There are no obvious landmarks, just some familiar streets if you know what they looked like in the 1980s, a drive-by of Bob’s Java Jive (a local landmark that’s actually in Tacoma), and a brief mention of Bell Square (one of the most popular malls on the Eastside of Lake Washington). There really is no better place for your typical John-Cusack-pining-over-a-girl-in-a-downpour than a city as famous for its rain as Seattle.

An Officer and a Gentleman

This movie, staring Richard Gere as a bad boy (involuntary swoon), takes advantage of arguably Washington State’s two most picturesque locations: Seattle and the Olympic Peninsula. Though shots of the city are included, the majority takes place in Port Townsend and Bremerton, by the Olympic Mountains and the Olympic National Forest – those miles of evergreens that can seem surreal in today’s metropolis-focused society. You can even stay at the “The Officer and a Gentleman Suite” at the Tides Inn!

10 Things I Hate About You

This movie is almost as iconic as the Seattle landmarks it shows off! Starting with shots of the famous skyline in the title sequence, the movie goes on to feature a school that actually exists in Tacoma. Then, there’s the unforgettable paintball fight at Gas Works Park and Cameron’s conversation with Bianca in front of the Fremont Troll. 10 Things I Hate About You features many of the top things we love about Seattle.

Let’s take a look at an even younger Seattle: in the 1970s. John Wayne stars as McQ, “the cop nobody can stop”. This movie has shots all over the less developed Seattle of ’74, including scenes at Key Arena (previously the Coliseum) and Harborview Medical Center. There’s a party across Lake Washington at a mansion in Medina – the neighborhood Bill Gates inhabits. Then, of course, back to the scenic Olympic Peninsula for the final car chase.

Another TV show that famously faked the Seattle set, Frasier celebrated its 100th episode by actually traveling to Seattle to film on location. For intelligently crafted jokes artfully weaved into the timelessness of slapstick, check out the story of this therapist with his own radio talk show and enough family drama to drive him crazier than his patients.

Singles is like a time capsule, taking place in Seattle as grunge came to the forefront of nationwide culture. Released only a year after Nirvana made it to #1 on the Billboard’s Alternative Songs chart and two years before Soundgarden garnered commercial success, Singles features original music by Pearl Jam, Alice in Chains, and Soundgarden. This movie, about several singles living in the same building, features one of Seattle’s most stereotypical moments in time, with its fashion, culture and music.

It Happened at the World’s Fair

From 1963, a year after Seattle hosted the World’s Fair, comes a movie starring the King. Set at the location of the tallest building West of the Mississippi at the time, with the world’s first revolving restaurant, the filmed-on-location set of the movie was practically as exciting as Elvis himself! For a classic soundtrack and views of Seattle just after the Space Needle was erected, don’t miss It Happened at the World’s Fair.