Why You Must Visit The JFK Center For The Performing Arts In D.C. 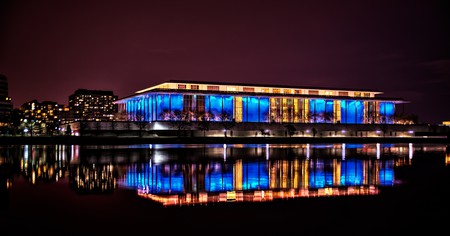 Approximately 8,000 people shuffle through the magnificent halls of the Kennedy Center each day. Maybe they will catch the National Symphony Orchestra, or a beautifully choreographed ballet performance. Even if there’s no performance to see, a tour of the grand building makes for a worthwhile trip. While the center houses cultural performances, the building itself is also a unique artistic display – the perfect memorial to a president who valued the arts above all else.

The Kennedy Center is the busiest performing arts center in the nation, hosting approximately 2,000 performances each year. The center presents the best of classical music, dance and theater. It also leads the country in arts education; the Kennedy Center Education Department funds arts programs in low-budget schools and trains teachers to integrate liberal arts into their lessons plans.

Designed by Edward Durell Stone, the center’s distinct shape – a boxed rectangle bordered by slender columns – is intentional. The Kennedy Center is close to Reagan National Airport, and the constant air traffic overhead can be noisy; the unique design muffles the sound and keeps the inside silent. It was constructed in 1971, with over 40 countries donating architectural pieces. 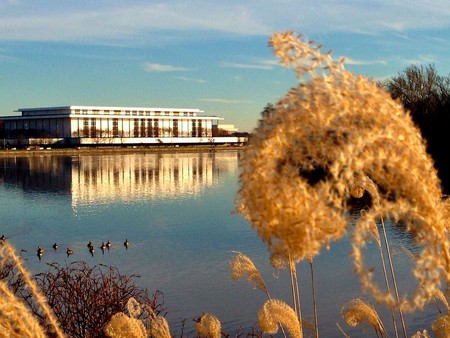 Inside, red velvet carpets line the halls, and flags from every nation (or the ones that the U.S. has diplomatic relations with) hang from the ceiling. This is the Hall of Nations, and it displays exhibitions from international artists. In 2013, for example, Finnish artist Kaarina Kaikkonen collected 1,000 used dress shirts from local DC residents to construct a cloth boat suspended from the ceiling, titled Are We Still Afloat? But it’s not all classic art – the Hall of Nations has also hosted skateboarding exhibitions.

Each time a country asserts independence, or changes its official name, the Kennedy Center works tirelessly to alter the Hall of Nations. A 60-foot scaffold is employed to rearrange the flags, which hang in alphabetical order. Following the Soviet Union’s collapse, 12 new flags were painstakingly installed, and approximately 100 flags were jostled around to maintain the order. 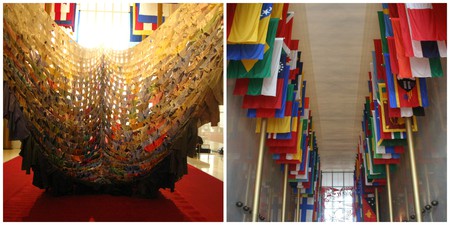 Adjacent to the Hall of Nations, the Hall of States resides. The bright marble room features clear glass panels that let in endless natural light – the room practically glows. The fifty state flags hang in the order they joined the Union, along with the five U.S. territories and the District of Columbia.

The Hall of Nations and Hall of States connect to a grand foyer, one of the largest rooms in the world. At 630 feet long, the room is 75 feet longer than The Washington Monument if it were turned on its side. The windows provide sweeping, panoramic views of the Potomac River. An eight-foot bronze bust of John F. Kennedy sits in the room’s center – after all, this is his monument, and JFK had a unique appreciation for the arts. 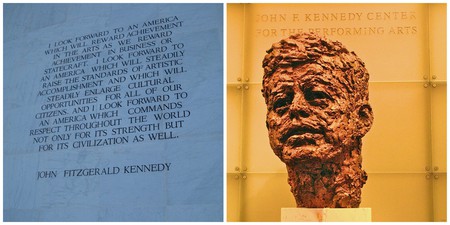 There are three main theaters adjacent to the foyer that host performances. All were intricately and precisely designed for stellar acoustics and seating with ideal lines of vision.

Seating 2,442 and modeled after concert halls in Vienna, the Concert Hall is the Kennedy Center’s largest theater. This is where the National Symphony Orchestra resides. Crystal chandeliers, gifted by the Norwegian government, dazzle spectators and highlight the structure’s ornate decor.

The Concert Hall at the Kennedy Center | © thisisbossi/Flickr

The Opera House holds 2,300 spectators, and is home to the Washington National Opera. An elaborate red-and-gold silk curtain defines the stage, a gift from the Japanese government. Austria also made its mark on the opera house – a Lobmeyr crystal chandelier awes the crowd. 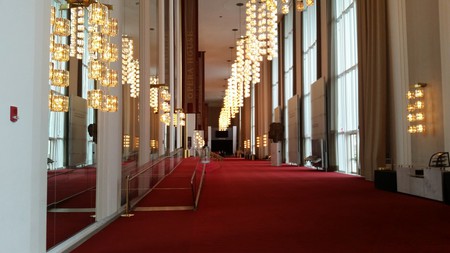 The entrance to the Kennedy Center Opera House | © Godfather 1/Flickr

The Eisenhower Theater mostly hosts musicals and ballet performances. The smaller space is less elaborate and more minimalist, creating a uniquely intimate vibe. The theater is dedicated to President Dwight D. Eisenhower, who signed the National Cultural Center Act into law in 1958. 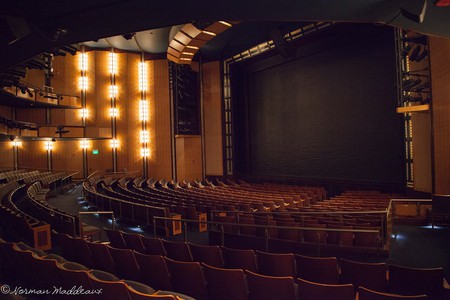 Above the Kennedy Center, an open-air rooftop terrace awaits, which is open to the public from 10 a.m. until midnight each day. See the Lincoln Memorial to the east, the Rosslyn skyline to the west, and the Washington Harbor and Watergate Complex to the north. The sweeping views of the District and Virginia complete the ultimate cultural and scenic experience of a Kennedy Center visit. 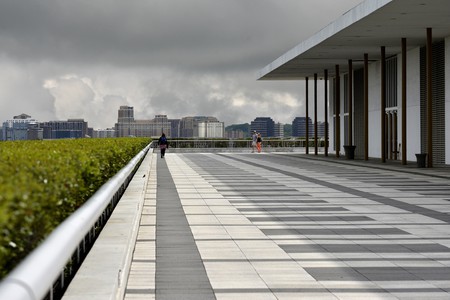