What It’s Like Attending the MLB Home Run Derby 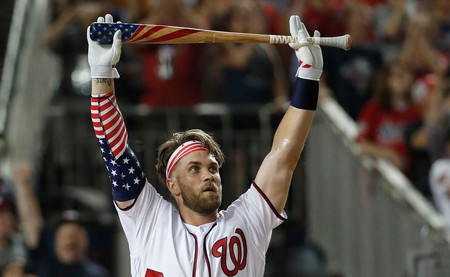 The Major League Baseball Home Run Derby, part of the league’s All-Star Week celebrations, is an annual competition pitting players against one another to see who can hit the most home runs.

It was sweltering and humid in Washington DC, a typical mid-July evening. More than 43,000 fans—most wearing red in honor of their local Washington Nationals—were clamoring inside Nationals Park.

While fans were hoping for a breeze off the nearby Anacostia River, the temperature inside the stadium began to rise as Bryce Harper, the talismanic face of the Nationals, was due up next. The public address announcer began to hype up the crowd as Harper grabbed his bat and stepped up to the plate.

“From YOUR Washington Nationals … BBBBBrryyccee Harper!” 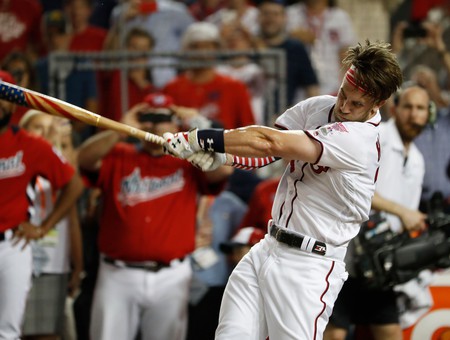 Bryce Harper had the local crowd in Washington, D.C., behind him all evening | © JIM LO SCALZO/EPA-EFE/REX/Shutterstock

Looking like Captain America, clad in stars-and-stripes socks and headband, and armed with a special cherry blossom bat, the hometown favorite began to take his swings for the MLB Home Run Derby, an event which began in 1985 as an exhibition of slugging prowess the day before the MLB All-Star Game.

Suddenly, the crowd wasn’t concerned with the beads of sweat rolling down their faces as they jumped to their feet at every crack of Harper’s bat. Other participants, including Philadelphia Phillies’ Rhys Hoskins, Chicago Cubs’ Kyle Schwarber, and Los Angeles Dodgers’ Max Muncy, got the crowd excited with their massive hits, but it was Harper who brought the exuberance of the thousands in attendance to astronomical levels.

Harper advanced to the final of the eight-participant competition against Schwarber, who began by belting 18 home runs. Following a lengthy commercial break—sufficient time to get the crowd as hyped as possible—Harper stepped up to the plate as Journey’s Don’t Stop Believin’ blared over the stadium’s speakers. Fans chanted “Let’s go Harper!” at the top of their lungs.

After 30 seconds, Harper hit his first ball over the outfield fence, which really got him into a groove; the Nationals player matched Schwarber’s mark by the end of his time limit.

The Derby, which has seen countless rule and format changes since its inception, awards participants for home runs hit longer than 440 feet. This meant Harper got an additional 30 seconds at a moment when he needed just one home run to bring home the title—something he was unable to do in 2013, when he last participated.

Two pitches later, Harper was exuberant in his reaction—flipping his bat and throwing his hands in the air—as his latest swing sent the ball over the wall in right-center field. He was hoisted up by teammates, trophy in hand, as confetti fell from the rafters.

Travel and accommodation provided by Chevrolet