House of Sweden | Courtesy of House of Sweden
The District of Columbia is home to over 170 embassies and consulates, which play a significant part in they city’s architecture stories. Many of the embassies are on Embassy Row, and are gorgeous buildings that are unique and diverse in style, design, and aesthetic. While you will catch glimpses of many if you are walking around the city, here’s our list of some of the most beautiful embassies that should not be missed.

Building
Embassy of Finland | Courtesy of Embassy of Finland
The first “green embassy” in the country, the LEED certified building is a prime example of form and functionality. Resembling a modern cabin in the woods, the building is nestled into Rock Creek Park, and is a demonstration of Finnish values in the workplace — lots of natural light, open areas, and a connection with nature. The back wall looking onto the park is glass, and also has a wooden deck and catwalk in the back area overlooking the picturesque landscape.
More Info
Open In Google Maps
3301 Massachusetts Avenue Northwest, Northwest Washington, Washington, District Of Columbia, 20008, USA
+12022985800
View menu
Visit website
Visit Facebook page
Send an Email
Give us feedback
Mon - Fri:
8:30 am - 12:00 pm
Mon - Fri:
1:00 pm - 4:15 pm

Building
House of Sweden | ©runner30/WikiCommons
Home to the embassies of Sweden and Iceland, the House of Sweden is a super-modern building that overlooks the Potomac waterfront. It’s widely regarded as a prime example of Swedish architecture and design, and won the prestigious Kasper Salin Prize for Best Building in 2007.
More Info
Open In Google Maps
2900 K Street Northwest, Northwest Washington, Washington, District Of Columbia, 20007, USA
+12025361500
View menu
Visit website
Visit Facebook page
Send an Email
Give us feedback

This house on Embassy Row was originally built for a doctor in 1905, and later was home to the Peruvuian Embassy, until Estonia bought it in 1994. The neoclassical style architecture makes it one of the standout buildings on Embassy Row. 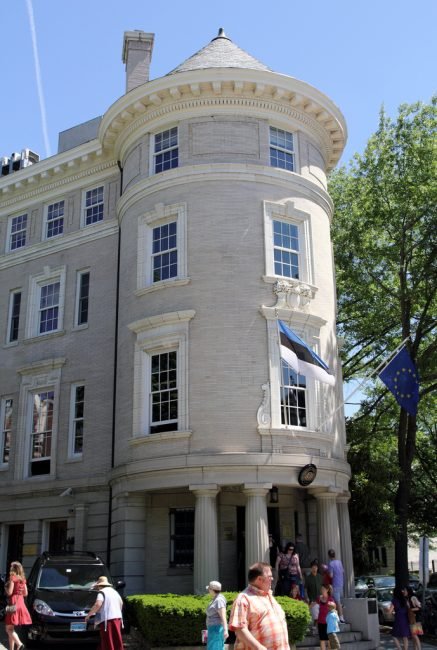 Building
Indonesian Embassy | ©MrTinDC/Flickr
Listed on the National Register of Historic Places, this 50-room mansion was originally constructed as a private residence for Evalyn Walsh Mclean, who was the last private owner of the Hope Diamond. The Beaux-Arts style building was also home to the Red Cross before Indonesia purchased it. A statue of Saraswati, Hindu goddess of knowledge and wisdom, is installed on the outside.
More Info
Open In Google Maps
2020 Massachusetts Avenue Northwest, Northwest Washington, Washington, District Of Columbia, 20036, USA
+12027755200
View menu
Visit website
Visit Facebook page
Send an Email
Give us feedback
Mon - Fri:
9:00 am - 5:00 pm
Give us feedback