Things You Should Consider Before Touring Trump's White House 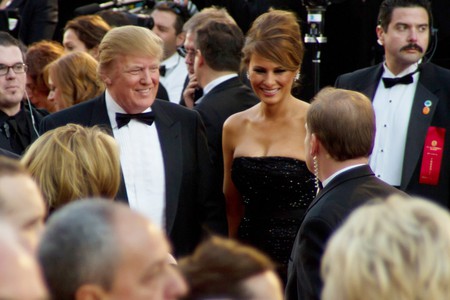 Every year, millions of people visit D.C., and at the top of their “To Do List” is a visit to the White House, which is understandable since it’s a long-standing tradition. However, reserving a spot isn’t easy or quick, and if you assume anyone can take a tour, you will be disappointed. Here are the things you need to consider before you even Google “White House tour reservations.”

First, the White House doesn’t belong to Donald Trump. Nor is it his personal property. The American people own the White House, and every presidential family, with two exceptions, has lived at the White House since the first occupants, President John Adams and the First Lady, Abigail Adams, moved into the newly built mansion back in 1800.

The White House through the looking glass

If you thought Trump’s obsessive tweeting and unseemly rants during the presidential campaign were weird, we got our first inkling of things to come right after the election. That’s when the President-elect announced First Lady Melania Trump and the Trumps’ son, Barron, would not be moving to Washington, D.C. until after the school year. And like a chapter from Alice in Wonderland, thingsjust keep getting “curiouser and curiouser.”

Donald Trump is beginning to discover that not doing something can create just as much chaos and drama as reckless executive orders and memoranda. Because Melania Trump neglected to appoint a head of The White House Visitors Office, no one was in place to manage public White House tours; the White House suspended them for more than six weeks. Although they resumed again on March 7, 2017, the backlog of reservations and the inconvenience alarmed so many members of Congress that Sen. Charles E. Grassley (R-Iowa) resorted to the one method of communication he knew would get the attention of the president: Twitter.

On February 12, 2017, he tweeted “The Tweeter-in-Chief” to ask: “Whoever monitors twitter at WH for businessman president Trump ‘when is WH going to be opened for public tours?’ Mrs G wants to know?”

Whoever monitors twitter at WH for businessman president Trump "when is WH going to be opened for public tours?" Mrs G wants to know

There’s no one home

As we saw with the suspension of White House tours, not having anyone in charge at The White House Visitors Office can significantly impact a range of operations at the White House, State Department, and other branches of government. The Office works closely with the First Lady and her chief of staff, social secretary, director of communications and other staff to plan and organize large events like the annual White House Easter Egg Roll, the lighting of the National Christmas Tree, state dinners, and ceremonies at the White House.

However, more importantly for the hundreds of thousands of American tourists and foreign visitors, the Visitors Office plans White House tours in conjunction with Members of Congress and the State Department, who coordinate the requests and manage the application process. 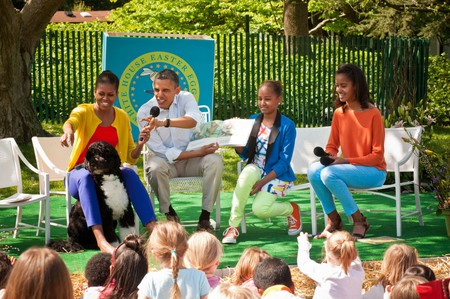 America fought a revolution to overthrow a tyrannical monarchy and established the first government in human history based on the ideals of freedom, democracy, and the rule of law by and for the people. Thomas Jefferson, early in his term as president, began a tradition of keeping the presidency, the White House, and government free and open, and began welcoming visitors to the White House in 1805, a tradition that until Trump took office was a beloved part of American history.

In recent administrations, Presidents George H. Bush, Clinton, George W. Bush, and Obama and the First Ladies created another favorite tradition and held open houses at the White House the day after the inauguration. In each case, they welcomed thousands of people, and during one open house, President George W. Bush once said “I just want to remind everybody that this is not our house. It is the people’s house, and one of the grand traditions in the White House is to share the people’s house with people from all over the country.”

White House tours are a vital part of American culture, history, and politics, and for Members of Congress, it’s the most popular constituent service they provide their voters. Having it closed for weeks didn’t just upset voters, it created a huge backlog of requests. Visits to the White House are also important because they give foreign visitors a glimpse into American history, the values of the American people, and the democratic government of the United States.

These tours help build good relations with other countries and encourage understanding between people. On the same day that the White House announced it would resume public tours, the Trump administration did something out of character and created a bureaucratic Catch-22 that quietly and successfully bans foreigners from White House tours.

As far back as 2008, reserving a spot on a public tour of the White House meant you had to make the request at least one month in advance or as much as six months, depending on the time of year. Your request had to be made directly to your Member of Congress’s office, which then submitted your names to The White House Visitors Office. Up until March 7th, foreigners could also get permission from a willing Member of Congress or join a group and schedule the tour through their country’s embassy in Washington, D.C., but things have changed, at least for foreigners. 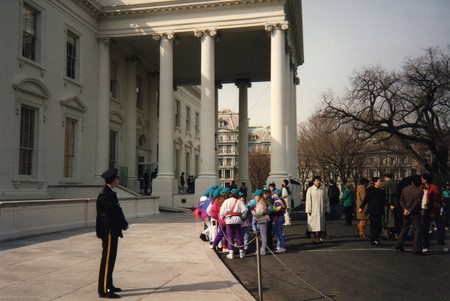 On March 7, 2017, the same day Donald Trump announced White House tours would resume, the White House changed some text on the website’s Tours & Events page regarding public tours of the White House for foreign visitors. From the public statements that immediately appeared on some embassy websites, the State Department has made it clear that “The U.S. Department of State, however, cannot currently grant access to foreign nationals as part of an Embassy-sponsored White House tour group. We are therefore unable to process any requests at this time.”

By creating a bureaucratic Catch-22 between foreign nationals, their embassies in Washington, the State Department, and the White House, Trump has virtually banned all foreigners from touring the White House without having to issue a potentially volatile and controversial executive order. Although some people believed that the move was aimed at Brits, a random check of the French, British, Danish, Australian, and Canadian websites confirmed the ban impacted other countries as well. 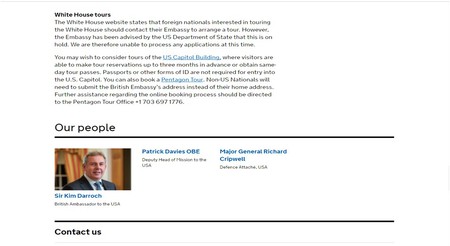 Some online publications, several tabloids, and a few legitimate foreign newspapers, primarily in the UK, reported the impact this would have on visitors, but otherwise, the changes went unnoticed by news outlets in the American press, except for The New York Daily News and political media.

An absentee First Lady, a leaderless White House Visitors Office, volatile relations with other countries, and a president seemingly bent on creating government chaos don’t bode well for the smooth running of things at the White House. So what does this mean if you have hopes of visiting the White House?

If you aren’t an American citizen, it looks like you will have to scratch this off your list. If you’re American, be prepared to accept delays, cancellations, or suspensions of your tour and have a “Plan-B” in place. Who knows? Maybe calmer heads will prevail in the future and foreigners will be able to visit the White House. If you’re an American, you can find out the details of tour times, dates, and more on the White House website. The tour is self-guided, lasts about 45 minutes, and now allows you to take those all-important selfies and group photos. At least for now. 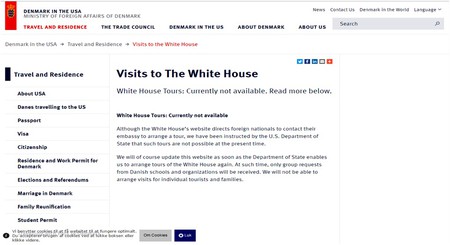 If you want to go, here are the details you need to know to make your plans.

The public tours are free, self-guided, take about 45 minutes to an hour, and requests for tours must be submitted through one’s Member of Congress, and then they submit them to The White House Visitors Office. With so many layers of bureaucracy and potential delays, it’s a good idea to present your request at least one month before you plan to go. Members of Congress work hard to meet the tour requests, but there can be delays. Tour hours are from 7:30 a.m. to 11:30 a.m. Tuesday through Thursday, 7:30 a.m. to 1:30 p.m. Fridays and Saturdays (excluding federal holidays or unless otherwise noted), and there can be last-minute cancellations due to any business at the White House.

All guests 18 or older must submit their full name as it appears on their government-issued photo ID (a military ID, U.S. Passport, state-issued ID, or driver’s license) to the Member’s office for the application, and they must bring the same ID with them to the White House. If your ID is expired, illegible, or you bring a copy of your ID, you won’t be allowed entry.

There is also a list of things you may not bring, including guns, ammunition, or weapons of any size, pointed objects, selfie extension arms, handbags, book bags, backpacks, or purses, personal grooming items, food or drinks, strollers, and more. Be sure to double check the website list of what’s prohibited so that you don’t get tossed off the tour.

Driving in Washington, D.C. is never a good idea for tourists, and that includes trying to park anywhere near the White House unless it’s in a nearby garage (which can be expensive). You’re better off taking the Metro, and there are three Metro stations relatively close by at Federal Triangle (blue and orange lines), Metro Center (blue, orange, and red lines), and McPherson Square (blue and orange lines).

The White House also makes accommodations if visitors are mobile-impaired or need to use a wheelchair, mobile device, crutches, etc. to get around. If you don’t own a wheelchair, the Visitors Center can loan you one, but you must let them know in advance so that they can help you up ramps, to the elevators, etc. Also, your Member of Congress can help you if you have a hearing or visual impairment, and guide animals are allowed to accompany you during the tour.

There are no public restrooms at the White House, and it’s a good idea to use the facilities right before you head over to take your tour. And be sure to check on your tour for any last-minute changes or cancellations by calling the 24-hour Visitors Office information line at (202) 456-7041.