The Top Things to Do in Washington, D.C. If You’re a Politics Buff 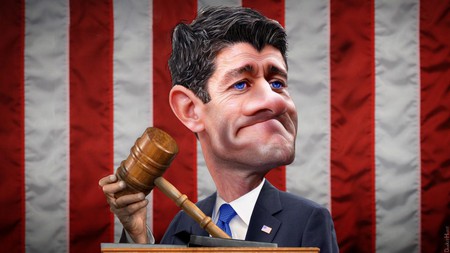 Politics is the name of the game in DC | © DonkeyHotey / Flickr

I love to go to Washington—if only to be near my money. —Bob Hope

For political junkies, Washington, D.C. is ground zero whether you’re into national politics or global gamesmanship. Power, money, a 24/7 news cycle, political infighting, and scandal fuel Washington, D.C.’s economy and social calendar. And you can’t throw a rock in this city without hitting a lawyer or one of the 11,000 registered lobbyists. Insiders may be the only ones who know the “real” story about politics in the nation’s capitol, but that doesn’t mean you can’t get a small taste of what the political culture is like on a day-to-day basis. Follow our guide to explore iconic watering holes, halls of power, memorials, and other politically important sites.

Unless you’re a head of state or a close friend of the POTUS, you won’t be dining with the president anytime soon, but you can dine where some have shared a meal, a secret, or proposed marriage. For decades, Georgetown’s locals have included journalists and politicians, and one place they’ve always relied on for comfort food, or an off-the-record tidbit, is Martin’s Tavern, which the Martin family opened back in 1933.

According to Billy Martin, Jr., the fourth generation of Martins to run the place, every president since Harry S. Truman, who liked Booth 6, has dined at the tavern and so have other VIP pols like former Secretary of State Madeleine Albright. President George W. Bush preferred Booth 12, and freshman Senator John F. Kennedy used to brunch on Sundays after church at Booth 1, a one-seater, and proposed to Jacqueline Bouvier in the booth next to it, Booth 3, on June 24, 1953. When you go, go for brunch or order the famous oyster stew and shepherd’s pie; they’re classics that never go out of style. 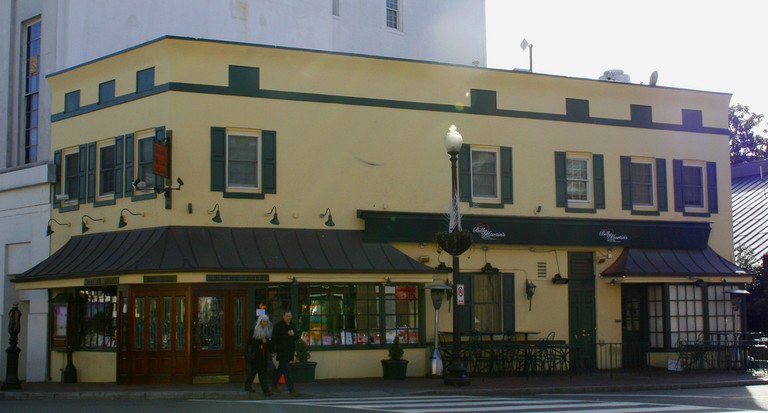 President Abraham Lincoln is a towering figure in American political history and one of America’s most admired presidents, and yet little is known about his private life and personal beliefs. Inferences can be drawn from his speeches, his policies, and how he conducted presidential affairs, but an intimate portrait of the man behind the president is hard to find unless you visit President Lincoln’s Cottage at the Soldiers’ Home (get tickets here). You’ll find it in the leafy northwest residential neighborhood of Petworth.

For three summers during the Civil War, President Lincoln and his family retreated to the Cottage, which offers a perspective of this modest, thoughtful, brilliant man usually not included at other sites. The way he lived while at the Cottage, the work he did there, and the thoughts he put to paper are revealing and drawn from many visits he made to recuperating wounded soldiers and freed former slaves.

Their stories and experiences made the devastating consequences of his decisions palpable and graphically showed him the toll that the Civil War, enslavement of blacks, and the threats to the Union were having on the American people. And as he said, “my thoughts—my solicitude for this great country follows me wherever I go.”

His time at the Cottage inspired him to focus on the concepts of freedom and liberty and delve deeply into the precepts of American democracy, which inspired him to write the Emancipation Proclamation, which is why the National Park Service calls the Cottage “A Museum of Ideas” rather than a typical historical presidential home. 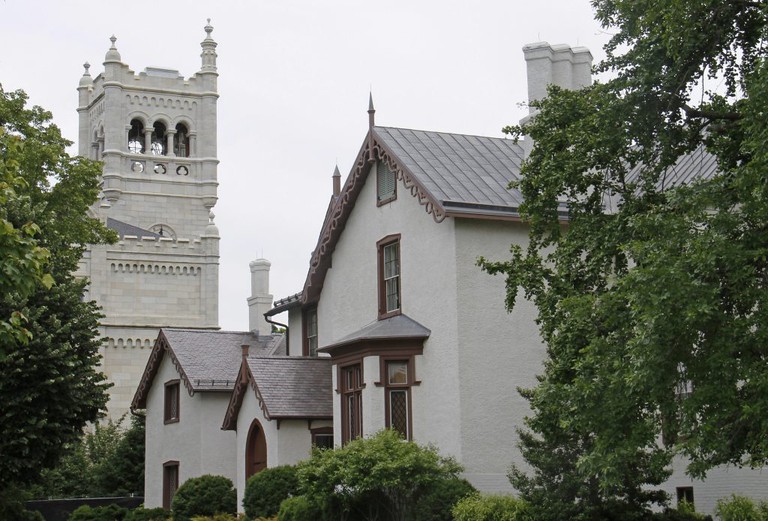 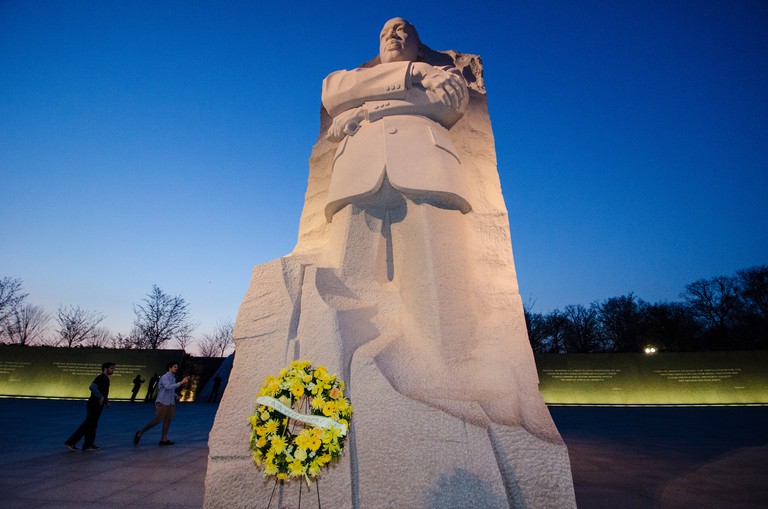 MLK Jr. Memorial | © m01229 / Flickr
Book Now
Arrested more than 30 times for leading the 1950s and ‘60s nonviolent civil rights movement, Dr. Martin Luther King, Jr. fought for desegregation, equality, and voting rights for black Americans and made the ultimate sacrifice when he was gunned down on April 4, 1968, in Memphis, Tennessee. The Dr. Martin Luther King, Jr. Memorial, located in West Potomac Park, celebrates his legacy and the changes he helped bring about. The design, location, and dedication of the memorial are evocative of Dr. King’s struggles and the milestones achieved by the civil rights movement he led. It is also a powerful physical symbol of the civil rights leader’s life and work and is a reminder of Dr. King’s message of peace, hope, and justice. The memorial is the first ever on the National Mall to honor an African American, and its address, 1964 Independence Avenue, commemorates the year he won the Nobel Peace Prize and the Civil Rights Act became law. The memorial, inspired by Dr. King’s words, is the physical symbol of the “Stone of Hope,” which references a line from his historic “I Have a Dream” speech delivered at the Lincoln Memorial on August 28, 1963. That speech was the culmination of the March on Washington for Jobs and Freedom, and in it, King said: “With this faith, we will be able to hew out of the mountain of despair a stone of hope.” Throughout the memorial’s grounds, excerpts from his speeches are carved in blocks of stone and at the foot of his statue. The speech, the date, and the location were memorialized 48 years later, (albeit delayed by two months due to Hurricane Irene), in a 30-foot granite statue designed by Chinese artist Master Lei Yixin and dedicated by President Barack Obama. Before you go, visit the National Park Service website to get details on public transportation, ranger tours of the site, discover upcoming events, and more.
Open In Google Maps
1964 Independence Avenue Southwest, Southwest Washington, Washington, District Of Columbia, 20024, USA
+12024266841
Visit Website
Give us feedback 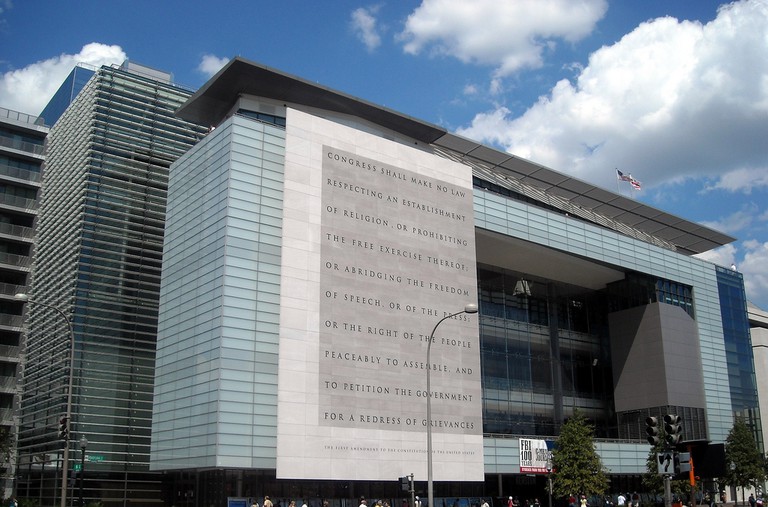 The Newseum | Copyright Josh/ Flickr
Book Now
If you are a Baby Boomer, the Watergate Scandal, the scoop of the Nixon White House’s “dirty tricks” by The Washington Post, and other media-driven events in American politics are still relevant given the state of truth in media and “alternative facts.” The proliferation of instant news without the time for reflection or fact-checking makes The Newseum a vital compass of accountability in today’s social media-obsessed society. The Newseum plays a role in “promoting, explaining and defending free expression and the five freedoms of the First Amendment.” Its programs and exhibits articulate the importance of a free press in a world where it can be difficult to trace the source of a story, a statistic, or claim of truth, especially in American politics. More than six million people have visited the museum since it opened in 2008, and its cutting-edge approach to education and public outreach make it one of the most interactive museums in the world. Seven levels of exhibits, 15 galleries, and 15 theaters graphically demonstrate why “a free press is the cornerstone of Democracy” and each artifact, installation, and exhibit examines a different aspect of the press and free expression and their role in politics and history. On any given day, you can see large sections of the Berlin Wall and learn about the news coverage of its construction and its demolition; listen to radio broadcasts by Edward R. Murrow; and watch films about a range of topics related to free speech, threats to free press, and the role of journalism in politics. The museum also traces the genesis of electronic communication and radio, looks at current technological advances, and examines the technology of the future.
Open In Google Maps
555 Pennsylvania Avenue Northwest, Northwest Washington, Washington, District Of Columbia, 20001, USA
+12022926100
Visit Website
Give us feedback

The Secrets and Scandals Walking Tour

In Washington, a political scandal is like bread and butter, and it’s been this way since the country’s beginnings. Many of the juiciest stories are either forgotten or considered unsafe for consumption in the public schools, but for those who can’t resist political gossip, the Secrets and Scandals Walking Tour could be the best deal in town. It’s an easy walking tour that lasts about two hours, covers less than a mile, and is held most Thursdays at 7 p.m. from March to early November. The tour will fit anyone’s budget because you can pay what you want.

During the walk, your guide will share secrets about illicit affairs and murders and give you a glimpse at hush-hush operations at the Secret Service. Schools don’t usually teach political intrigue, so consider this tour extra credit in the inner workings of politics and discover which First Lady committed bigamy and who really saved the painting of George Washington when the British burned down the White House.

Going is easy; you just reserve online and meet at the Andrew Jackson Statue, located in Lafayette Park across from the White House. 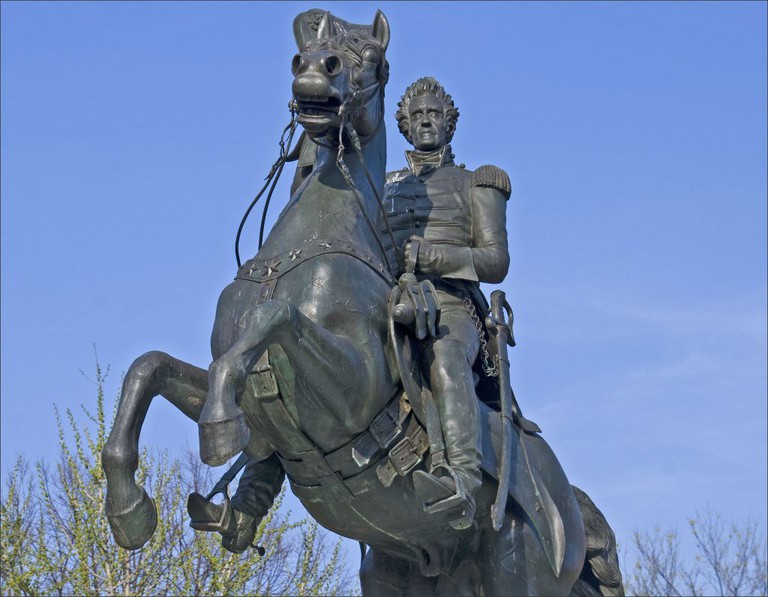 If you are into politics, a visit to the U.S. Capitol is a must, especially since the iron dome has been beautifully restored and renovated. The easiest way to find out what there is to see and do in this center of political power is to contact the U.S. Capitol Visitor Center.

They offer guided tours from 8:50 a.m. to 3:20 p.m., Monday through Saturday—reserve in advance online or through your senator or representative’s office, which you can also visit when you go. See what they are up to and get a free Gallery Pass to witness the activity on the House or Senate floor—both are open when either house is in session from 9 a.m. to 4:15 p.m. If you want to dive deeply into American politics, you can plan on a triumvirate and make a day on Capitol Hill by including a visit to The Newseum, the U.S. Capitol, and oral arguments at the U.S. Supreme Court. 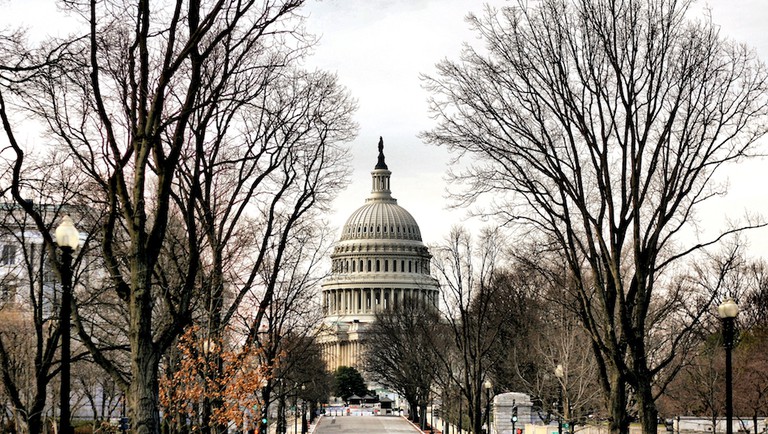