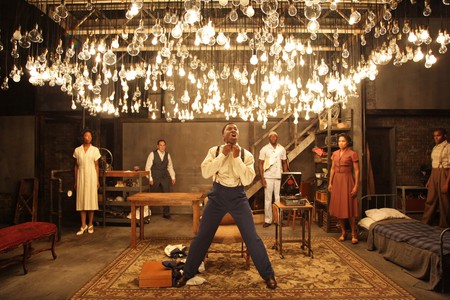 Politics and government may be the engines that drive Washington, D.C.’s economy, but in their spare time, Washingtonians love to escape reality for a while in the darkness and watch a good movie, and in this case, good means entertaining independent films, thought-provoking documentaries, and carefully chosen Hollywood films.

Discerning D.C. movie patrons are fortunate because there’s no shortage of comfortable, state-of-the-art venues to choose from and almost all of them offer amenities equal to or better than the stuff at the brash, crowded multiplex chain theaters. If the big budget blockbuster scene isn’t for you, the District has a primo art house that’s sure to fit your style. 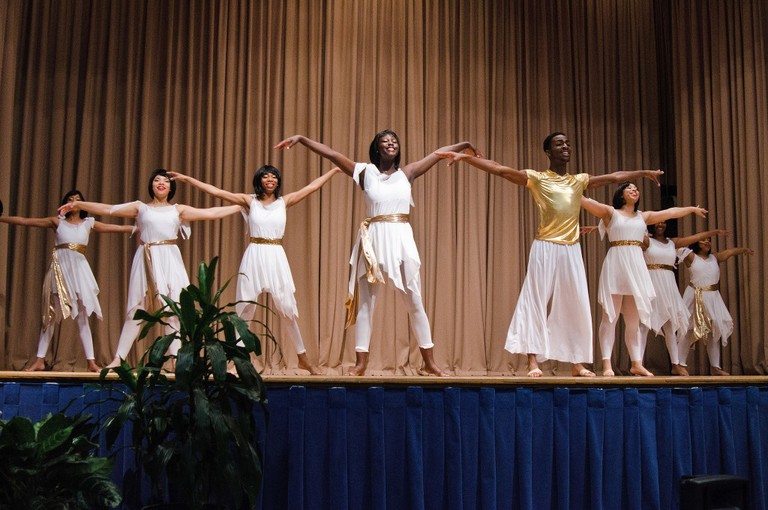 The Virginia State University Sankofa Dance Theatre performance | © U.S. Department of Agriculture / Flickr
Angelika Film Center sort of approaches its art house movie theaters as what’s good enough for the avid movie fans in New York City is good enough for people in Texas, Virginia, California, and Washington, D.C. This unique chain of art house movie theaters specializes in independent and foreign films and does things a little bit differently in the District and offers a theater and a pop-up space called Angelika Pop-Up at Union Market. It’s located in the hot NoMa area and does double duty as a hip microcinema art house and event space. And the food’s dope too. The concessions offer everything from smoked seafood to Middle Eastern cuisine prepared by the 30-plus upscale food and drink vendors at Union Market, the hip indoor food emporium a block away.
Open In Google Maps
550 Penn Street Northeast, Northeast Washington, Washington, District Of Columbia, 20002, USA
+15715123311
Visit Website
Give us feedback 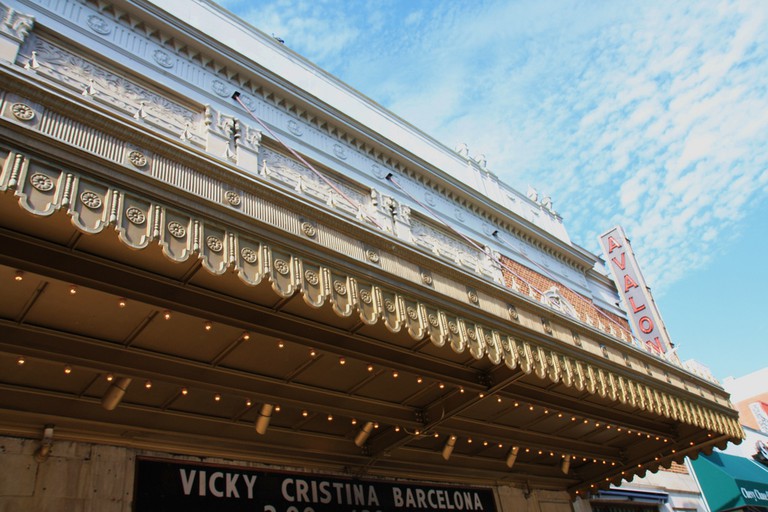 Avalon Theater looks good and shows fantastic films too | © Mr.TinDC/Flicker
For a glimpse into D.C.’s past, head to The Avalon Theatre and café. It’s been a neighborhood anchor since it first opened in 1923, and it’s the only nonprofit movie theater in Washington, D.C. What does that mean for patrons? For starters, tickets are cheaper (and you can buy them online), but the super programs are why Avalon has such a devoted fan base. Depending on your mood or the day of the week, you can attend the Wednesday Signature Series, Avalon Docs, Programmer’s Choice, Film in Focus, Lions of Czech Film, French Cinémathèque, Reel Israel DC, Senior Cinema Thursday, or Weekend Family Matinees. And check out the café; it’s a cut above the rest and serves reasonably priced goodies instead of junk food. You can still get your popcorn and soda fix, but there are small sandwiches, just-baked cookies and brownies, ice cream, and beer and wine.
Open In Google Maps
5612 Connecticut Avenue Northwest, Northwest Washington, Washington, District Of Columbia, 20015, USA
+12029663464
Visit Website
Give us feedback

Landmark Theatres are in a class all their own and offer an alternative to the big movie house chains. Landmark Theatres is the nation’s largest group of playhouses dedicated to showing documentaries, 3-D, independent, foreign, and restored classic films. No matter what city you’re in, you can count on their 57 theaters and 275 screens in 28 markets to deliver and that includes the four theaters located in the DMV. Landmark is serious about the customer experience and offers online ticket sales, Dolby sound, high-tech projection, closed captioning and hard-of-hearing assistance, handicapped accessible venues, large comfy seats, and premium concessions. The newer theaters include high-end bars with full drink menus and upscale food selections.

Movie Theater
Facebook
Email
Twitter
Pinterest
Copy link
Share
Map View
Doing dinner and a show is easy when you buy your movie tickets at Atlantic Plumbing Cinema in the heart of the booming Shaw neighborhood. The theater is right next to Haikan, a über-popular chicken ramen spot, so you can eat and dash right next door, or try Declaration across the street. It has a dynamic young chef whose American rustic food is top-notch. Atlantic Plumbing Cinema is the latest edition to Landmark Theatres’ D.C. portfolio and what strikes you most is the focus on the lounge, which sits front and center at the entrance. With its mod, oversized leather seating, and frosted glass and silver accents, the bar feels more like an upscale bar at a fancy hotel than a movie theater, so feel free to linger before or after the movie, nosh on some appetizers, and sip a cool cocktail.
Open In Google Maps
807 V Street NW, between 8th & 9th Streets, Northwest Washington, Washington, District Of Columbia, 20001, USA
+12025341965
Visit Website
Give us feedback 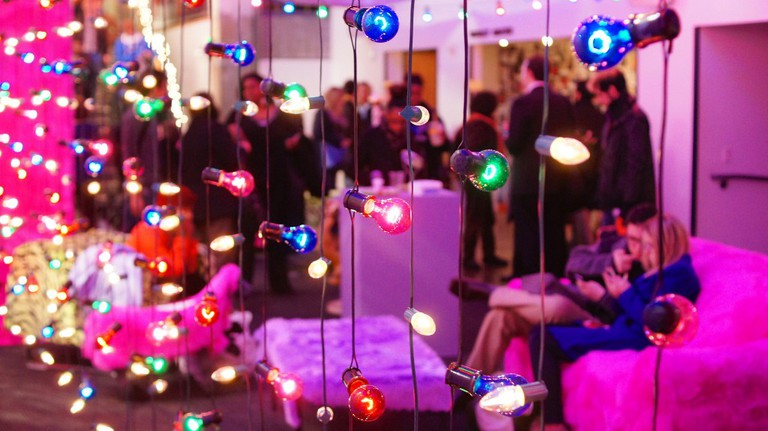 Movie Theater
Facebook
Email
Twitter
Pinterest
Copy link
Share
Map View
Located in the heart of Penn Quarter, E Street Cinema crowds are always clamoring to see the theater’s unique movie offerings or attend an enriching program. Part of the draw are eight large, state-of-the-art luxury screens enhanced with Dolby sound, but truth be told, the concession area is never slow. People catch up at the espresso bar, sample the gourmet fare, or quench their thirst with a D.C. original like a classic gin Rickey made with Green Hat gin. E Street Cinema is the city’s most Metro-accessible theater and is just one block from Metro Center and walking distance to four other Metro stations. If you are ravenous before or after the show and concession snacks just aren’t enough, try Pi Pizzeria or DBGB Kitchen and Bar.
Open In Google Maps
555 11th Street Northwest, Northwest Washington, Washington, District Of Columbia, 20004, USA
+12027839494
Visit Website
Give us feedback

Movie Theater
Facebook
Email
Twitter
Pinterest
Copy link
Share
Map View
Wedged in a triangle between upper Dupont Circle, Georgetown, and Foggy Bottom, the West End is a chi-chi location, and thanks to a major renovation in 2016, it now has a theater to match. All three stages were made over, and now guests can enjoy plush leather seating, riser platforms for better visibility, larger screens, and a revved up bar area that offers happy hour specials. The West End has an eclectic mix of fast-casual and fine-dining restaurants, but give Rasika West End a go. This fantastic Indian restaurant is always busy, so make your reservation when you buy your tickets and take the Foggy Bottom Dupont Circle Metro because parking is impossible.
Open In Google Maps
2301 M Street Northwest, Northwest Washington, Washington, District Of Columbia, 20037, USA
+12025341907
Visit Website
Give us feedback 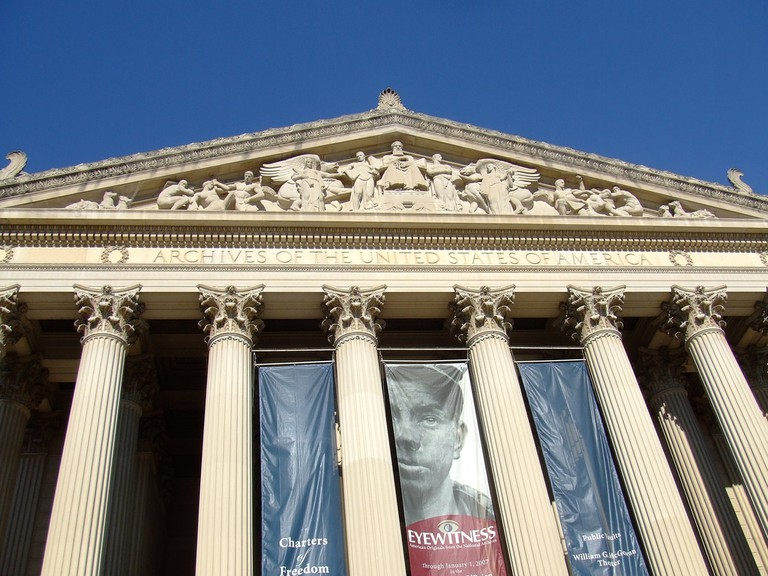 The William G. McGowan Theater is in the National Archives | ©saturnism /Flickr
Prestigious, historical, and cutting-edge are all superlatives that describe the films of four-time Oscar®-winning documentary filmmaker Charles Guggenheim and the Center for Documentary Film at the National Archives, which bears his name. Part of the Center’s mission is to showcase preeminent documentary films in the Archives technologically advanced, 290-seat William G. McGowan Theater. The rare and historical film collection at the Archives is a national treasure, but the Archives also celebrates contemporary filmmaking through programs like free public screenings. Especially popular are the free screenings held every year the week before the Oscars® that feature films nominated for Academy Awards® in the categories of documentary feature film, documentary short film, live-action short film, and animated short film.
Open In Google Maps
701 Constitution Avenue Northwest, Northwest Washington, Constitution Avenue Northwest, District Of Columbia, 20002, USA
Give us feedback

Movie Theater
Facebook
Email
Twitter
Pinterest
Copy link
Share
Map View
Quirky, off-beat, tiny, and free or almost free ($5), Suns Cinema has a cult following in D.C. Movies are shown on a large, widescreen TV, and a quick perusal of the calendar reveals a diverse range of genres and subjects. You can see classics like Dr. Strangelove, comedies like Amelie, and oddball movies like Pharoh Haqq, an Afrofuturist science-fiction film made in 1972 that features Sun Ra. The bar serves a small selection of cheap drinks and snacks, but more notable is the wallpaper that features a striking red background covered with large, racing zebras.
Open In Google Maps
3107 Mount Pleasant Street Northwest, Northwest Washington, Washington, District Of Columbia, 20010, USA
Visit Website
Give us feedback
Give us feedback