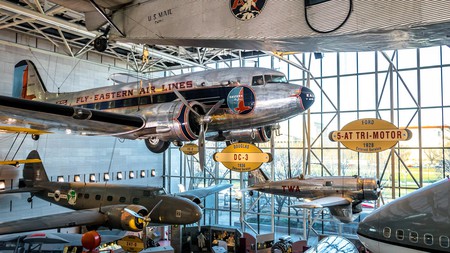 We’ve scoured the US capital to find the best nearby hotels – bookable on Culture Trip – to maximize your visit to the Smithsonian National Air and Space Museum in Washington DC.

If you’re visiting Washington DC, you’ll most likely want to check out the city’s most popular attractions. Whether it’s the White House, the Capitol Building or the 17 different Smithsonian museums, the most convenient place to stay is around the Penn Quarter. Not only is it within walking distance of the biggest tourist sights, it’s also brimming with vibrant restaurants, bars, shops and hotels. 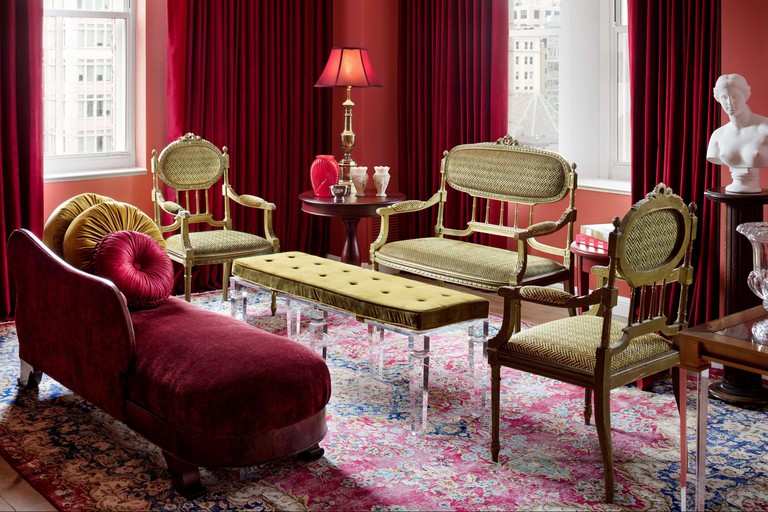 Courtesy of Riggs Washington DC / Expedia
Housed inside what was once the city’s most illustrious bank, this four-star hotel is fittingly luxe. The interior combines plush features – such as marble columns, baroque wallpaper and art deco-style headboards and chandeliers – with subtle details that hint at its past. These include a steel safe-turned-minibar, and a check-in desk that looks like a bank teller’s counter. The hotel’s brasserie, Café Riggs, serves up refined European classics to well-heeled customers, while cocktail bar Silver Lyan’s offering is more experimental. Riggs is perfectly positioned for exploration, being less than a 20-minute walk from the National Mall, the White House and the Smithsonian. 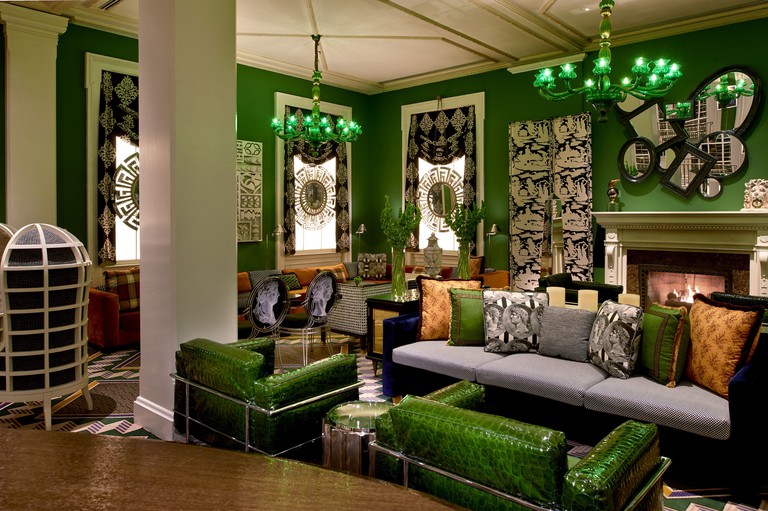 Courtesy of Kimpton Hotel Monaco Washington DC / Expedia
Museum lovers should check themselves into this Penn Quarter hotel. A 20-minute stroll to the Smithsonian National Air and Space Museum, the hotel is also conveniently close to the Smithsonian Museum of American Art, the National Building Museum, the National Archives Museum and the Naval Heritage Center. It’s housed inside the building that was the city’s first General Post Office, and still has all the high ceilings, impressive columns and marble from when it was built in 1839. But it also features the modern touches you expect from a Kimpton hotel – such as evening wine hours, in-room yoga mats, and free bike rentals. 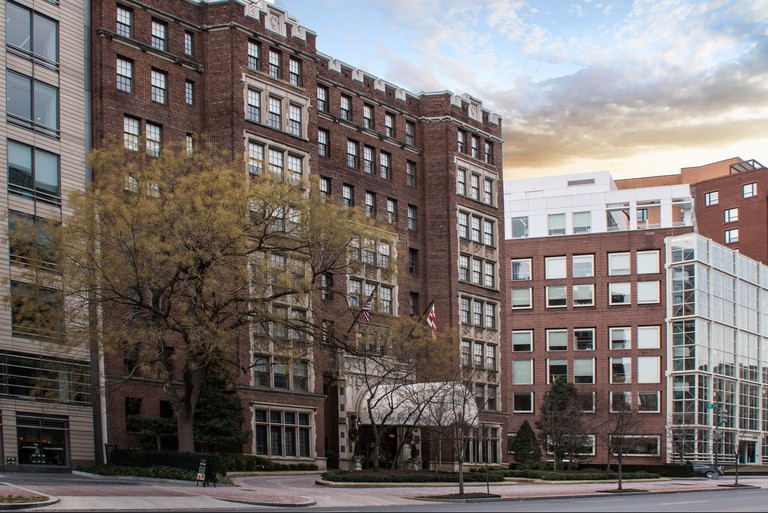 Courtesy of Henley Park Hotel / Expedia
You’d be forgiven for wondering whether you’re still in Washington DC when arriving at this impressive red-brick building in the Penn Quarter. Its Tudor-style architecture, complete with crests, stained-glass windows and marble gargoyles, might have you thinking you’ve rocked up to a stately home in the English countryside instead. The grandeur continues inside with dark wood accents in the lobby and restaurant, velvet bolster pillows and ornate carpets in the bedrooms, and a roaring fire in the lounge area. 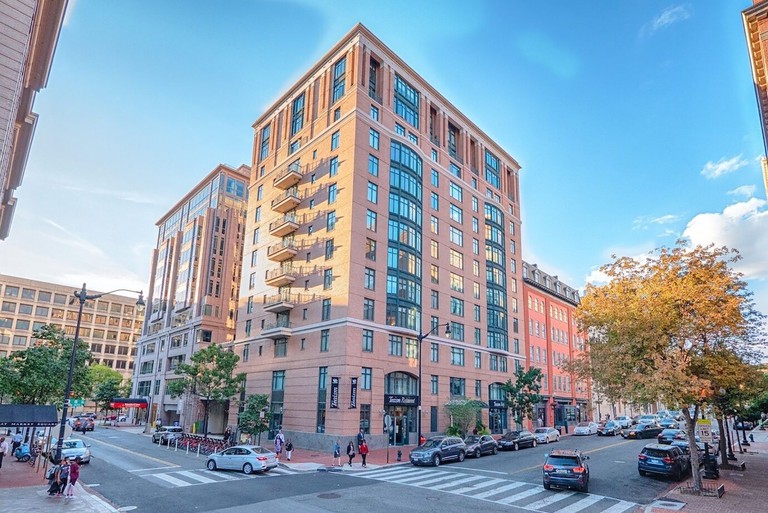 Courtesy of National at Penn Quarter / Expedia
Those who like to be a bit more self-sufficient when traveling will enjoy staying at this apart-hotel, around 10 minutes’ walk from the Smithsonian National Air and Space Museum. Along with a bedroom and bathroom, each apartment has its own fully equipped kitchen, complete with a fridge, stove and dishwasher, plus a lounge and dining area. Guests are able to go out and explore the city before coming back to what feels like a home away from home. 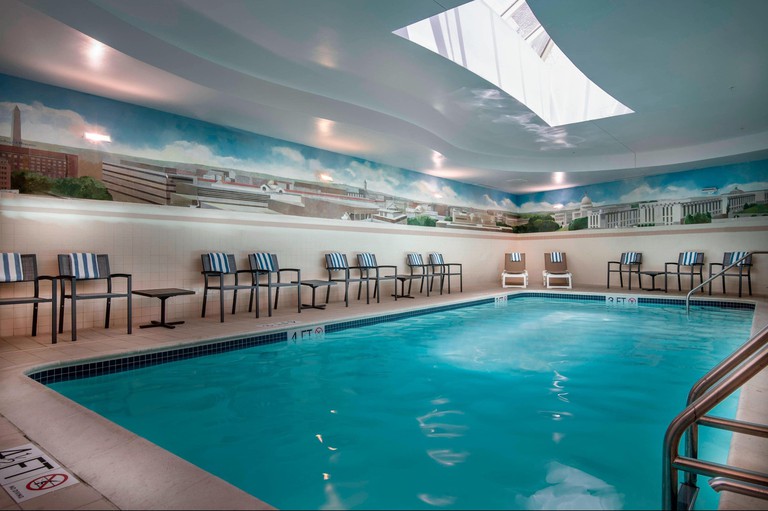 Courtesy of Residence Inn Washington DC, Capitol / Expedia
Residence Inn is a fitting name for this Marriott-owned hotel, since you could happily live here for an extended period. Each room is kitted out with a bathroom, beds, a full kitchen, dining table, work desk and seating area – so you can sleep, eat, work and relax all in one place. Don’t fancy cooking? The hotel has its own snack shop and a breakfast buffet. There’s also a fitness center and swimming pool, if you want to keep up your usual fitness regime while away from home. 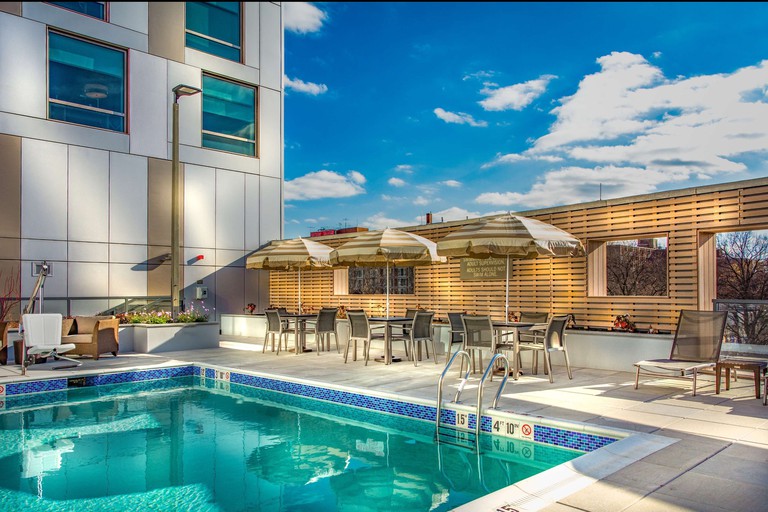 Courtesy of Hyatt Place Washington D.C.:National Mall / Expedia
If you like a room with a view, book a stay at this 13-story hotel near the National Mall. Rooms on the upper levels offer sweeping panoramas of the city that alone make the price of a stay worthwhile. Stuck on the lower levels? Fear not – Hyatt Place has a rooftop bar and terrace so you’ll still have a chance to take in the city from above. Back down on the ground, there’s also a seasonal outdoor pool and sun terrace for guests to bask in. 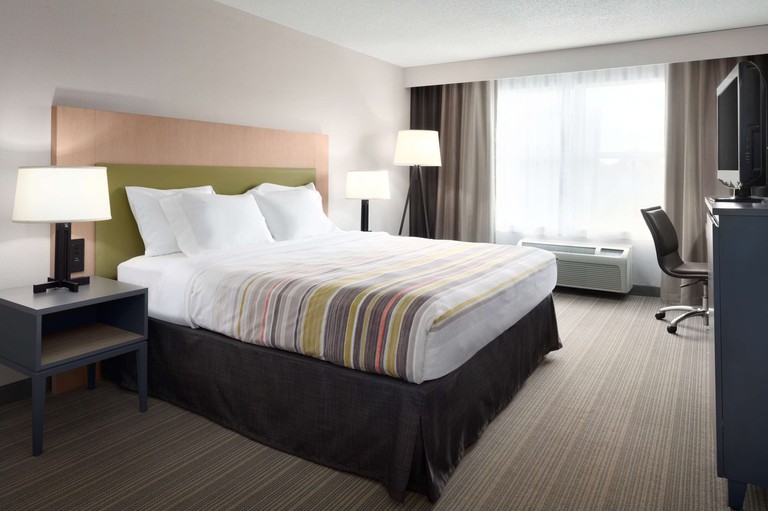 Courtesy of Country Inn and Suites by Radisson, Camp Springs / Expedia
It may be a little further out of the city than the other hotels on this list, but don’t let that put you off this affordable three-star hotel in Camp Springs. Guests can enjoy its comfy rooms, great service and free breakfast before hopping on the metro. It’s just a 20-minute trip on the Green Line to get to DC’s biggest landmarks, including the Smithsonian museums and the National Mall. The hotel even provides a free shuttle service to the metro station. 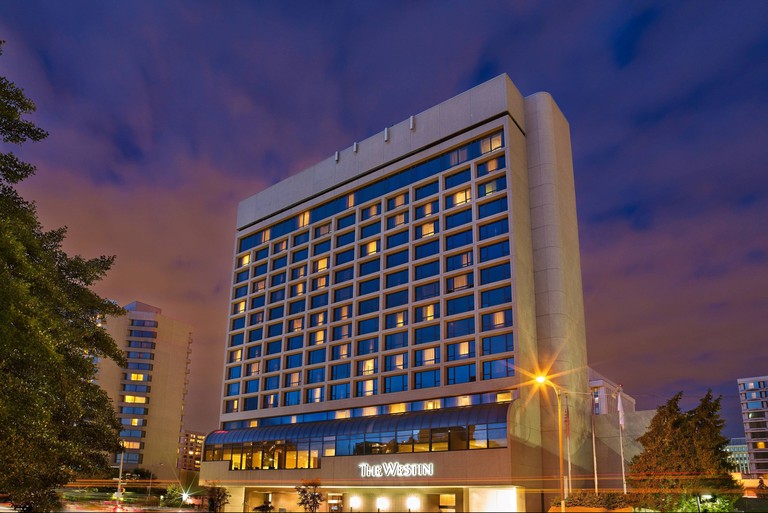 Courtesy of The Westin Crystal City Reagan National Airport / Expedia
This four-star hotel couldn’t be more ideally placed for touring the attractions that Washington DC and its nearby areas have to offer. Just across the Potomac River in Arlington, Virginia, it takes no more than 10 minutes on the Yellow Line to reach the likes of the White House, National Mall and the Smithsonian museums. It’s also just a 20-minute walk to the Pentagon, and a five-minute shuttle ride to the Reagan National Airport. After a day of sightseeing, nothing feels better than coming back here and flopping into one of the Westin’s signature Heavenly Beds.

Looking for somewhere different to stay nearby? Book into one of the best historic hotels in Washington DC now with Culture Trip, or, if traveling with a four-legged friend, opt for a top pet-friendly stay. Inspire your itinerary with the best things to do outdoors in the US capital – and if you have time on your trip, don’t miss the best weekend trips and getaways.