The 10 Must-See Artworks In Washington, D.C. 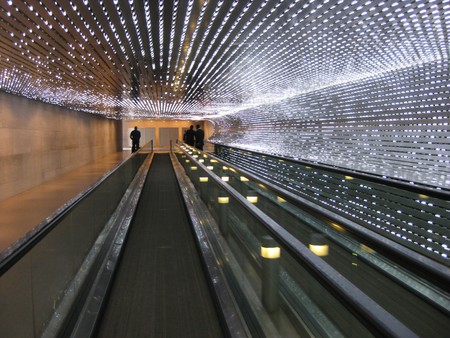 Washington, D.C. houses a wide variety of famed art galleries that offer everything from rare classics to post-modern experimentations with technology. Read on to discover the most intriguing artworks that await you.

As part of his ‘Weight of History’ collection, Novo employs innovative software to lift the ink off pages of printed documents and transfer it to a canvas. He constructs art that resembles the night sky from some of the most influential and menacing texts of the 20th century, such as Mein Kampf, Muammar Gaddafi’s Green Book, and Vladimir Lenin’s The State And Revolution. 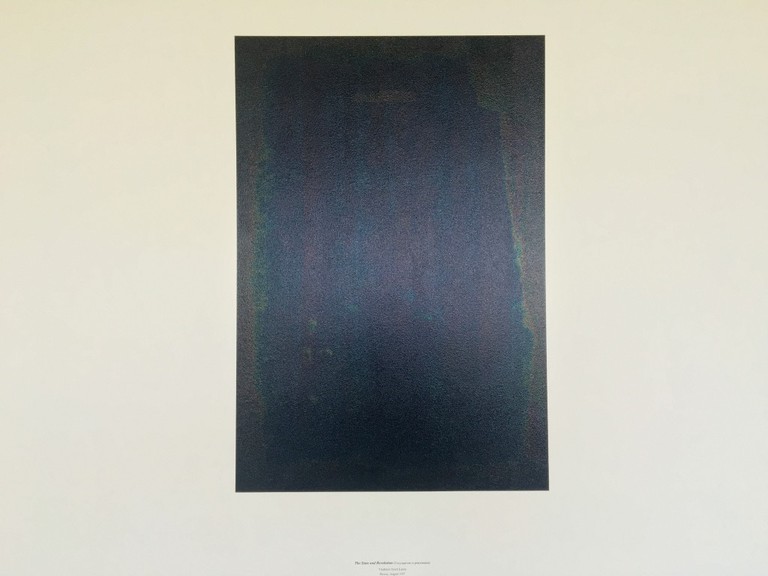 In 1981, Ronald Reagan appointed the first female justice to the Supreme Court – Sandra Day O’Connor. Three more have joined her in the last 35 years: Elena Kagan, Sonia Sotomayor, and feminist icon Ruth Bader Ginsberg. The painting depicts the four court justices solemn and strong in a discipline that is dominated by men. The colossal painting measures seven feet by five and a half feet – a testament to the power of women.

As one of the quintessential figures in the Impressionist movement, Monet is known for his depictions of outdoor scenes with loose brush strokes that capture light and movement. He strove to showcase the intricacies of a scene – the fleeting light, the ripple of a tide. This is best demonstrated in Japanese Foot Bridge, where viewers not only see what the scene is, but how Monet perceived it. 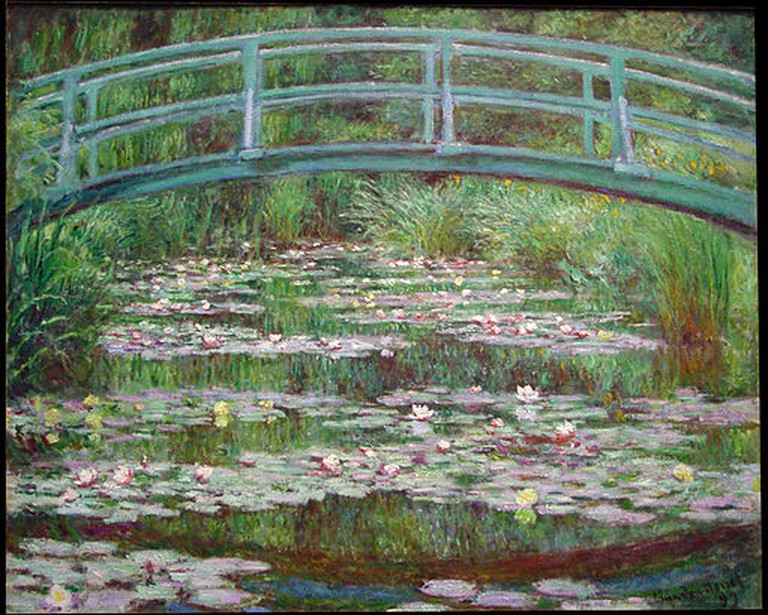 Within a mere decade, Van Gogh created 36 self-portraits; the portrait in the National Gallery of Art’s collection was painted during Van Gogh’s time at the mental asylum St.-Rémy. He believed in the power of art to ease his mental illnesses and instabilities. He purportedly started and finished in one sitting, evidenced by the thick paint and restless brush strokes – the end product is a seemingly controlled image that was created sporadically. 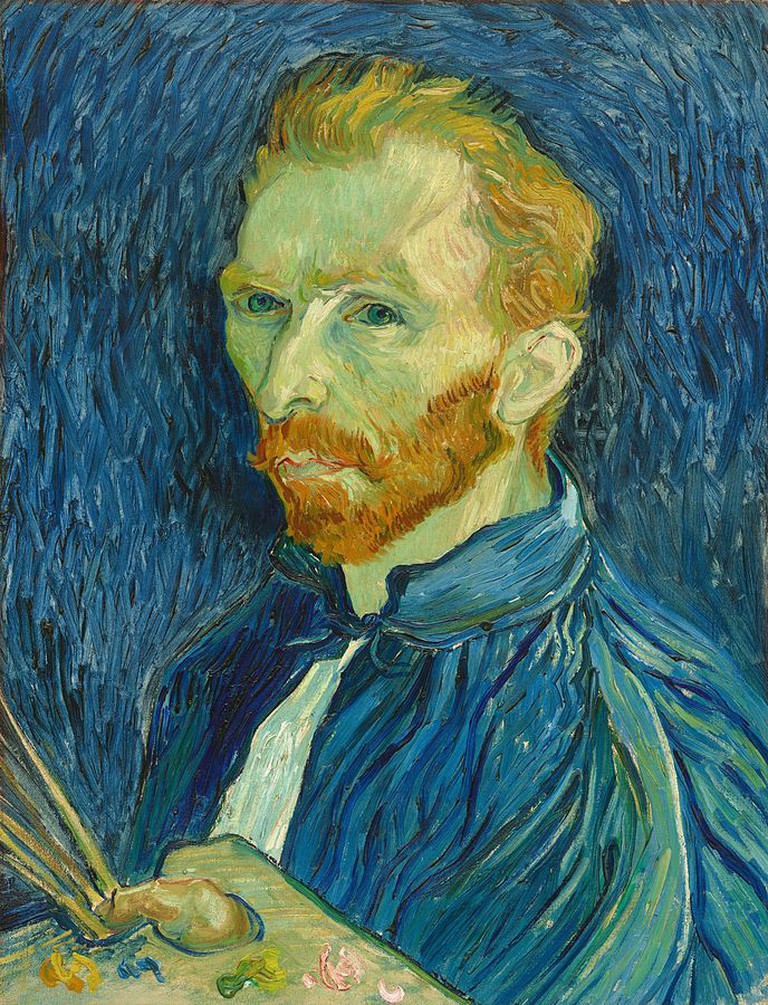 A series of 24 photos from clocks in all 24 time zones sweep across the walls of the Hirshorn’s inner rotunda. Pousttchi traveled across the globe to reach each time zone, and she captured a photo of a clock there at the same local minute. From Bangkok to Moscow, she sought to demonstrate ‘global synchronism’ while also pondering the nature of colonialism – all countries use the same form of clock, which was often forcibly introduced by invading western powers. The light and shadows cast on the clocks at different hours demonstrate the U.S.’s influence on other country’s time-keeping.

Michelangelo Pistoletto, Venus of the Rags, 1967

By juxtaposing the classic marble sculpture with a pile of tattered modern clothes, Pistoletto creates a stark contrast between hard and soft, fixed and moving. The love goddess and her colorful western rags collide the rich past of Italy with the materialism of modern western society, and the scene makes a comment on consumption and disposal. Sculptures of Venus are preserved for the decades, but these rags would have been discarded – what separates them? What gives her more intrinsic value? 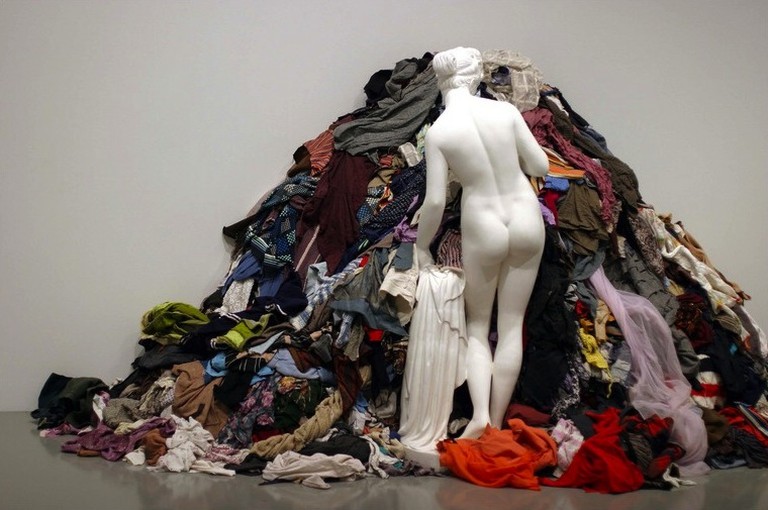 This is the only da Vinci painting in all of the Americas! Early into his experimentation with oil paintings, there are slight imperfections in the artwork – some wrinkling of the paint – but spectators can also detect the subtle naturalism that would become a staple in da Vinci’s masterpieces. The young girl depicted was the daughter of a wealthy Florentine merchant; she poses outside – a rarity at a time when women were portrayed sheltered indoors. 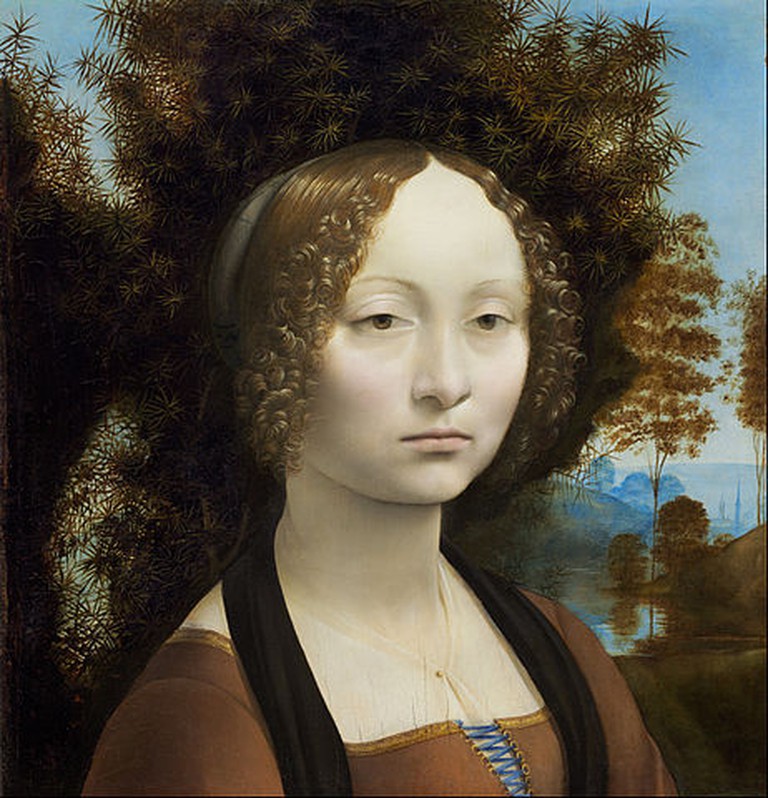 This collection of Mark Rothko’s abstract expressionist paintings is exceedingly unique because the room itself was designed in collaboration with Rothko. A small room contains just four Rothko paintings, and, upon visiting the collection in 1960, Rothko suggested a sole bench sit in the middle – keeping the aesthetic minimalist. Rothko preferred to exhibit his work in scenes of normality and every day living. The Rothko Room awaits spectators inside The Phillips Collection; the paintings are as follows: Ochre and Red on Red (1954); Green and Maroon (1953); Green and Tangerine on Red (1956); Orange and Red on Red (1957).

The moving underground tunnel connects the modern art in the east wing to the classic portraiture in the west wing of the National Gallery of Art. It makes a comment on how technology shapes art – a futuristic portal between past and present, modern and classical. It’s also just fun to ride and marvel at the strobe lights. 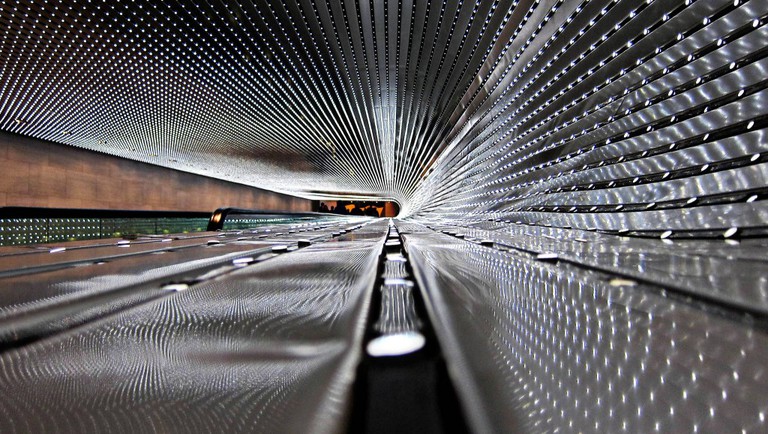 The bronze memorial commemorates the Massachusetts 54th infantry – the first regiment to allow African Americans in battle during The Civil War. At the start of the war, they were not permitted to fight, but, following The Emancipation Proclamation, recruits from states across the nation showed up to fight for the Union. The 54th Massachusetts were defeated at Fort Wagner, and around half the men were killed, but their valor demonstrated in battle advanced civil rights. By the war’s end, African Americans comprised 10 percent of all Union forces. The detailed facial features in the memorial served to humanize black men in a period of racial stereotypes and generalizations. The National Gallery of Art’s piece is a bronze cast of the original, which resides in Boston. 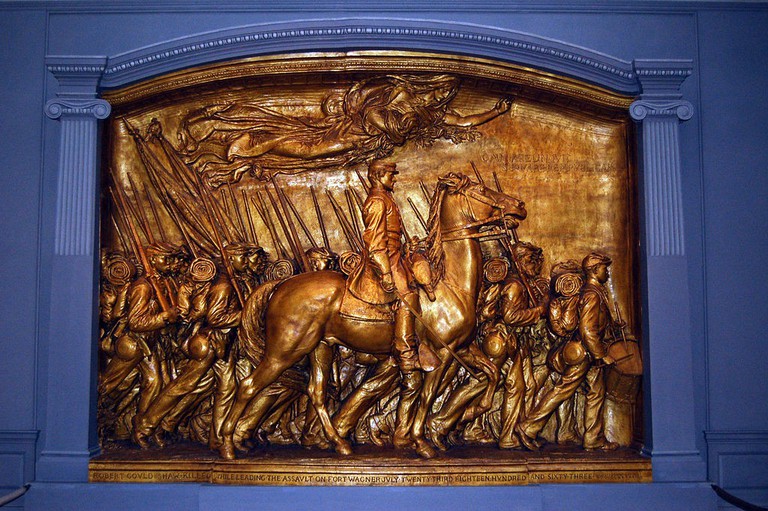