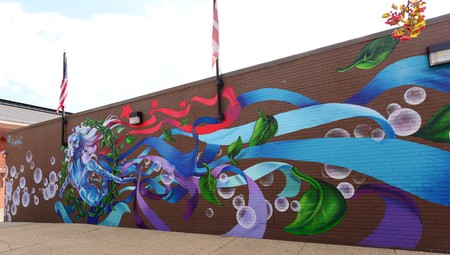 DC’s street art is emotionally raw and imbued with political undertones. Metro police has recently toughened its stance on illegal graffiti, but privately commissioned murals are thriving. Government-sponsored street art is the new thing. Collaboratives like Murals DC aim to beautify the city by commissioning legal masterpieces and to shift the attention (and kids) away from illegal tagging. Because in Washington DC, it’s defiance or acquisition.

A widow paints a mural to protest the disastrous healthcare system. On the back wall of a brick gas station nestled on a busy street, big hitting policy makers pass the mural each day. Regina Holiday began painting six days after her husband, Fred, died of kidney cancer; after his diagnosis, Holiday became well too acquainted with the bureaucratic mess of the U.S. healthcare system. There were days Fred couldn’t eat because the hospital wasn’t legally allowed to feed him until his files transferred from the old hospital, a process they claimed can take up to 21 days. And each copied page of his medical records cost 73 cents.

The mural depicts her late husband lying frail, weak in bed, with a note in his hand, “Go after them, Regina.” Those were his last words, and she obliged. 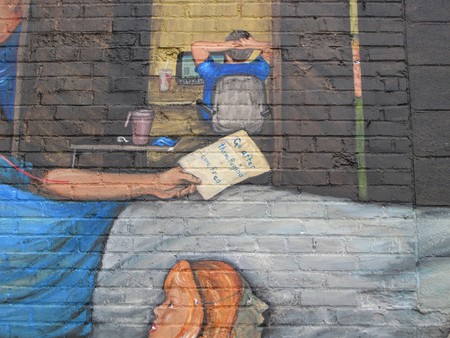 "Regina told us her story in person, accompanied by the notebook of her husband’s medical record, which she was only allowed to get on paper, at $0.73 a page." http://cli.gs/73cents | © Ted Eytan/Flickr

The Alchemy of Ben Ali

This artwork demonstrates the nation’s progress since Ben Ali first walked its streets. Ali was born in 1927, and founded the famed Ben’s Chili Bowl in 1958. The mural sits in an alley adjacent to the original U Street location; there are currently nine Ben’s Chili Bowls across the DMV area. Being a neighborhood staple, the intricate mural depicts scenes of interracial marriage, gay rights, Martin Luther King’s March For Jobs, and the Million Man March. Commissioned by Murals DC, the masterpiece aims to show how the block, and the world, has transformed through the decades. 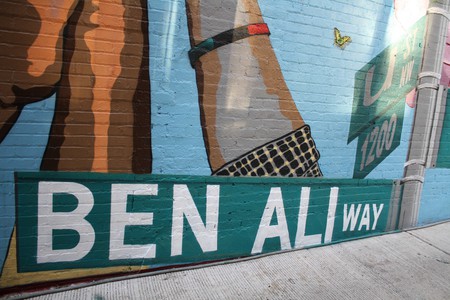 Ayesha Abraham was a Bethlehem-born Palestinian, but she moved to the U.S. as a child and later founded Mama Ayesha’s restaurant where she first introduced the District’s palettes to Middle Eastern delights in the late 60s. After she passed away, her family decided to honor her legacy with a mural showing her gleefully posing with past presidents, and a bald eagle flying high in the background.

The art is situated on the brick wall of the still-thriving restaurant. But the mural was recently vandalized with obvious political motivations. Someone painted blood splatters across the presidents’ chests, yet Mama Ayesha herself was not tainted – likely sending a message about U.S. complicity in the Israeli occupation of Palestine. In so many words, the vandal claims these men have blood on their hands – the blood of Mama Ayesha’s people. 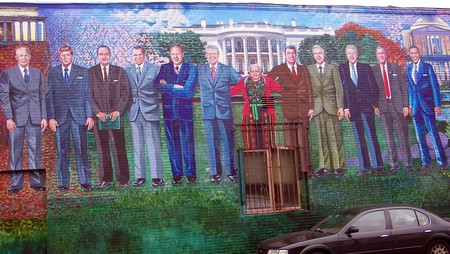 This mural protests taxation without representation and Congress’s obstruction of the democratic process in DC. If you’re unfamiliar with how DC is perpetually meddled with, here’s the deal: DC is not a state in itself, but it belongs to no state. It is an independent district, engineered as the nation’s capital. But the 658,000 people who live here are too often forgotten about. While Congress sits in DC, no one in Congress is there to fight for its interests. DC is not afforded voting Congressional representation, and, as a result, Congress makes choices that negatively impact the capital because no one is there to defend it. Prior to 1961, DC residents weren’t even permitted to vote in presidential elections.

Currently, Washingtonians are fired up and ready for another guaranteed-to-fail bid for statehood. So there they are, voiceless in the heart of democracy. Oh, the irony. 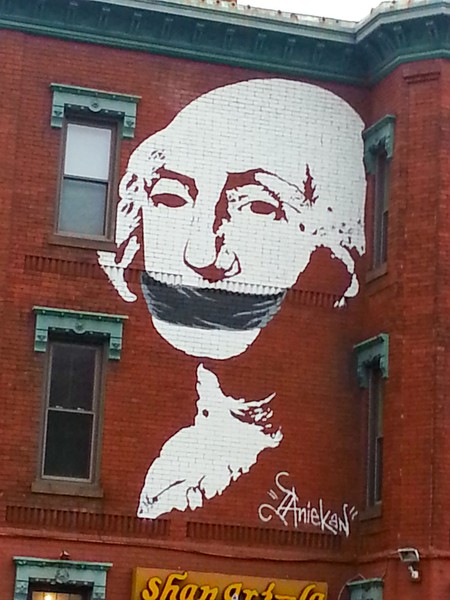 © Tim Evanson/Flickr
Give us feedback