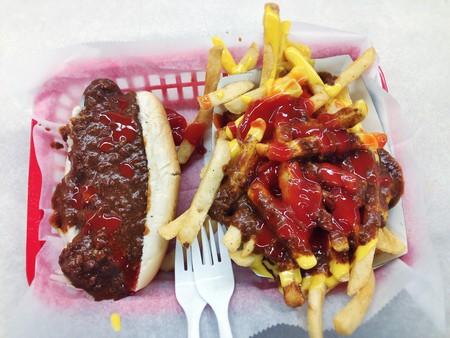 The famed, mouthwatering half-smoke is exclusive to the DMV area. It’s similar to a hot dog, yet completely different. The sausage is larger, spicier, and more flavorful, usually comprised of half pork and half beef – but it can be any combination of ground meats that are smoked and spiced.

If you’re out and about in downtown D.C, perhaps strolling around The National Mall, or enjoying a walking tour of the monuments, you’ll be enticed by the appetizing, pervasive smells of street vendors. With hotdog carts lined along Constitution and Pennsylvania Avenue, this is a good place to begin your half-smoke sampling of the District. The freshly made, sizzling scents are ready to grab and go. But where did this greasy delicacy originate?

The history of the half-smoke dates back to the 1930s, when Washington native Raymond Briggs spiced and ground his sausages. Briggs then acquired a meatpacking company, aptly called D.C. Briggs, in the 1940s and began producing the peculiar sausage on a commercial scale. After he sold the company to another meat distributor, the supposed impeccable quality of the sausage declined, and other vendors created their own interpretations to give homage to the original – leading to a debate of what actually entails a half-smoke.

Presently, half-smokes are the ‘official dog’ of the Washington Nationals. Nothing says ‘Murica like dining on American meat ingenuity while a spectator at a baseball game. Nats Park offers their own interpretation on the half-smoke, topping a traditional half-smoke with Maryland crab dip and Virginia ham; this creates a trifecta of local ingredients to represent each letter in the DMV.

The Nationals source their classic half-smokes from the famed Ben’s Chili Bowl. The local franchise pairs each order with a side of delectable chili cheese fries. The dog is so enticing here that even President Obama has made the trip to Ben’s to savor the half-smoke. Bill Cosby was also an avid fan of the half-smoke, and a mural of his face remains on Ben’s wall – much to locals’ chagrin.

Ben’s Chili Bowl began marketing the half-smoke in 1958, and is credited with the sausage’s rise to fame. Cosby began dining on the meaty delicacy in the 1960s, and the franchise enjoyed celebrity demand. Their recipe entails smoking the 1/4lb beef and pork sausage, steaming the bun, and finishing the colossal meal with mustard, onions, and chili. A heart attack waiting to happen? Probably. But worth it? Absolutely.

A D.C. staple, apparently. The "half smoke" and chili cheese fries from Ben's. Unsurprisingly this is tasty. Not just a regular dog under there, a custom pork beef sausage with just the right amount of snap. #benschilibowl #halfsmoke #chilicheesefries