The Most Famous & Historic Hotels in Washington DC, USA 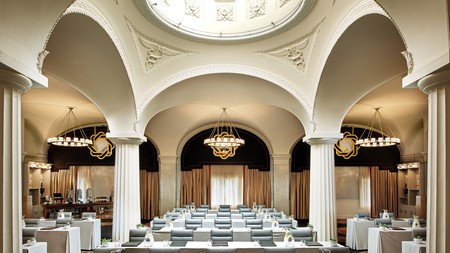 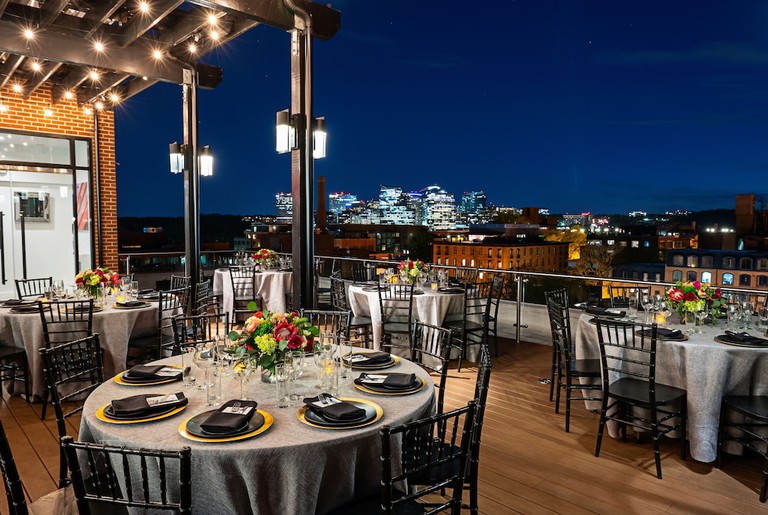 Courtesy of The Graham Washington DC Georgetown / Expedia
View Rooms
This red-brick riverside address is strikingly sited on the banks of the Potomac in DC’s affluent, historic Georgetown area – home to prestigious universities, independent shops and restaurants. Its 57 rooms and suites are sophisticated, themed in grey, blue or white, with marble bathrooms – for full-on glamour, pick the Frank Sinatra Suite. Throughout look for salutes to Alexander Graham Bell, inventor of the phone in this city. And slip down to the craft cocktail cellar then the small-plate dining concept The Alex Craft Cocktail Cellar & Speakeasy.
More info 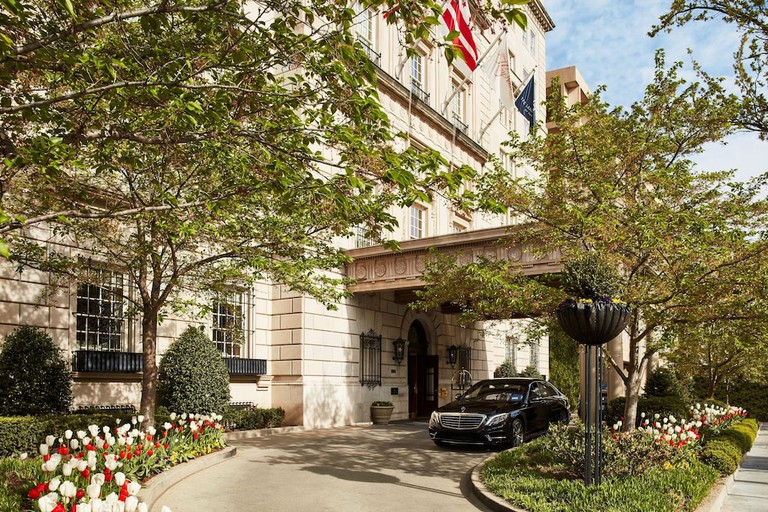 Courtesy of The Hay-Adams / Expedia
View Rooms
Staying here, you’re following in big footsteps: Barack Obama stayed ahead of his presidency. Eco fans will jostle for the Tesla car service laid on around downtown, and the rest of us will love having the White House next door. Just off Lafayette Square, it rolls out rooms and suites bathed almost entirely in cream and white, with ornamental fireplaces and brass lighting. Top-floor White House View rooms have French doors that open onto a balcony. Join insiders sipping after-work cocktails at the aptly named Off the Record bar.
More info 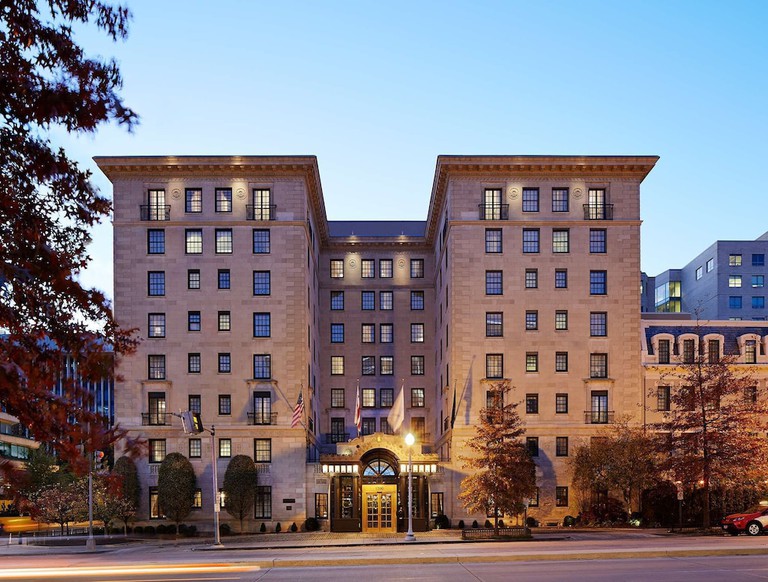 Courtesy of The Jefferson / Expedia
View Rooms
In a town filled with historic hotels, this boutique 1920s building namechecks founding father Thomas Jefferson. Rooms are traditional and comfy – the neutral vibe is lifted by floral outbreaks – and all have iPads; while Deluxe suites also have smart buttons to trigger housekeeping. Guests return for the antiques, marble and wood paneling, as much as for the Michelin-starred restaurant dishing grilled stone bass with Catalina sauce. Four blocks north of the White House, this is a peaceful neighborhood for culture-seekers: the National Geographic Society Museum is minutes away.
More info 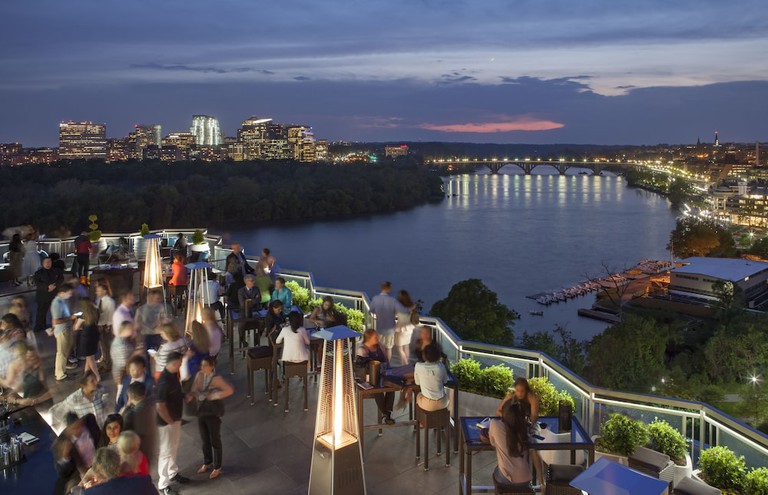 Courtesy of The Watergate Hotel / Expedia
View Rooms
This Georgetown trendsetter merges history – it’s all in the name – and avant-garde architecture that mirrors the curling Potomac River, 1mi (1.6km) from the Lincoln Memorial. Light-infused rooms go funky with linear leather sofas – of course. It’s referencing the 70s, when the Watergate political scandal took place. Bliss out at the sexy silvery-gray spa with a long indoor lap pool. At the Kingbird restaurant, what else would you eat but the Watergate Whisky Burger? And where else would you go afterwards but to the rooftop bar, looking across to the Washington Monument?
More info 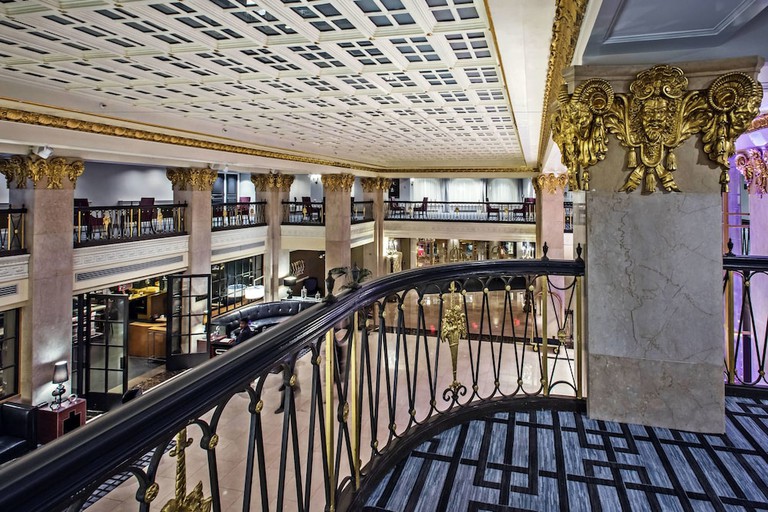 Courtesy of The Mayflower Hotel / Expedia
View Rooms
Grand gold staircases meet twinkling chandeliers overhead – that’s just the opulent lobby of this century-old stalwart beloved of celebrities and big wigs. It’s so well placed, close to the National Mall and blocks from the White House. In DC, politics swirls constantly – the masculine, clubby Edgar Bar & Kitchen is named after J Edgar Hoover, former director of the FBI, who dined here daily. The 581 suites and rooms are contemporary, mixing taupe and plum accents; and the gym is open 24/7, so you might catch a politician burning off their ribeye steak in the early hours.
More info 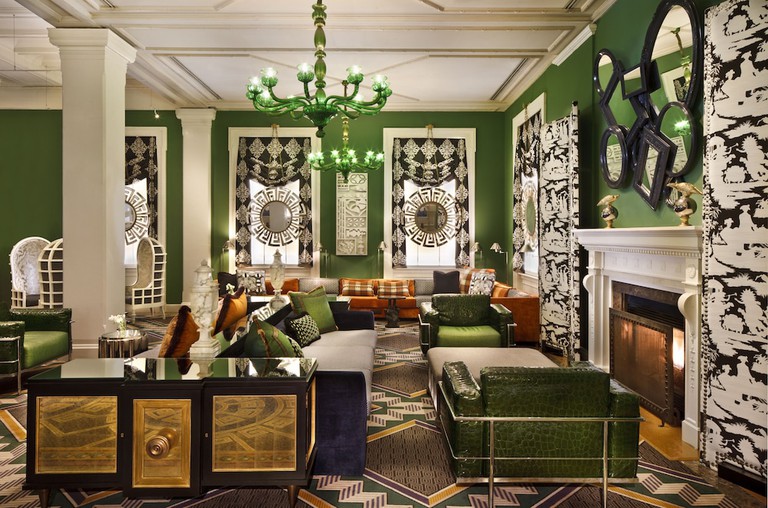 Courtesy of Kimpton Hotel Monaco Washington DC / Expedia
View Rooms
Essentially you’re staying in the 1839 General Post Office building in the Penn Quarter, less than a mile from The White House and the Smithsonian. Now, it has 184 vaulted-ceilinged rooms maxing out modern necessities: Frette linens, signature animal-print robes and yoga mats. Of course, plush period details remain. Do step out and explore the place: the jewel-box living space with emerald-green walls and hand-sculpted tables; and the all-day Dirty Habit restaurant for memorable dishes such as tuna tataki and aromatic truffle fries.
More info 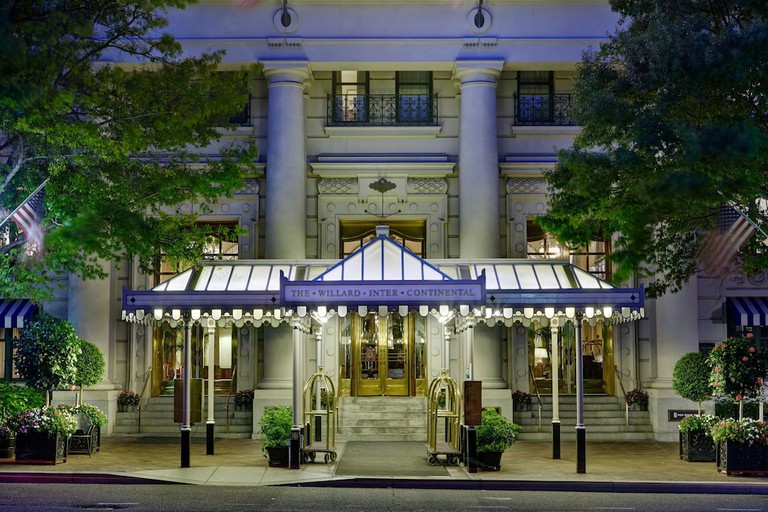 Courtesy of Willard InterContinental Washington / Expedia
View Rooms
They’ve alway called this pile the “Residence of Presidents”: Abraham Lincoln was of many who lived in this stately affair, which elevates history over mod cons. Top tip: entry-level rooms are as good as the Executives and Suites, albeit with less space and grandeur. Linger in the lobby, craning your neck at the Corinthian columns and brass chandeliers. Then proceed to Café du Parc for traditional French dishes. While the Washington Monument is the view from most rooms, do step out to explore revered sights such as the Martin Luther King Jr memorial, just over a mile away on foot.
More info 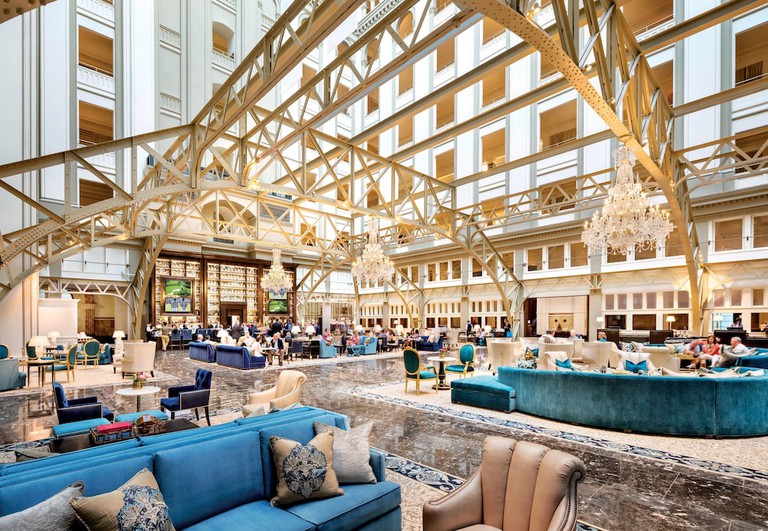 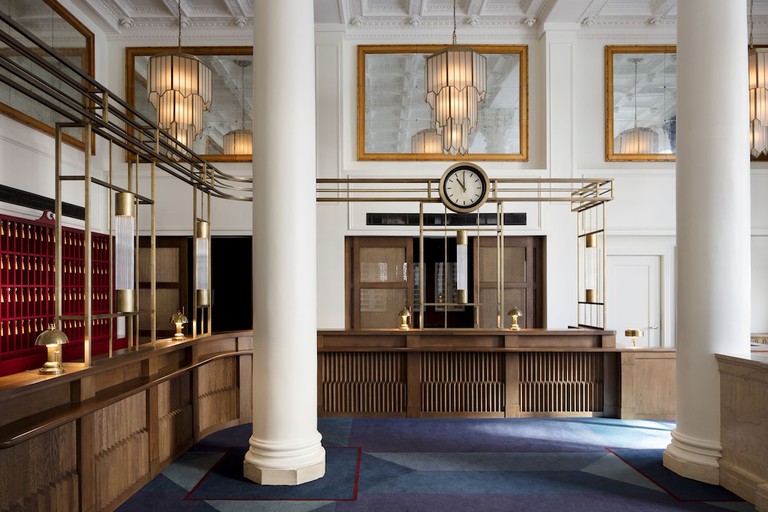 Courtesy of Riggs Washington DC / Expedia
View Rooms
You get fine views of the vibrant Penn Quarter from the 181 guest rooms and suites in this august building, a bank in a former life. The ambience is warm, from the wooden flooring to the bath lotions by fragrance house DS & Durga. This is a style den indeed: paint-stroke-like wallpaper meets headboards in warm shades and Italian Carrara marble bathrooms. First Lady suites up the amenity ante with baby grand pianos. Keep things select with a dozen oysters or duck confit at Café Riggs, among the oversized floral displays.
More info 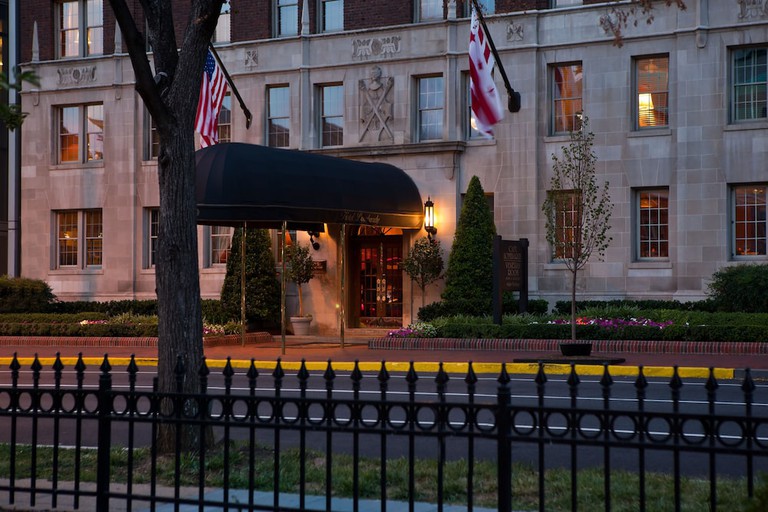 Courtesy of Hotel Lombardy / Expedia
View Rooms
In the Foggy Bottom neighborhood, here’s a paean to old-world charm with an impressive lobby of Renaissance-spirit paintings lit by overhead chandeliers. Ditto the bedrooms, lined with lotus flower art and framed kimono fabrics. Most have a separate breakfast nook with a wet bar. Look for the mailboxes in the hallway, left over from the building’s days as a 1920s apartment block. This is a hotel to idle in: at Café Lombardy order the popular crab cakes and French toast before everyone else does. But step out: in spring, cherry trees bloom along the Tidal Basin.
More info 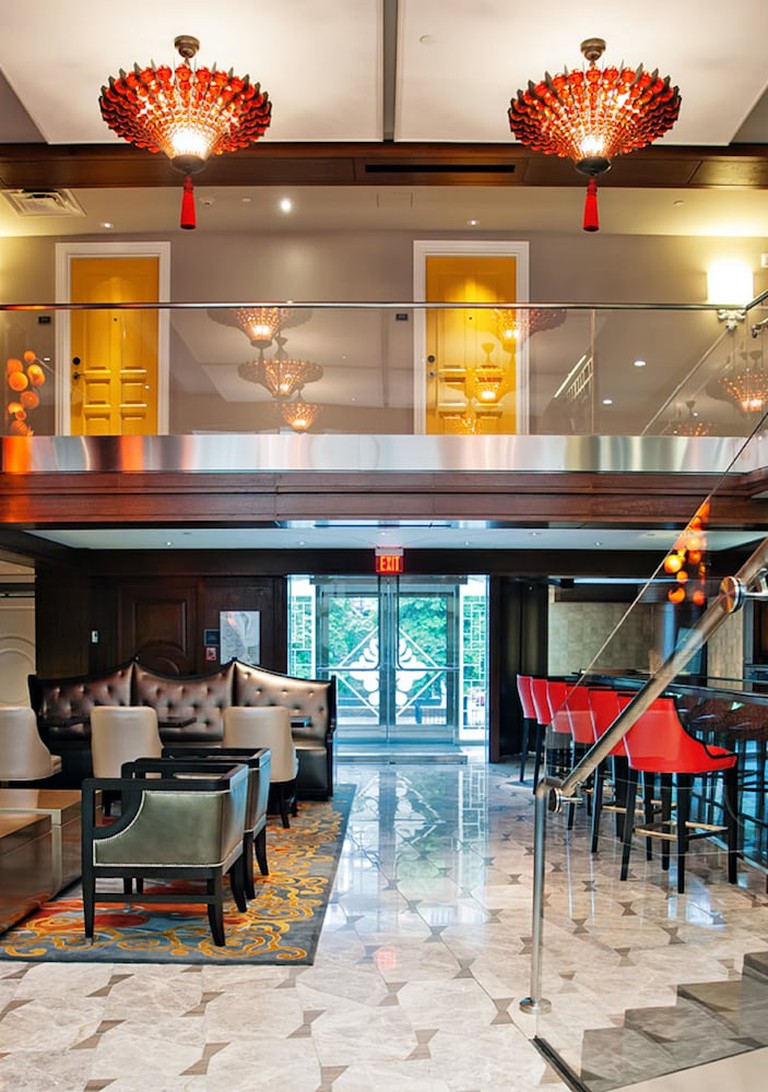 Courtesy of Morrison Clark Inn / Expedia
View Rooms
Buck the big old hotel trend at this Downtown Victorian mansion house, 10-minutes’ walk from the National Museum of Women in the Arts. Once it was home to a wealthy DC merchant, latterly it was a Chinese church; hence the look: traditional Victorian meets Asian meets modernism with polished Italian marble floors, warm woods and wrought-iron ceiling medallions; then a Chinese porch and a Shanghai roof. Rooms do similarly contemporary or Victoriana. In the period-style dining room, try the North American with a twist, say, truffle salt-roasted Atlantic salmon.
More info 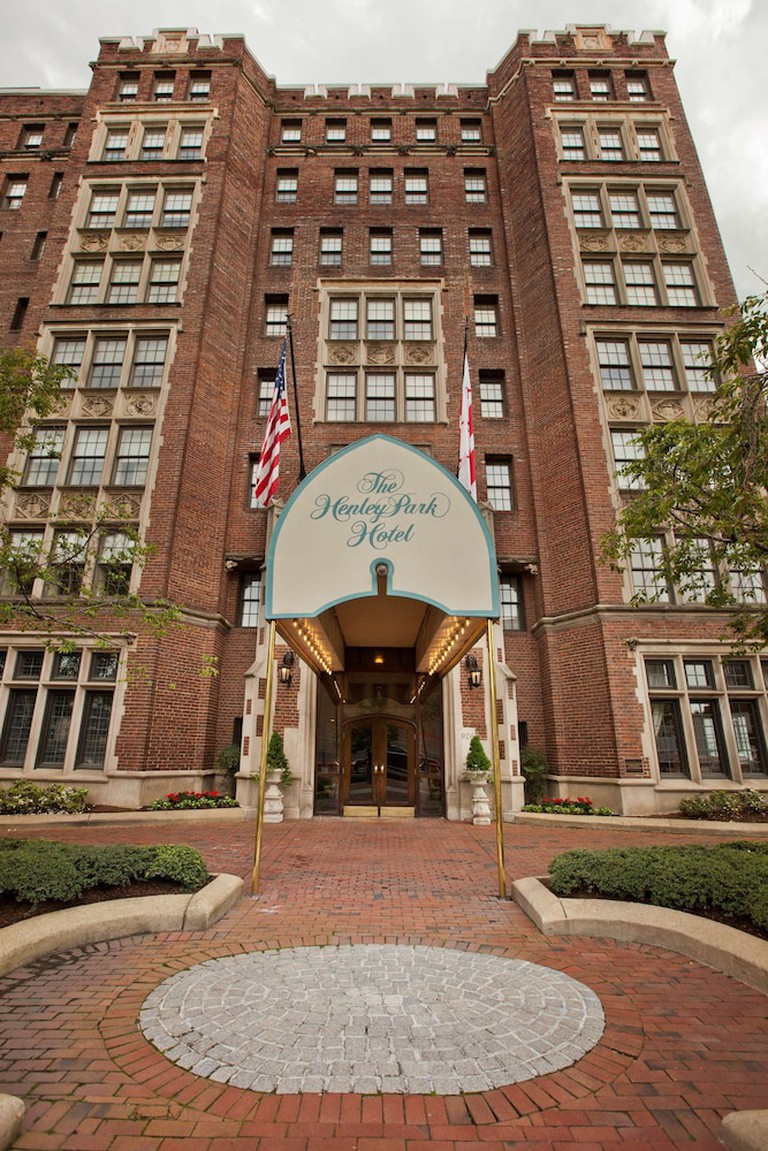 Courtesy of The Henley Park Hotel / Expedia
View Rooms
Smack in the center of the Business District, this Tudor-style comfort zone is a treat. The homely bedrooms burst with floral curtains and bedheads, livening up traditional antique pieces. The Tavern restaurant excels at authentic dishes from regionally sourced ingredients; savour the salmon over asparagus risotto, or NY strip steak seared to perfection. When you’ve walked the surrounding streets spotting famous landmarks, head back for afternoon tea; try the Royal version featuring goat cheese and cranberry scones, and chocolate truffles.
More info
Give us feedback