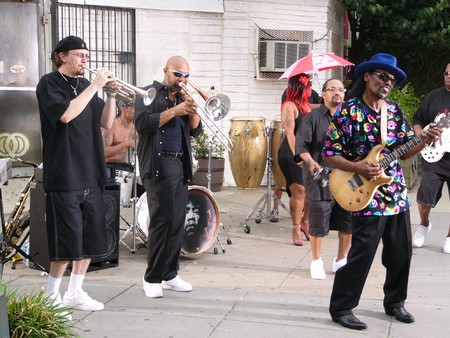 Nashville has country music, New Orleans has jazz, and Washington, D.C. has Go-Go. Named for the genre’s groundbreaking practice of keeping the music going between sets so that songs blend into each other, Go-Go is the convergence of funk, soul, blues, and rap, with African rhythms and Latin beats.

Go-Go arrived on the scene in the ’60s and ’70s and continues today. While it never became mainstream, it is an earmark of Washington, D.C. culture and history. These nine groups defined and evolved the genre from rec center performances to R&B chart-topping songs.

Chuck Brown and the Soul Searchers

Brown is known as the “Godfather of Go-Go” and is credited with creating the genre. He was a Washington, D.C. icon–there is even a street named after him.

Chuck Brown and the Soul Searchers sensationalized Go-Go in 1972 with their debut album “We the People.” Brown continued to perform his funky hits like “Blow Your Whistle” and “Bustin’ Loose” (which inspired pop sensation Nelly’s “Hot in Herre”) until his passing in 2012.

You are looking at greatness and tonight you will receive nothing but that, DMV we love you see you in a few #BYB4LIFE

The BackYard Band considers themselves the Bad Boys of Go-Go. They broke rules when they arrived on the scene in the early ’90s. The group of 10 musicians mixed in rap vocals, bringing new life to an older genre.

The group is led by D.C. native Anwan Glover, an actor known for his role in The Wire. When he’s not acting, he’s back home performing with the BackYard Band. Before he died, Chuck Brown passed the torch to Glover, enlisting his help so their music wouldn’t die. Glover has not let down his mentor. In 2016, the BackYard Band became a hyper-local success story with their cover of Adele’s “Hello,” proving that Go-Go can improve any song.

This band has been a D.C. staple for over four decades. The group formed in 1976, as students at St. Thomas Moore Catholic School in Southeast Washington. Most members were only 12 years old when they started practicing in a basement after classes, covering popular songs from the radio. They were big Chuck Brown fans and reached out to him to ask to copy his signature practice of playing beats between songs. Their first public performance was in an apartment rec center, where they played two songs on repeat.

Rare Essence is credited by The Washington Post for delivering the sound of Go-Go to the people, with popular hits like “Work the Walls.” Over the years, the band members have changed, with more than 30 people being associated with Rare Essence. You can still catch them performing around D.C.

Washington, D.C. is known for its popular Mambo Sauce, and this spicy and sweet band lives up to the name. Go-Go is about the community between the performers and audience, and Mambo Sauce pays homage to their community, with hits like “Welcome to D.C.”

Mambo Sauce is relatively new to the Go-Go scene; the band formed in 2003, and by 2007 had made a name for themselves. They have ushered in a generation of new Go-Go fans while fighting to keep the genre alive. Their song “4G” takes aim at the difficulty of sustaining Go-Go music, and the struggles of it to gain a foothold in the music world.

Washington, D.C. loves this band so much that January 15, 2018 was declared “Junkyard Band Day” by D.C. Mayor Muriel Bowser. This group started in the ’80s as a scrappy group of kids banding on buckets and recycling other items into instruments (hence the name).

In 1986, hip-hop label Def Jam released the group’s single “Sardines,” making the band a household name. At the height of their popularity, they opened for big names like Tupac, Ice Cube, and Salt-N-Pepa.

While Chuck Brown was the creator of Go-Go, Trouble Funk brought originality. Founded in 1975, Trouble Funk was the first band to do original songs and lyrics in the Go-Go method. They began by performing the early set at Club LeBaron before Chuck Brown came on.

In the ’80s, one of their biggest hits, “Drop the Bomb”, was inspired by a chanting audience who wanted the man playing the synthesizer to make the noise that sounded like a bomb. While Trouble Funk achieved moderate success, many of their beats were sampled by artists on tracks that went on to be platinum records. Over 40 years later, Trouble Funk is still going strong and performing around the city that gave them their start.

After the passing of Chuck Brown, his band forged on, fighting to keep the music alive. They posthumously co-produced the album “Beautiful Life.” The album features five of Brown’s unfinished songs, and four new tracks featuring his mentees and daughter Takesa “KK” Donelson. She has her father’s musical talent and raps on the track “Still Crankin.”

The band frequents performance halls during celebrations of Go-Go music. This April, they performed at the Kennedy Center. They have stayed true to Brown’s vision of nonstop beats and audience participation.

This band was formed by students of XX High School. Their name is a nod to the Jimi Hendrix Experience, and they brought a rock edge to Go-Go. Known locally as EU, the band is led by singer and bassist Gregory “Sugar Bear” Elliot. The band started during the golden age of Go-Go, and enjoyed acclaim for the song “Da Butt” in 1988, which is featured in Spike Lee’s film “School Daze.” It hit number 1 on the Billboard’s R&B charts.

The band took Go-Go outside of Washington, D.C., and even out of the United States. They performed in Japan, Antigua, Bermuda and did two USO tours to visit the troops. Though the main members have changed over the years, you can still catch them performing around Washington, D.C.

TCB created a new form of Go-Go that uses ‘bounce beat.’ It is more discordant and aggressive than traditional Go-Go. Instead of relying on the congas, TCB’s bounce beat uses much heavier, louder timbales. Some of the Go-Go legends don’t approve of the new technique, but that doesn’t stop TCB from being incredibly popular in the District.

TCB’s new style was created in 2003, when a bad PA system required the band to play heavier and slower to be heard. It was an immediate hit and became the signature sound of the band. Band leader Reggie “Polo” Burwell was considered the King of the Bounce Beat, and made the biggest change to Go-Go since Chuck Brown created the genre. Though Burwell passed away in 2013, the band continues to evolve the genre and perform.