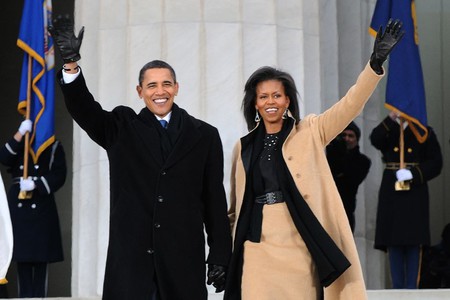 Figurative portraitists Kehinde Wiley and Amy Sherald joined the former U.S. president and first lady in Washington, D.C. on Monday morning to reveal their respective renderings of the political power couple. Both portraits are paradigmatic of each artist’s aesthetic, and both showcase Mr. and Mrs. Obama as independently poised, powerful, and calm American icons.

Today, @KehindeWiley and @ASherald became the first black artists to create official presidential portraits for the Smithsonian. To call this experience humbling would be an understatement. Thanks to Kehinde and Amy, generations of Americans — and young people from all around the world — will visit the National Portrait Gallery and see this country through a new lens. They’ll walk out of that museum with a better sense of the America we all love. Clear-eyed. Big-hearted. Inclusive and optimistic. And I hope they’ll walk out more empowered to go and change their worlds.

Barack Obama stated his admiration of Wiley’s practice, which “challenges our conventional views of power and privilege,” according to NPR; and while he rejected Wiley’s initial desire to “elevate” Obama by situating him on a horse, the former president joked that he did try “to negotiate less gray hair [and] smaller ears.” At the unveiling, he called the finished product “pretty sharp.”

In her speech at the National Portrait Gallery on Monday, Michelle Obama admitted to feeling “a little overwhelmed, to say the least.” Nodding to “young people, particularly girls and girls of color who … will see an image of someone who looks like them hanging on the wall of this great American institution,” the former first lady continued, “I know the kind of impact that will have on their lives, because I was one of those girls.”

Barack and Michelle Obama's official portraits were unveiled at the Smithsonian's National Portrait Gallery on Monday, a rite of passage for most former presidents, all of whom have their portraits hanging in the museum. The former president chose Kehinde Wiley, a Yale University-trained painter famous for his depiction of African-Americans posed in the style of Old Master paintings, regal, formal and filled with pops of color. The former first lady chose Baltimore-based artist Amy Sherald. Sherald is another African-American artist known for her unique style, and her portraits also tend to underscore themes of social justice. 📸 Saul Loeb/Getty Images #barackobama #michelleobama #nationalportraitgallery #smithsonianmuseum #portraitart #amysherald #kehindewiley #cnn

“Official portraits are interesting beasts because they are, of course official: they signify the status and attainments of the person portrayed,” explains the National Portrait Gallery. “But they also are deeply personal, even revelatory, portrayals that say something of the character of the man or woman who shows their face to the public.”

On Tuesday, February 13, both portraits will be exhibited to the public at the National Portrait Gallery. Wiley’s portrayal of Barack Obama will be on view in the “America’s Presidents” gallery alongside 1,600 other presidential portraits. Sherald’s portrait of Michelle Obama will go on view in the gallery’s “Recent Acquisitions” corridor.

“This is consequential—it’s who we as a society decide to celebrate,” Kehinde Wiley said. “This is our ability to say, ‘I matter. I was here.’ ”