#APeoplesJourney: What to Expect at the National Museum of African American History & Culture 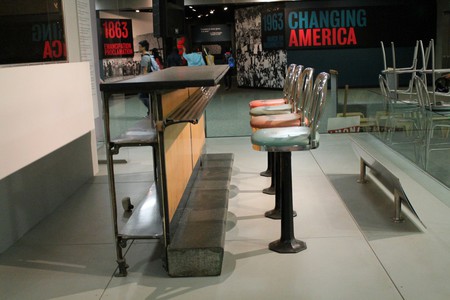 “Every great dream begins with a dreamer. Always remember, you have within you the strength, the patience, and the passion to reach for the stars to change the world.” –Harriet Tubman

The National Museum of African American History and Culture (NMAAHC) is unlike any other museum in America, and the response since it opened its doors on September 24, 2016, has been overwhelming; more than one million people have crossed the threshold since that day.

This museum is different because it “is the only national museum devoted exclusively to the documentation of African American life, history, and culture.” Whatever your expectations, the building, exhibits, artifacts, and programs will change your mind forever about black history and culture and what it means to be black in America. As Paul Gardullo, one of the museum’s 15 curators, said before the museum’s opening: “The American story is profoundly African-American. You don’t get America without African America; you don’t get our struggle for equality. And you don’t get jazz. You don’t get rock ‘n’ roll.”

As wildly popular as the museum’s opening was, that response pales in comparison to the hundreds of thousands of people that continue to clamor for a chance to visit, which is why you can expect to wait months just for the chance to reserve advance tickets – but it will be worth the wait.

Should you be lucky enough to reserve a time slot, Culture Trip thought you might find it helpful to know what to expect when you go.

Set on the last plot of undeveloped land on the National Mall in a five-acre green space, the museum is surrounded by significant landmarks and monuments dedicated to figures that have played important roles in the lives and history of African Americans. Lying just south of the White House, the museum opened its doors in 2016 at a time when Barack Obama, the first black president in history, was in office. Just across the street lies the Washington Monument, whose namesake was a slave owner; further west is the Martin Luther King, Jr. memorial; and to the south is the Thomas Jefferson Memorial, another former president who owned slaves, including his children.

Beauty on the inside and the outside

When you first approach the museum, it rises from the ground and commands your attention, not because it’s a classically beautiful structure but because there’s something organic and completely natural and familiar about the rusted bronze and brown metal lattice panels that wrap the glass-walled building in three tiers. The building is the work of lead designer David Adjaye and lead architect Philip Freelon of Freelon Adjaye Bond/SmithGroup, the firm that won the museum’s international design competition in 2009. He wanted the façade of the museum to be the prologue to the stories told inside and used the three-tier motif to reflect the caryatids found in Nigerian architecture, which include a column with a base and a figure holding up a capital or crown and the triple crowns worn by Yoruba kings.

As Mr. Adjaye said in an interview with the New York Times in 2016, “I was completely moved by the corona motif. It seemed like a way to start to tell a story that moves from one continent, where people were taken, along with their cultures, and used as labor, then contributed towards making another country and new cultures. That history then continues in the decorative patterning of those panels.” To fully appreciate the brilliant design, the best views of the museum are at night when the structure appears to be floating, and its outer skin is illuminated and casts a glow over the landscape. 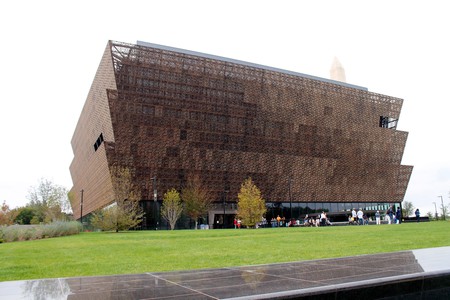 It’s what’s on the inside that counts

To accurately tell the history of the African Diaspora, and generations of their descendants, the museum chose to organize the galleries and exhibits chronologically on different levels and uses architectural design to provide visual, emotional, and physical context. To fully appreciate the breadth and power of the museum, this is the order in which you should see the history exhibits, which begin on the first level located 70 feet (21.3 meters) below the surface. This level covers the slave trade era to emancipation, and on the second level, which is also below ground, the galleries examine the segregation era to today.

Once you reach ground level, the museum space opens up, the sun’s rays stream through the glass walls and exterior lattice work, and your spirits are naturally uplifted by the change in light, scenery, and subject. On the third floor are artifacts, video, movie clips, and the accomplishments of African Americans in film, theater, art, music, sports, and the military. But one of the museum’s best-kept secrets and hidden gems is the Visual Art and the American Experience, the only permanent art exhibition on the Smithsonian Mall devoted entirely to painting, sculptures, works on paper, and other mediums created by African American artists. The quality of the paintings and works included are second to none.

Most museums have years to amass artifacts, do research, and put together exhibits that can stand the test of time, but in only about 10 years, before groundbreaking, the Smithsonian’s National Museum of African American History and Culture collected more than 36,000 precious artifacts. And unlike other museums that have acquisition budgets, this museum’s objects were all donated by the owners, who wanted to help preserve their family’s heritage for posterity, to share a unique part of history or something that reflected a part of the black experience. 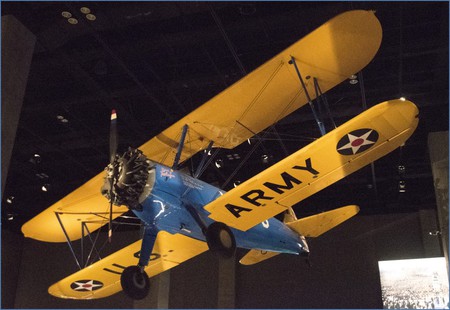 You can’t celebrate African American history and culture and not have a well-stocked gift shop to share the experience with friends and family or keep in your home as a souvenir. You can find the Museum Shop on the first floor, where you can shop for gifts, clothing, and items exhibited in the museum, from woven baskets to quilts.

After all the walking, emotionally moving exhibits, and shopping, the best way to recharge and sate your hunger is at the museum’s restaurant, Sweet Home Café. To keep things authentic and provide a fantastic dining experience, celebrity chef Carla Hall consulted on the menu and recipes along with executive chef Jerome Grant. Together, they created a menu that reflects the African Diaspora larder and food traditions from four regions in America: the South, the Creole Coast, the Northern state, and the Western range. The result is a menu that cherishes culinary traditions and ingredients from Africa that reflect American dishes like buttermilk fried chicken and collards, crawfish gumbo and pickled okra, Yankee baked beans, and cowboy-style BBQ buffalo brisket.

What the museum is not

Rather than make this a museum that speaks only to the suffering of generations of Africans and African Americans, it intends to preserve the stories of countless millions whose voices and culture have either been ignored, considered less than, or wiped from history.

The exhibits instruct, share, and celebrate what’s beautiful about the black experience but don’t flinch about telling the truth about centuries of slavery, racism, segregation, and second-class status and their effects on blacks.

The museum’s organizers, including Lonnie G. Bunch III, the museum’s founding director, never lost sight of the crime of slavery and the stain it has left on America. Just before the museum opened in 2016, he said, “We wanted to make sure you felt the pain of slavery, but you also pondered what it meant when one group of people did this to another group. Slavery was not the only way to define people. They had a strength that I wish I had.” 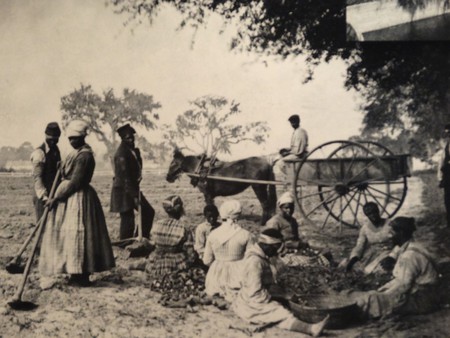 African Slaves in the South/ | ©denisbin/Flickr

One thing everyone should know before they go: there are no substitutes for good walking shoes because you will need them at this sprawling 85,000-square-foot (7,897-square-meter) space, and once you’ve prepared yourself for that, the rest is logistics.

Tickets are free of charge, but you must go online to reserve timed entry passes for both same-day and advance passes. However, advance passes are nearly impossible to get as well. Currently, the earliest advance tickets available are for visits in July 2017, and you can only enter for a chance to register for tickets in July in April of 2017. Despite the pre-reservation process for tickets, expect huge crowds and long lines for everything from getting into the museum to the gift shop and café, the exhibits, and the different levels.

If you are lucky enough to reserve tickets, take a “Know Before You Go” approach and do some homework so that you can get the most from the limited time you have at the museum.

Explore the range of first-hand accounts of visitors by using the hashtag #APeoplesJourney to review photos and posts on Twitter and Instagram. Also, download the museum’s mobile app to get daily updates on what’s happening at the museum, view the events calendar, images and artifacts from collections, learn more about the exhibits, and find information on book discussions and other programs.

Read the FAQ section on the museum’s website carefully to make sure you understand how and when to arrive, learn about entry procedures and what items are prohibited, and how to navigate the museum and its exhibits.

Read the Smithsonian visitor maps for directions to the National Museum of African American History and Culture, Washington Monument, and the National Mall.

Navigating D.C.’s streets aren’t advisable, and parking options are limited unless you pay more than $25. Take public transportation instead and get the details at the Metro system’s website, WMATA.com.

Be prepared to go through a security screening, and don’t carry large bags and backpacks, or bring a see-through bag. And read the museum’s list of prohibited items. 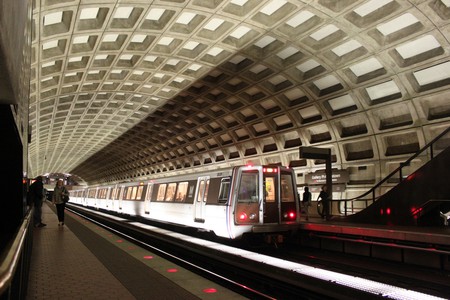