A Brief History Of The Library of Congress, Washington

Located in Washington, D.C. and the Packard Campus in Culpeper, Virginia, The Library of Congress is one of the largest libraries in the world, holding an estimated 150 million items. Featuring 883 miles of shelving, the immense collection includes research materials in more that 450 languages and in many mediums. With its extensive and rich history, we explore this monumental cultural institution. 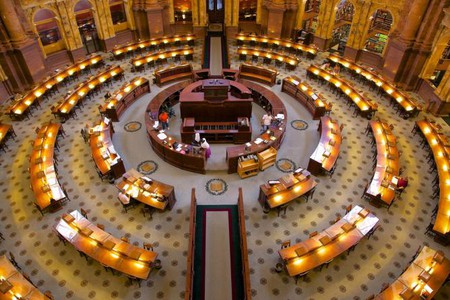 Materials come to the Library of Congress through an acquisitions programme that extends throughout the world and includes over 15 thousand agreements with foreign governments and research institutions for the exchange of research materials. Each day about 31 thousand items arrive at the Library and approximately seven thousand of these items will become part of the permanent collections. The collections now include more than 15 million books, 39 million manuscripts and 12 million photographs. The Library’s collection of more than 5,600 incunabula (books printed before 1500) is the largest in the Western Hemisphere and its vast collection of media is known to be the largest in the world.

The Library’s first home was actually in a boarding house until it was moved to the US Capital at a later date. The first permanent building in the Library was opened in 1897, 97 years after its original founding. This building was originally suggested by Librarian of Congress Ainsworth Rand Spofford in 1871, and eventually completed in 1897. After two design competitions and a decade of debate about the location, in 1886 Congress finally chose an Italian Renaissance plan submitted by Washington architects John L. Smithmeyer and Paul J. Pelz. Structurally the architects followed the basic idea proposed by Librarian Spofford: a circular, domed reading room at the Library’s various departments. With its elaborately decorated facade and interior, its 23-carat gold-plated dome was greatly received at its opening to the American public on November 1, 1897. Formerly known as The Library of Congress (or Main) Building, it was named in 1980 by Thomas Jefferson, the Library’s principal founder.

The second Library building, originally called the Annex Building, was opened in 1980. The structure’s name honours John Adams, the man of letters and president of the United States who in 1800 approved the law establishing the Library of Congress. Today, the building’s decorative style, which contains elements of Art Deco (inspired by the Exposition des Arts Dècoratifs held in Paris in 1925), is widely admired. The history of the written word is depicted in sculptured figures by Lee Lawrie on the bronze doors at the West (Second Street) and East (Third Street) entrances. On the fifth floor, the north reading room is decorated by murals by artist Ezra Winter that illustrate the characters in Geoffrey Chaucer’s Canterbury Tales.

Librarian of Congress L. Quincy Mumford initiated plans for a third Library building in 1957. The James Madison Memorial Building was completed in 1981, serving both as the Library’s third major structure and the nation’s official memorial to James Madison, the ‘father’ of the Constitution and the Bill of Rights, and the fourth president of the United States. Modern in style, the Madison Building was designed by the firm of DeWitt, Poor and Shelton, Associated Architects. It is one of the three largest public buildings in the Washington, D.C area (the others are the Pentagon and the F.B.I. Building) and houses the Librarian’s Office, the Copyright Office, the Congressional Research Service, the Law Library and a variety of special collections. Its meeting rooms are often the scenes of free poetry readings and panel discussions, and its exhibition areas are constantly filled with treasures from the Library’s collections. All three of these buildings are connected by underground passageways.

The Packard Campus is the newest addition to the Library, located in Culpeper, Virginia. This site is dedicated to archiving the media collections and converting items into digital formats. Its storage facilities include 35 climate-controlled vaults for sound recording, safety film and videotape, and 124 individual vaults for more flammable nitrate film. The Campas hosts a regular series of film and television programming in its 206 seat theatre, its projection booth capable of showing everything from nitrate film to modern digital cinema.

Its collection of Luso-Hispanic materials is the largest in the world. The Library of Congress also offers books for the blind. There are sound recordings as well as braille books, and in recent years all recordings have begun to go through the process of being converted to digital format. The Library has focused on providing reading opportunities to the blind since 1931. Since 2006, The Library of Congress has been collecting every single public tweet ever made on Twitter and archiving them digitally, collecting more than 50 million tweets a day. The smallest book in The Library of Congress is Old King Cole at 3 x 3 cm, and the largest book is at 1.5 by 2 metres featuring colour images of Bhutan. One of the oldest examples of printing in the world, passages from a Buddhist sutra printed in 770 A.D., is housed in the Library’s Asian Division. The oldest written material in the Library is a cuneiform tablet dating from 2040 B.C.

The Library of Congress is open to the public for academic research and tourists, however, only Library employees, Members of Congress, Supreme Court justices and other high-ranking government officials may check out books. The Library holds various exhibitions around the collections throughout the year and promotes literacy and American literature through projects such as the American Folklife Center, American Memory, Center for the Book and Poet Laureate. It organises a number of annual events including the Founder’s Day Celebration and The National Book Festival.