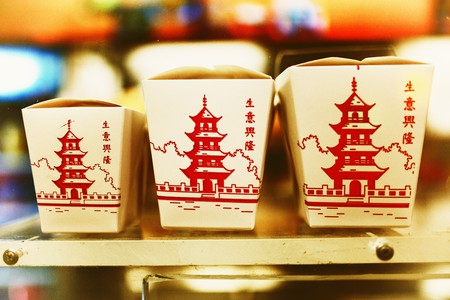 Mambo sauce, mumbo sauce, tomayto, tahmato. No matter how you spell it, Mambo Sauce is a Washington, D.C. treasure. The sweet, spicy sauce is reminiscent of Chinese sweet and sour sauce mixed with ketchup. Wondering where to apply this bright reddish-orange delicacy? If you ask a Washingtonian, the answer is: on everything.

When in DC, do as the locals do…#WashingtonDC #mumbosauce #jetsetter #DMV

In the District you’ll find it in served in Korean food, fried chicken, and half-smokes. Mambo Sauce is thinner and runnier than traditional barbecue sauces, created from a mix of white vinegar, soy sauce, tomato paste or ketchup, sugar, hot sauce, and citrus juice. It goes equally well on chicken as it does to dip fries in.

To understand more about how this novelty came to exist, you have to go to the source: Chicago. That’s right, D.C.’s most famous sauce isn’t even from D.C.

Mambo sauce came on the scene in Chicago in 1957 at Argia B’s Bar-B-Q, where everything was drenched in the original “Mumbo Sauce.” How it got from the Windy City to the capital is a little vague, but it’s been a D.C. staple ever since.

In the 1960s, Mambo Sauce began cropping up in restaurants such as Wings’ N Things (who claims invention of it) and Johnny Boy’s. Now, everywhere from Chinese restaurants to upscale restaurants like the Hamilton use it.

Don’t come to the Super Bowl party empty handed. #mambosauce is the gift that keeps on giving. Grab a bottle from one of our 350+ retail locations from NY to VA and everywhere in between. Check our website for a full list of locations. (📸 @pmikethewyse)

In more recent times, there was a long trademark court battle between Capital City Mumbo Sauce and the original trademark holder, trying to claim the name Mumbo Sauce for Washington, D.C., arguing that the term was generic and a household name, like Kleenex.

“Philly has cheesesteaks. Chicago has deep-dish pizza. We have mumbo sauce, and it’s our thing,” argued Arsha Jones of Capital City Mumbo Sauce.

In 2013, Jones lost and the court ruled that D.C. businesses cannot use the term “mumbo.” Jones vowed to fight the ruling and said that Capital City Mumbo Sauce was keeping the name “until someone beats down our door.”

It is now known as Capital City Mambo Sauce.

You can pick up a bottle at 7 Eleven, Walmart, Safeway, and various grocers around the District. It is also available online.

To try the sauce while in Washington, D.C., try Ben’s Chili Bowl, Smokey’s in Petsworth, and Yum’s Carryout on 14th Street.